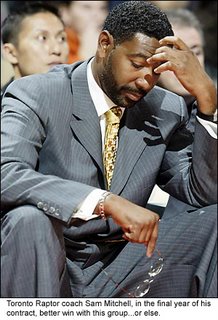 The Raptors finally met their match in the preseason, losing 108-97 to the Chicago Bulls last night, finishing the exhibition schedule at 7-1. Losing to the Bulls is nothing new for Toronto as it’s been dominated by Chicago of late. And there’s no shame — this Bulls’ team has a chance to join the elite […]

By RotoRob
Posted in Courtside, RotoRob | No Comments »

We just have time for a few quick notes as the RotoWidow and I have to head out to hockey shortly. So I’ll dispense with the intro, other than to say the Raps stayed perfect for the preseason with a big comeback 106-102 win in Boston. Notes: Chris Bosh sat out another game. He needs […]

Oh sure, it’s just preseason, but the Raptors are 6-0 after yesterday evening’s 91-90 squeaker win over the Cleveland Cavaliers. What encouraged me the most was the fact that Toronto was without its top player (Chris Bosh, sore left heel), its point guard (T.J. Ford, sore left hammy) and its top rookie (Andreas Bargnani, sore […]

By RotoRob
Posted in BASKETBALL, Courtside, RotoRob | No Comments »