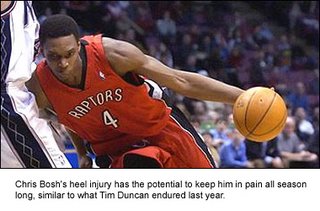 Oh sure, it’s just preseason, but the Raptors are 6-0 after yesterday evening’s 91-90 squeaker win over the Cleveland Cavaliers.

What encouraged me the most was the fact that Toronto was without its top player (Chris Bosh, sore left heel), its point guard (T.J. Ford, sore left hammy) and its top rookie (Andreas Bargnani, sore left ankle), while the Cavs started their regular lineup. Also impressive is the almost immediate chemistry this team is showing despite having to integrate nine new faces into the system. I assumed it would take 20 to 25 games for this club to gel, but from the looks of it, the Raptors are already playing extremely well together.

As for the walking wounded, while none of the Raptors’ injuries are serious (had this been a game that counted, they would have all been out there), if you own Bosh, there is a growing concern over this ailment that’s held him to three exhibition games so far. Coach Sam Mitchell said keeping him out was a precautionary move, but he admitted Bosh is in pain. He said that they’re trying to get Bosh pain free before the season starts, but that he’ll likely play in pain all season. It’s a similar injury to the one that rendered Tim Duncan less than fully effective last year. I think there needs to be a bit of a red flag over this one.

Observations from the game:

By RotoRob
This entry was posted on Monday, October 23rd, 2006 at 4:49 am and is filed under BASKETBALL, Courtside, RotoRob. You can follow any responses to this entry through the RSS 2.0 feed. You can skip to the end and leave a response. Pinging is currently not allowed.