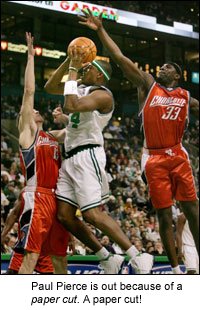 We just have time for a few quick notes as the RotoWidow and I have to head out to hockey shortly. So I’ll dispense with the intro, other than to say the Raps stayed perfect for the preseason with a big comeback 106-102 win in Boston.

By RotoRob
Tags: Boston Celtics
This entry was posted on Thursday, October 26th, 2006 at 7:53 pm and is filed under BASKETBALL, Courtside, RotoRob. You can follow any responses to this entry through the RSS 2.0 feed. Both comments and pings are currently closed.