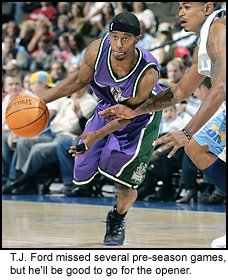 The Raptors finally met their match in the preseason, losing 108-97 to the Chicago Bulls last night, finishing the exhibition schedule at 7-1. Losing to the Bulls is nothing new for Toronto as it’s been dominated by Chicago of late. And there’s no shame — this Bulls’ team has a chance to join the elite squads of the Eastern Conference this season.

The preseason is now over, and the real games start on Tuesday. For those in last-minute drafts this weekend, here are some random observations to help you navigate your way to success:

By RotoRob
This entry was posted on Saturday, October 28th, 2006 at 6:03 pm and is filed under Courtside, RotoRob. You can follow any responses to this entry through the RSS 2.0 feed. You can leave a response, or trackback from your own site.