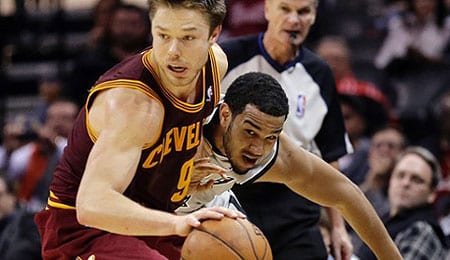 The Wire Troll: Drew Gooden to the Rescue

Bradley is finally starting to return to full strength after being plagued by a chronic ankle injury. His scoring has improved over the last several games and it shouldn’t be long before he regains his starting job.

Okay, Fantasy hoopsters, we’ve come to that all important part of the season when, for those of you in ESPN leagues and likely others, the playoffs are upon us. Now is the time to pay close attention to every injury (minor or major) and also be sure to follow NBA happenings on a daily/nightly basis. Also, it’s a good idea to prepare a list of free agent players that can be inserted should you want to take advantage of the extra man games afforded during a playoff matchup (typically two weeks in length). Here are some recommendations for those of you in deeper leagues.

RotoRob Fantasy Baseball Weekly Podcast, heard every Thursday at 9 p.m. EST on Blogtalkradio, returned this week for around round of preseason baseball news and analysis as you prepare for the 2014 Fantasy baseball season. RotoRob was once again joined by RotoRob.com NBA Writer Bob Raymond, and special guest John Rotondo of RotoDerby.com.