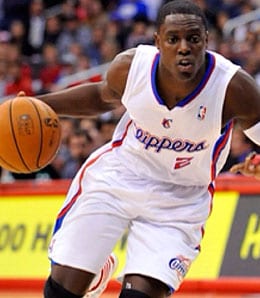 Okay, Fantasy hoopsters, we’ve come to that all important part of the season when, for those of you in ESPN leagues and likely others, the playoffs are upon us. Now is the time to pay close attention to every injury (minor or major) and also be sure to follow NBA happenings on a daily/nightly basis. Also, it’s a good idea to prepare a list of free agent players that can be inserted should you want to take advantage of the extra man games afforded during a playoff matchup (typically two weeks in length). Here are some recommendations for those of you in deeper leagues:

Darren Collison, PG, Los Angeles Clippers: Collison has been playing his best basketball of the season paired with Chris Paul in the Clippers backcourt. Coach Doc Rivers was forced into this combination because of injuries suffered by shooting guards Jamal Crawford and J.J. Redick. With the Clips now riding a 10-game win streak and Crawford and Redick’s status unknown, it’s time to get Collison into your lineup. Collison managed 14 points Friday, which would have been more had it not been for Gordon Hayward of all people flashing some monster block skills, as you can see in the video below. Hey, we can’t make this shit up!

Gary Neal, SG, Charlotte Bobcats: Neal has been a key to the Bobcats’ offense since coming over from Milwaukee at the trade deadline. He’s best known for his scoring prowess including three-point shooting (six in his last two games) and efficient foul shooting (86.3 per cent).

Shaun Livingston, PG, Brooklyn Nets: It can be said that Coach Jason Kidd’s insertion of Livingston into the starting lineup is what turned the Nets’ season around. Livingston has proven to be the glue of this Nets’ squad with a knack for assists, steals and efficient rebounding from the guard position.

Nick Young, SG/SF, Los Angeles Lakers: Young (knee) is slated to return to the Laker lineup on Wednesday. He had been one of the few bright spots for the Lakers this season, averaging 16.8 points and 1.7 treys, so should your team be in need of a legitimate scorer for the playoff drive, give him serious consideration.

Ryan Kelly, PF, Los Angeles Lakers: Kelly has been reinserted into the starting lineup at the four. While he suffers through bouts of offensive inconsistency, he offers a multitude of Fantasy stats from power forward including threes, steals and blocks.

Jeff Adrien, PF, Milwaukee Bucks: Acquired from Charlotte for the aforementioned Neal, Adrien has been a pleasant surprise off the Buck bench. During his last six contests, he’s averaging 11 points, six rebounds, and over one block.

Draymond Green, SF, Golden State Warriors: The Michigan State draftee is proving to be a valuable bench player for the Warriors. This was on display on Friday when Green registered 18 points and nine rebounds against Cleveland. He’s also capable of meaningful assists and steals when provided with sufficient playing time.

P.J. Tucker, SF, Phoenix Suns: The Rodney Dangerfield of Fantasy basketball gets absolutely no love from owners. It’s hard to believe that Tucker is only owned in 10.7 per cent of ESPN leagues. Over his last five games, he’s averaging 12 points, nearly 10 rebounds (yes that’s correct!) and 2.5 steals. Be the smartest owner in your league and have Tucker on your roster for the championship quest.

Kris Humphries, C/PF, Boston Celtics: Humphries is a must own for those of you in need of scoring and rebounding help. As the latest “flavour of the month” at centre for the Shamrocks, Humphries has averaged 15 points and 9.5 boards during his last four outings.

Chris Andersen, C/PF, Miami Heat: The “Birdman” won’t help you offensively, but he can rebound and block shots. With the Heat lacking depth in the frontcourt, Andersen should continue to see consistent playing time for the two-time defending champs.

Tiago Splitter, C/PF, San Antonio Spurs: Coach Gregg Popovich likes to mix and match his lineups depending upon the opposition. Splitter happens to be one of the players that can benefit or fall victim to such decisions. At the same time, he’s capable of being a Fantasy asset when receiving ample opportunity.

By Bob Raymond
Tags: NBA
This entry was posted on Saturday, March 15th, 2014 at 6:07 pm and is filed under BASKETBALL, Bob Raymond, The Wire Troll. You can follow any responses to this entry through the RSS 2.0 feed. You can skip to the end and leave a response. Pinging is currently not allowed.