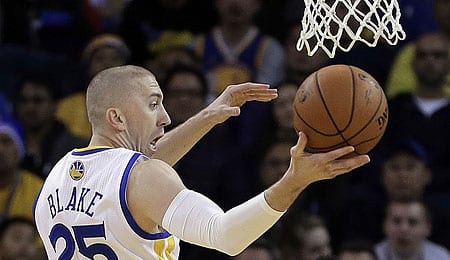 Steve Blake is sure to see far less PT for the Warriors. (Ben Margot/Associated Press)

In this edition of The Wire Troll we take a different approach and review the Fantasy impact of the NBA’s trade deadline on Thursday. We didn’t see any of the blockbuster trades that had been rumoured, but several players do have new teams as we enter the home stretch of the regular season. Let’s examine the Fantasy impact of the consummated trades as Fantasy owners look to new dynamics to exploit.

The Warriors have suffered from a lack of bench depth all season long and have added Blake and Jordan Crawford to address this issues. Blake suffers a big drop in Fantasy relevance here (as did Crawford when coming over from Boston in a separate deal), and will mainly back up starting PG Stephen Curry. As expected, Blake is taking the move like a pro, and sounds excited to see what he can learn under Warrior coach Mark Jackson (see video below). As for the Lakers, Bazemore and Brooks (15 and 14 points respectively) were on centre stage Friday and led the Lakers to victory. With all of the injuries and subsequent experimenting being done by coach Mike D’Antoni, these two youngsters will likely have the opportunity to produce. Keep an eye on both over the next week or so. As part of the deal, the Lakers also received a $2.8 million trade exemption, which could be a valuable chip in the offseason.

The Cavaliers have won five of their last six games and owner Dan Gilbert dearly wants them to make the playoffs. So Cleveland decided to hold onto pending free agent Luol Deng and instead of selling, bought — acquiring Hawes at the deadline. Hawes was having a banner season for the 76ers (12.9 points, 8.6 rebounds, 3.3 assists) and will become the starting centre for the Cavs. The change in scenery should help as recent Sixer fortunes (lost 13 of 14 games) had seen his production slump somewhat. The oft-injured Anderson Varejao is much better suited for a bench role and takes a negative hit in Fantasy value with this move (although if it helps keep Sideshow Bob healthy, it’s good for his overall value).

The duo of Arnett Moultrie and Byron Mullens (acquired from the Los Angeles Clippers) will fill the role vacated by Hawes with Moultrie having the potential for greater Fantasy value.

While the Pacers improved their bench for a potential run at an NBA championship, Turner’s Fantasy value weakens. He should play approximately 25 minutes off the pine and will not see the shot opportunities or court time he was receiving in Philly. As for Granger, his skills have diminished rapidly since suffering from serious knee problems over the past few seasons. There is talk that the Sixers may buy out his contract so that he may sign with a contender. If not, it remains to be seen what Granger’s role will be with Philly embarking on a youth movement. But as one of the few players capable of scoring, he’ll be worth tracking if he actually suits up in a Sixers’ uni.

Following the Andre Miller–Brian Shaw fiasco, the Nuggets needed point guard depth — especially after Ty Lawson suffered a fractured rib just prior to the All-Star break. There’s a cloud of uncertainty as to how long Lawson will be sidelined so Denver opted to acquire Brooks, who paid immediate dividends with 17 points off the bench Friday. While Lawson is hurt, Brooks can be somewhat valuable to Fantasy owner and will allow Randy Foye to shift back to his natural shooting guard spot. Hamilton, a former first round pick from the University of Texas, never met expectations in the Mile High City, but Rockets GM Daryl Morey loves reclamation projects, so keep an eye on how the athletic Hamilton fares in his new home.

Charlotte is determined to qualify for the postseason with Neal and Ridnour set to improve their backcourt depth and perimeter shooting. Both will serve as backups to starters Kemba Walker and Gerald Henderson and will only possess value in deep leagues. Sessions will serve in the same capacity with the Bucks behind Brandon Knight and the promising rookie Nate Wolters.

Glen Davis bought out and released by Orlando

While this wasn’t a trade, the move has Fantasy implications for several players on the Magic roster. If your league’s trade deadline hasn’t expired, make it a point to acquire Victor Oladipo. Releasing Davis allows Oladipo to get all the minutes and opportunity he needs to become the Rookie of the Year. He will be a Fantasy star for years to come as evidenced by his performance on Friday: 30 points, 14 assists, nine boards and two steals versus New York. Also benefiting from the departure of Big Baby is Tobias Harris (22 points and eight rebounds on Friday), who makes the move from small to power forward and should see increased rebounding and scoring.

Now it’s your turn. In the comments below, let us know your thoughts on the NBA trade deadline moves.

By Bob Raymond
This entry was posted on Saturday, February 22nd, 2014 at 4:28 pm and is filed under BASKETBALL, Bob Raymond, The Wire Troll, Trade Deadline, Transactional analysis. You can follow any responses to this entry through the RSS 2.0 feed. You can skip to the end and leave a response. Pinging is currently not allowed.