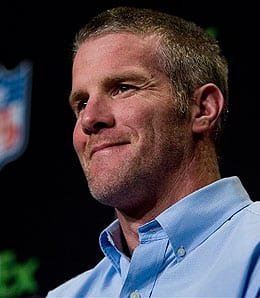 Think Brett Favre is a Fantasy stud as a Viking? Think again.

The 2009 RotoRob NFL Draft Kit rages on as today we look at key players who have changed uniforms this season and what the Fantasy impact of these moves will be.

Without further ado, let’s take a look at some of the names you need to know that are in different places in 2009.

Brett Favre, QB, Minnesota Vikings: I can’t explain how little Fantasy impact this has right out of the gate. Look at Favre as being in that Jake Delhomme/Chad Pennington/Jason Campbell range in the 20s. Why the low rating, you ask? Consider Favre’s final four games of the season versus those of now teammate Tarvaris Jackson.

I’m not suggesting that Jackson is a better quarterback than Favre. However, No. 4 is going to be 40 in October and is likely to wear down again towards season’s end as those numbers from last season might suggest. Does that sound like a headache you need throughout the season? He’s a Fantasy backup, period. Alright, too much Favre talk. I’m spent.

Jay Cutler, QB, Chicago Bears: Before one hops onto the Cutler Express, consider the following. Our conquering hero from Minnesota (Favre) led the NFL in interceptions last season. Second place in that dubious category belonged to Cutler with 18.

While his decision making isn’t the best, his biggest problem will be the lack of weapons. Devin Hester, Earl Bennett and Rashied Davis are just a few of his receiving options. Boldin, Fitzgerald and Breaston, they are not.

After Cutler threw for over 4,500 yards last season, expect that number to come down significantly thanks to him having fewer receiving options and having to play in one of the tougher weather sites in the NFL.

Michael Vick, QB, Philadelphia Eagles: Living in the land of green and silver, mass hysteria ensued upon the announcement of Vick’s signing during the Eagles-Patriots pre-season tilt. Andy Reid says that Vick is coming as a quarterback but that’s clearly a smokescreen for the hodgepodge of the Wildcat.

Does Vick have real Fantasy value? Not really. Trying to evaluate Fantasy value based off five to 10 plays he’s going to run is very difficult. If anything, he’s likely to drag guys down (i.e., Donovan McNabb and Brian Westbrook). In other words, he’s the Red Bull of Fantasy guys — supplying quick energy, but leaving you relatively empty after the sugar rush subsides. As far as his quarterback prospects, he might be worth a flier if you take McNabb. Otherwise, don’t even try it.

Derrick Ward, RB, Tampa Bay Buccaneers: A part of the Giants’ Earth, Wind & Fire backfield, Ward proved to be a capable back. After running for 1,025 yards in ’08, he moved onto Tampa, who could use a shot in the arm in the backfield.

Ward not only brings his well rounded running style, but with the injury history of the Tampa backfield, he’s likely to see action early and often. Consider him one of the true sleepers of 2009.

Tony Gonzalez, TE, Atlanta Falcons: Another year removed from the Alge Crumpler era, Atlanta decided to help out its passing game by acquiring the future Hall of Fame tight end from Kansas City. He was targeted 155 times last season, far and away the highest mark for a tight end. Roddy White and Michael Turner are the big guns in Atlanta offense, but don’t expect Gonzalez to be merely a showpiece. He is still likely one of the first three tight ends to go off the board.

Other key names to watch in the NFC:

T.J. Houshmandzadeh, WR, Seattle Seahawks: Here’s hoping Seattle finally has a receiver that doesn’t get injured. He should play well with a revitalized Matt Hasselbeck.

Brandon Jones, WR, San Francisco 49ers: As long as he stays out with a shoulder injury, the 49ers don’t have a lot of bargaining power with rookie receiver Michael Crabtree.

Kellen Winslow, TE, Tampa Bay Buccaneers: The change of scenery will not help unless the oft-injured Winslow stays healthy.

Kyle Orton, QB, Denver Broncos: As a part of the deal that sent Cutler to Chicago, Orton comes in for new head coach Josh McDaniels to lead a Denver offense that finished second in yards per game in 2008.

However, all of those Orton for Fantasy sleeper campaigns might want to hold off the enthusiasm. The new Bronco signal caller was certainly asleep last weekend in San Francisco when he fired three interceptions. Granted, it’s only preseason, but Orton’s accuracy was never confused with that of Troy Aikman at his zenith.

Since Denver could be in chase mode a great deal in ’09, Orton potentially has value as a spot starter. Tread carefully, though. His inconsistent play could land him on the bench and behind backup Chris Simms.

Certainly, that’s impressive considering that Drew Bledsoe and Tony Romo combined on Owens’ first year in Dallas. Another change in scenery and quarterbacks should give Owens the fresh start he needs, correct? Not necessarily. Owens will turn 36 in December and is steadily declining.

Since his first year in Dallas, the mercurial receiver has seen his reception total drop every year.
Age, along with weather and circumstances are more contributing factors as to why Owens is no longer a significant Fantasy threat. Another matter that will hinder him is quarterback. Regardless of what he thought of Jeff Garcia, Donovan McNabb and Romo personally, all three were competent Pro Bowl quarterbacks. I’m not sure Trent Edwards is quite ready for prime time. No longer an elite option, consider Owens as a number two receiver on Fantasy rosters.

Matt Cassel, QB, Kansas City Chiefs: Few players and coaches that have left New England turn out well. Cassel, who filled in admirably for the Patriots by guiding them to an 11-5 record, has only 15 career starts and just signed a big contract.

Examining the Chief roster, only Dwayne Bowe provides a significant pass-catching threat now that Gonzalez is in Atlanta. Cassel is still an up and coming quarterback who needs a lot more seasoning. He should be considered a back-up option on Fantasy rosters.

Other new faces to watch in the AFC:

Laveranues Coles, WR, Cincinnati Bengals: He will not produce numbers similar to the departed Houshmandzadeh, but will offer a good compliment to Chad OchoCinco.

Fred Taylor, RB, New England Patriots: I’m not sure how much gas he has left in the tank, but playing for New England should allow him to punch a few in the endzone.

L.J. Smith, TE, Baltimore Ravens: Smith underachieved in Philly, but may find the field thanks to the ailing tight end Todd Heap.

Torry Holt, WR, Jacksonville Jaguars: Without playing a down, he is already the third greatest receiver in Jaguar history.