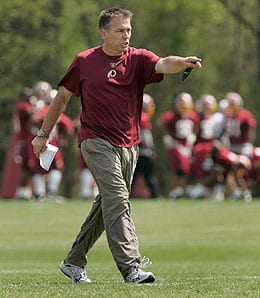 If the Redskins don’t show progress this season, fingers will be pointed at Jim Zorn.

The 2009 RotoRob NFL Draft Kit continues today with the final team preview. Next up, we’ve got customizable cheat sheets, rookies, sleepers and a column about new faces in new places. With images of Michael Vick crying in prison, let’s review the Washington Redskins, who will look to get back to playing winning football in 2009.

The Jim Zorn era got off to a fast start in 2008, with the team managing victories in six of its first eight games. The team was winning close games and Zorn was playing the part of riverboat gambler. With that 6-2 start came expectations that were never realized last year, but the team did have some bright spots. RB Clinton Portis continued on his path to Canton as he rushed for nearly 1,500 yards to go along with nine rushing touchdowns. Tight end Chris Cooley caught a ton of balls (83), but only managed to get in the end zone once. Wide out Santana Moss had a decent year with over 1,000 yards receiving and six scores. Outside of the three mentioned, the team had no other viable Fantasy starters. The defense was stellar, but did not create turnovers or score defensive touchdowns. Rookie defensive back Chris Horton was a giant bright spot for the ‘Skins as he anchored the strong safety position at close to a Pro Bowl level.

About halfway through the season, injuries and lack of depth on the offensive line finally caught up to the Redskins. The line was not providing adequate time for the offense to execute, which shortened the playbook and made the team plain, predictable, and ineffective. What started as such a promising season, ended in disappointment and no playoff berth. Overall, 8-8 was not too bad for a rookie head coach in a pressure-packed market, but considering the Redskins made the playoffs the season before, 2008 was a letdown.

The Redskins made arguably the biggest off-season splash when the signed stud defensive tackle Albert Haynesworth. He is known for causing havoc and severely disrupting what opposing offenses are trying to accomplish. The team also released aging veterans Jason Taylor, Marcus Washington and Shawn Springs, all of whom did not produce to expected levels last season.

I think it is well known in the Washington media that this is a make or break year for Coach Zorn. If the team does not show improvements (on the field and in the standings), owner Dan Snyder will make a coaching change next offseason.

Without a second- or fourth-round draft pick this year, the Redskins must have been happy when pass rushing specialist DE/LB Brian Orakpo fell to them at No. 12 overall. He will immediately see the field, most likely as a pass rushing linebacker. With their third-round pick, the Redskins selected Kevin Barnes, who hopes to prove himself as an NFL caliber cornerback during camp. The ‘Skins filled out the rest of their draft with two linebackers, a tight end, and a wide receiver who all will have little to no impact in the foreseeable future.

Jason Campbell is the clear cut starter in DC, but this could be his last year if he does not step up his game. He is a free agent after this season and the Redskins have made it clear that they are not sold on him as their long-term quarterback. Campbell is not a top 15 Fantasy quarterback and should not be relied upon as such. He may turn into a nice waiver wire pickup this year if he finally picks up his passing numbers. The back-up job is being battled out during camp, but it looks like the position belongs to sophomore Colt Brennan. He showed flashes last preseason and he looks forward to showing the team brass that he is the real deal.

If healthy, you can pencil in Portis for 1,300 yards and close to 10 scores, although Washington may try to reduce his workload in an attempt to keep him fresh throughout the season. If Portis goes down, backup Ladell Betts becomes an immediate Fantasy pickup, as he has shown in the past to be a reliable ball carrier who can make some plays.

Going into the season, the wide receiving corps is one of the huge question marks on the team. Second-year guys Malcolm Kelly and Devin Thomas need to justify their second round billing by stepping into the role of No. 2-type receivers to take some pressure off the oft double teamed Moss. I like Thomas as a sleeper this year, especially because of his leaping ability potentially transforming into touchdown-producing situations. Antwaan Randle El should return to being a slot/third wide out because he is not talented enough or big enough to be a secondary wide receiver lining up outside.

Everyone knows who Cooley is by now, but watch out for TE2 Fred Davis. He is a second-year guy out of USC who won the Mackey Award as the best tight end in college. He is super athletic and has decent hands. Davis was a bit of a knucklehead last season, but he seems to be more focused and ready to produce this year. Cooley is still a great Fantasy option, but Davis may start stealing some of his catches.

The Redskin defensive unit has the potential to be great this year, but in the past they have lacked the big game-changing plays that translate into Fantasy points. Possibly, with the addition of Haynesworth and the re-signing of DeAngelo Hall, more big plays will come this season. I would take a shot at the ‘Skins this year as my Fantasy defense as they should be cheap and reliable.

By Alex Hardin
Tags: Washington Redskins
This entry was posted on Monday, August 17th, 2009 at 8:35 am and is filed under 2009 RotoRob NFL Draft Kit, Alex Hardin, FOOTBALL, Team report. You can follow any responses to this entry through the RSS 2.0 feed. Both comments and pings are currently closed.