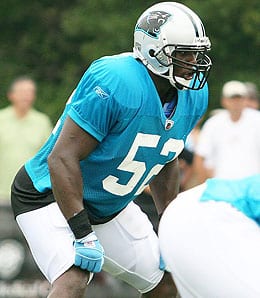 No one had more tackles in the NFL last season than Jon Beason.

And the 2009 RotoRob NFL Draft Kit rages on with yet another team preview (there’s just one more team to go). We’re going to try to shoot out all these team previews and then start releasing the kit’s other goodies (cheat sheets, sleepers/busts lists, etc.). While we wonder if the Carolina Panthers can take the next step and actually parlay their regular season success into some post-season wins, it’s definitely starting to appear that Ben Roethlisberger is going to be vindicated in the sexual assault case against him.

Carolina finished atop the NFC South division with a stellar record of 12-4, including a perfect 8-0 mark at home. The Panthers brandish one of the NFL’s most potent rushing attacks, and their 2008 per-game average of 152.3 yards was good for third in the league. Tailback DeAngelo Williams led the way with 1,515 rushing yards and a league-best 20 total touchdowns. After serving a two-game suspension to open the season, wideout Steve Smith topped all NFL receivers by averaging 101.5 receiving yards per game over his last 14 contests. On the defensive side of the ball, middle linebacker Jon Beason led the league with 110 solo tackles, while defensive end Julius Peppers racked up a fifth-best total of 14.5 sacks.

Remember that perfect home record Carolina posted during the regular season? It – and the Panthers’ Super Bowl aspirations – came crashing to earth on January 10, when Carolina suffered a 33-13 thrashing at the hands (beaks?) of the Arizona Cardinals in the NFC Divisional playoffs. Panther quarterback Jake Delhomme committed six turnovers in the nightmarish loss, leaving many to wonder whether he has the right stuff to take his team all the way to pay dirt. The Panther passing game finished a rather lackluster 19th in the league last year, while Delhomme’s 15 TD passes was only 17th-best among NFL signal callers.

The Panthers largely played a pat hand in the offseason, with the team returning 21 of its 22 starters from the ’08 squad. Peppers signed a lucrative franchise tender, and all those Benjamins just might help him to play in Happy Mode this season – whilst eating up a huge chunk of Carolina’s salary cap allotment.

The Panthers did not have a No. 1 draft pick this season, but when defensive end Everette Brown fell to the second round, the Cats were quick to pounce. Brown is an athletic (if a bit smallish) pass rushing specialist who could give Carolina an impressive bookend for Peppers this season. Sixteen picks later, the Panthers nabbed Sherrod Martin, a safety with solid cover skills who should boost the team’s nickel and dime packages almost immediately.

Delhomme once again didn’t come close to achieving the kind of numbers he did back in the ’04 and ’05 seasons, but at least the nine-year veteran played all 16 games for the first time since 2006. Game number 17 was a killer, though, as he tossed five interceptions in the Panthers’ crushing loss to Arizona. While he’s not as bad as that game made him appear, Delhomme is not an elite passer by any means – and with the Panthers boasting one of the league’s best rushing attacks, it would seem highly unlikely that Delhomme will surpass 3,500 yards or 20 touchdowns in 2009. Those numbers relegate him to a Fantasy backup in most formats, and that’s exactly how you should treat him on draft day.

It’s hard to believe now, but Williams didn’t score his first touchdown nor garner a 100-yard rushing game until Week Five of last season. D-Will exploded in the second half, though, averaging 124 rushing yards and scoring 15 touchdowns over his last eight games. While it’s tempting to think of him as the top back in Fantasy, remember that he’ll almost certainly share carries with Jonathan Stewart again in 2009 – and he’s not much of a receiver out of the backfield. Nonetheless, Williams is still a great pick in the middle-to-latter part of the first round.

And what of Stewart – who ran for 836 yards and scored 10 times in ’08? He is currently nursing a gimpy Achilles’ tendon, but that injury only figures to limit him in practice for the short term. Stewart should find a place in every Fantasy league this season, mainly as a third back or flex option. Needless to say, if you draft Williams, Stewart is an indispensable handcuff pick later on.

Smith is Delhomme’s top target; you know it, I know it, and every defensive back in the land knows it. Whenever Smith steps on the field, he draws more attention than Kim Kardashian at a frat house kegger – but the diminutive wideout still finds a way to rack up the yardage. Smith has never been an elite red-zone option, and that fact alone keeps him from being a top five Fantasy wideout. Look for Smith towards the end of Round Two in most Fantasy drafts.

Lanky Muhsin Muhammad lines up opposite Smith, and Mooshie quietly posted some serviceable numbers last season: 923 receiving yards and five touchdowns. He is 36 years old, however, and the time may have come for Dwayne Jarrett to stake his claim to a starting spot in the Carolina lineup. Whoever wins the job is probably worth a late round look as your third or fourth Fantasy wideout, but don’t expect more than a few spot starts during the course of the season.

Yes, Virginia, the Panthers do have a tight end…but he’s often disguised as an extra tackle. Carolina does not employ its tight end a great deal in the passing game, so it set the Fantasy world on its collective ear when Dante Rosario snagged seven receptions for 96 yards and a touch in Week One last season. Rosario slumped just a bit thereafter, managing just 11 catches for 113 yards the rest of the way. Jeff King nabbed 46 receptions in 2007, but slipped to just 21-195-1 last season. Rosario has some upside, but he’s no more than a speculative pick in deeper leagues at this point.

The Panthers’ once-fearsome defense was only serviceable last season, finishing in the middle of the pack in most defensive categories. A big worry heading into the 2009 campaign is the loss of run-stuffing nose tackle Ma’ake Kemoeatu, who will miss the season due to a torn Achilles’ tendon. Carolina was only 20th against the run last year, and the loss of Kemoeatu may make the Panthers easy pickings for a ground-pounding offense. They only 16th against the pass last year, so plenty of high-scoring games could be in the offing for the ’09 season. Expect the Carolina defense to go undrafted in most Fantasy leagues this season – though middle ‘backer Beason is an IDP beast.

Kick returner Mark Jones was lost to free agency, and Ryne Robinson is the front-runner to handle kickoff return duties this season. Whether Robinson or a newcomer wins the position, remember that the Panthers are typically one of the league’s worst kick return units, so don’t set your bar too high.

Place kicker John Kasay went undrafted in most Fantasy leagues last year, then proceeded to cobble together his best season in over a decade. He could definitely do it again, but there is also a risk that he’ll revert to the same form that produced only three triple-digit scoring seasons in his previous nine campaigns. Proceed with caution, and know that Kasay’s Week 16 (AKA Fantasy Championship Week) game is against the New York Giants at the Meadowlands (and the Evil Wind that oft swirls therein).

By Buck Davidson
Tags: 2009 NFL Draft Kit
This entry was posted on Saturday, August 8th, 2009 at 10:06 am and is filed under 2009 RotoRob NFL Draft Kit, Buck Davidson, FOOTBALL, Team report. You can follow any responses to this entry through the RSS 2.0 feed. Both comments and pings are currently closed.