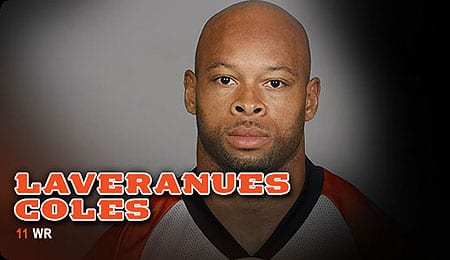 Now that we’re done all the team previews, the 2009 RotoRob NFL Draft Kit will switch gears and get into the meat of the kit. Today, Buck provides his sleeper picks for the upcoming season.

Carson Palmer, Cincinnati Bengals: Before an arm injury limited him to just four games last season, Palmer had tossed at least 26 touchdown passes in four straight seasons. His wing looks fine, but a minor high ankle sprain might slow him down a bit in the preseason. Nonetheless, Palmer could be primed for a fine comeback in 2009. Although top target T.J. Houshmandzadeh is no longer in town, former Jets’ regular Laveranues Coles is a dependable receiver who can make the tough catch in traffic, while former police blotter regular Chris Henry looks as if he has cleaned up his act and could become a solid red-zone target again. Chad Ochocinco is still around, and hopefully he’ll contribute more than the patetico 540 yards and four touchdowns he managed in ’08. At this point, Palmer makes a great “1/1a” quarterback in a “play the matchups” kind of Fantasy strategy, but if things fall into place he could become your every-week starter by season’s end.

Trent Edwards, Buffalo Bills: Edwards started the 2008 season like a house afire…and ended up just like that burning house: a smoking pile of embers. Through the first half of the season, though, Edwards averaged 216 yards passing per game, with a completion percentage of 68…but he only managed six touchdown tosses. The lack of a reliable red zone target undoubtedly contributed to Edwards’ second-half collapse – but that has all changed now that Terrell Owens is in town. T.O. should team with incumbent wideout Lee Evans (63-1,017-3 last year) to give Buffalo one of the league’s better receiving tandems, and Evans should benefit from the double teams his eminent teammate will undoubtedly draw. Don’t count on Edwards as your Fantasy starter just yet, but he’s a great backup – with the upside to post starter’s numbers this season.

Ray Rice, Baltimore Ravens: The Raven backfield situation is a bit murky, but with injury-risk Willis McGahee looking to be on the downside of his career, the time may be now for Rice to become a Fantasy staple. The second-year back had a rather bland rookie season, but he did display good receiving skills out of the backfield. Rice has been taking a lot of snaps with the first team in practice, so he figures to see plenty of touches in the early going. A caveat with Rice – and for that matter McGahee – is that fullback LeRon McClain has shown that he is a very capable fill-in tailback, rushing for 902 yards and 10 touchdowns last year. While Rice may lose some goal-line opportunities to the 260-pound McClain, he should garner enough touches to be Fantasy-relevant from the get-go – especially in PPR leagues – and he could be a solid starter if McGahee again goes down with an injury.

Cedric Benson, Cincinnati Bengals: At the beginning of last season, Benson looked to be on his way out of professional football – another casualty of the woeful 2005 NFL Draft class, which had more busts than…on second thought, let’s just leave that one on the table, okay? Not so fast, though. When the Bengals’ need was dire, Benson stepped in and looked a bit like his old self – his old University of Texas self, that is – averaging 76 rushing yards per game over the second half of the season. This year, he looks like a man on a mission; he’s in shape and going full-bore at practice. He doesn’t face much competition for reps in the Bengal backfield, so Benson could be a major Fantasy contributor early in the season. His line is suspect, and his quarterback is recovering from a serious arm injury, but Benson has the opportunity to put up some nice numbers in 2009 – especially when the match up is right. Draft him as a flex or No. 3 running back for now, but don’t be surprised if Benson finds his way into your Fantasy lineup sooner rather than later.

Ronald Curry, St. Louis Rams: The Rams will be without No. 1 wideout (and ubiquitous Fantasy sleeper) Donnie Avery for the first two regular season games after he suffered a stress fracture in his left foot during a scrimmage. Enter Curry – who is by far the most experienced and accomplished of the remaining Ram wideouts. You’ve heard of the “Who’s Who” list; the Rams’ corps of wideouts is more of a “Who?” list. Curry posted a decent 55-717-4 line for the woeful Raiders back in 2007, and the eighth-year vet stands to become the No. 1 aerial target in St. Louis come Week One. If Curry is able to spice up the lackluster Ram passing attack, he could be a bona fide No. 3 Fantasy wideout even after Avery returns. If you grab Avery in your draft (and he may be a nice value pick at this point) be prepared to snag Curry later on…then keep whichever of them becomes The Man in St. Loo.

Limas Sweed, Pittsburgh Steelers: The Steelers are searching for a deep threat to replace the departed Nate Washington, and Sweed looks like he could be that guy – and more. The 6’4″ Sweed isn’t the greatest of route runners, but his size and speed create all kinds of match-up problems for opposing secondaries. He hauled in a 45-yard reception in the Steelers’ first pre-season game, and more should be in store as the big kid adjusts to regular playing time. There are some downsides to Sweed: he has yet to win Ben Roethlisberger’s trust in the red zone (or any zone for that matter) and his sub par blocking may limit his playing time. If your league rewards long distance touchdowns, though, Sweed is well worth a late-round look as a reserve wideout – with the upside to become a starter if either Hines Ward or Santonio Holmes succumbs to injury.

Chaz Schilens, Oakland Raiders: With top draft pick Darius Heyward-Bey battling hamstring problems early in camp, Schilens has emerged as Oakland’s top wideout – and he may just keep that distinction after DHB returns. Schilens has the kind of size (6’4″, 225) that could make him an inviting red zone target for quarterback JaMarcus Russell – especially if defenses are draped all over Russell’s favourite 2008 target, tight end Zach Miller. As your draft winds down, consider taking a flier on Schilens, and if he winds up on the waiver wire be prepared to grab him if he has a breakout game.

Josh Morgan, San Francisco 49ers: Every day that San Francisco’s top draft pick Michael Crabtree resides on the nation’s unemployment roll, Morgan’s stock drifts higher and higher. The second-year wideout scored three times on his 20 receptions a season ago and averaged a respectable 16 yards per catch. The current No. 1 wideout in San Fran is Isaac Bruce, but he’ll turn 37 this season, and is clearly nearing the end of his fine career. The opportunity is there for the athletic Morgan to stake his claim as the 49ers’ wideout of the future, and even if that doesn’t happen, he should still see plenty of looks even after Crabtree finally inks a deal and makes it onto the field. Crabtree’s holdout looks like it could be a long one, so bump Morgan up your sleeper board a few notches, as he could easily lead ‘Niner wideouts in yardage and/or touchdowns this season. Don’t look for week-in-week-out consistency from Morgan, but his big-play potential (and Crabtree’s holdout) makes him worth drafting as your No. 4 Fantasy wideout.

Brent Celek, Philadelphia Eagles: The departure of L.J. Smith (37-298-3 in 13 games last season) opens the door for Celek, who was very impressive in last year’s playoffs – snagging 19 receptions for 151 yards and three touchdowns. The 24-year-old Celek has been very sharp in camp, and the Eagles have made it quite clear that he’ll play a large role in their offense this season. Don’t worry about Celek’s pedestrian 27-318-1 line of a year ago: He is a talented receiver who has the ability to get down the field, and to make something good happen after he gets the ball. If he wins Donovan McNabb’s red-zone trust early on, Celek could post numbers worthy of Fantasy starter status in 2009.

Jermaine Phillips, Tampa Bay Buccaneers: The Bucs plan to move Phillips to Derrick Brooks’ old digs at weak side linebacker, and if the former safety can make the transition, his tackle numbers should skyrocket in 2009. Brooks – who was a Tampa Bay icon before his release – amassed more than 100 total tackles in 12 straight seasons, while intercepting 24 passes, recording 12.5 sacks and scoring seven touchdowns over that period. While Phillips probably won’t achieve those totals, he is a solid defender who racked up 109 tackles of his own back in 2006. Phillips is injury-prone, but his move to the Will ‘backer spot (and rare DB/LB position eligibility) makes him a risk worth taking as you fill out your Fantasy roster.

By Buck Davidson
This entry was posted on Tuesday, August 18th, 2009 at 9:25 am and is filed under 2009 RotoRob NFL Draft Kit, Buck Davidson, FOOTBALL, Sleepers. You can follow any responses to this entry through the RSS 2.0 feed. You can skip to the end and leave a response. Pinging is currently not allowed.