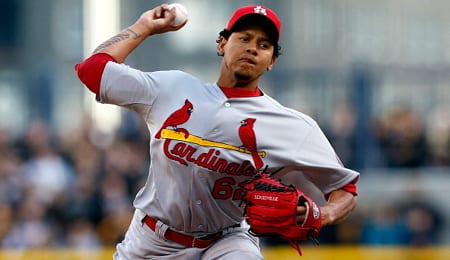 Carlos Martinez will get another crack at the rotation for the Cards. (mlbpark.donga.com)

Timing is everything, isn’t it? Last week we sang the virtues of Mookie Betts, and lo and behold the BoSox finally made a move to shore up that outfield by calling him up Saturday. The old Magic-8 Ball was in fine form. Betts is now owned in 40 per cent of CBS leagues and if you want a shot at owning his superb on-base skills and speed, a substantial FAAB bid should be in the cards this weekend.

Taijuan Walker is finally making his 2014 debut Monday against the Astros followed by a weekend date with the ChiSox. He’s owned in 80 per cent of CBS leagues so the odds of his availability are rather slight, but it’s still worth a quick look. Walker is coming off a very strong final tuneup at Triple-A Tacoma in which he twirled a complete game four-hit shutout with nine strikeouts. Hopefully that shoulder injury that has kept him on the sidelines for all of 2014 is now water under the bridge.

Without further ado, let’s give the remainder of this week’s Troll options the once over.

C.J. Cron, 1B, Los Angeles Angels (CBS: 44 per cent owned, ESPN: 11 per cent): Cron is a young player that we mentioned earlier in the season. Since then, Raul Ibanez was given his walking papers and Cron owns the DH gig outright in Anaheim. Cron has responded in fine form, going 10-for-25 with five homers and seven RBI in his past seven starts.

Wilson Ramos, C, Washington Nationals (CBS: 47 per cent owned, ESPN: 31 per cent): At the beginning of May we mentioned that Ramos was heading out on a rehab assignment and should be ready to return to action any day. He made it back for all of a month before returning to the DL with a hamstring injury. Ramos is now active (again) and hopefully ready to flash the power that resulted in 16 homers in 287 at-bats in 2013.

Carlos Martinez, RP/SP, St. Louis Cardinals (CBS: 39 per cent owned, ESPN: 5 per cent): Injuries to both Michael Wacha and Jaime Garcia have forced the Cards hand and the process of converting Martinez from a reliever back into a starter is now well underway. He’s only 22 and posted sub-3.00 ERAs in his last two seasons down on the farm as a starter, so going back into the rotation shouldn’t be a problem, although he was struggling in the pen last month and there have always been concerns about his durability in the rotation. Grabbing Martinez now could generate solid second half rewards. Just don’t count on him hitting it past the pitcher (see video below).

Brad Miller, Seattle Mariners (CBS: 48 per cent owned, ESPN: 13 per cent owned): After a horrible first two months when he failed to break the Mendoza Line we’ve seen a resurgence from Miller in June. He’s slugged four homers with 11 RBI and scored 14 runs this month and has finally started to look like the player we thought we were drafting in March.

Travis d’Arnaud, C, New York Mets (CBS: 32 per cent owned, ESPN: 1 per cent): Since returning from his demotion to Las Vegas, d’Arnaud has six hits, including a dinger, in four games. The two-week stint in Sin City appears to have done him a world of good.

Zach Putnam, RP, Chicago White Sox (CBS: 4 per cent owned, ESPN: unowned): Manager Robin Ventura finally tired of watching Ronald Belisario struggle in the ninth and removed him from the closer role. Chicago has gone to a closer-by-committee for now and Putnam, Jake Petricka, Javy Guerra and Daniel Webb are all in the mix for saves. A conservative FAAB bid on any member of this group could yield solid returns.

Raisel Iglesias, SP, Cincinnati Reds (CBS: unowned, ESPN: not available): Last week, Iglesias signed a seven-year deal for a reported $30 million with Cincy. He was a reliever in Cuba, but the Reds have already announced that they will be working towards converting him into a starter. Iglesias is at least a year or two away, but Dynasty league owners could find it worth the wait.

Ken Giles, RP, Philadelphia Phillies (CBS: 3 per cent owned, ESPN: unowned): The heir apparent to closer Jonathan Papelbon has been getting it done in the City of Brotherly Love. In seven innings since being called up he’s allowed only two hits, three walks and one earned run while fanning 12. In the event that the struggling Phillies look to move payroll (highly likely) and find a taker for Papelbon, a more prominent role in that bullpen could be in order for Giles.

Chris Young, SP, Seattle Mariners (CBS: 24 per cent owned, ESPN: 5 per cent): Young has allowed only two earned runs in his past three starts, winning twices. When you’ve amassed a 3.15 ERA, 1.16 WHIP and seven wins so far and are owned in less than a quarter of the leagues at both CBS and ESPN you’re deserving of a bit more respect.

Jake McGee, RP, Tampa Bay Rays (CBS: 25 per cent owned, ESPN: 10 per cent): It’s a bullpen-by-committee in Tampa Bay but McGee has now garnered three saves in June, the last two coming on Friday and Saturday. It looks like he’s currently the go-to guy, but even if he returns to a setup role down the road, he’s still valuable with that microscopic 1.27 ERA and 42 punchouts in 35 2/3 IP.

Odrisamer Despaigne, SP, San Diego Padres (CBS: 10 per cent owned, ESPN: 1 per cent): Despaigne had mixed results at Triple-A with 41 strikeouts in 31 1/3 IP, but 18 free passes which helped contributed to 21 earned runs. So what does he do in his MLB debut last week against the Giants? Seven shutout innings of four-hit ball with no walks against just one strikeout. Caution is warranted, but you have to like the early results.

Carlos Pena, 1B, Texas Rangers (CBS: 1 per cent owned, ESPN: unowned): The loss of both Prince Fielder and Mitch Moreland for the rest of the season has forced the Rangers into giving Pena a shot. Desperate times require desperate measures. Pena is best left for those playing in AL-only leagues.

Marco Gonzales, SP, St. Louis Cardinals (CBS: 15 per cent owned, ESPN: unowned): A Cards starter, even a youngster with a rather short resume, is worth a shot in a two-start week. If you’re looking to stream starters this week, Gonzales is near the top of our list.

Crave more in-depth Fantasy analysis? Then join us every Thursday at 9 p.m. EST for RotoRob Fantasy Baseball Weekly Podcast on Blogtalkradio as we entertain and edify you for an hour or more each week. This week, RotoRob will be joined by RotoRob.com MLB/NFL Writer Michael Seff. Tune in here.

By Tim McLeod
This entry was posted on Sunday, June 29th, 2014 at 2:43 pm and is filed under BASEBALL, The Wire Troll, Tim McLeod. You can follow any responses to this entry through the RSS 2.0 feed. Both comments and pings are currently closed.