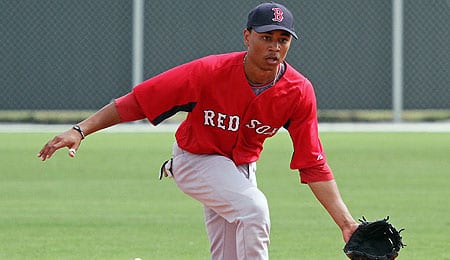 The BoSox may soon turn to Mookie Betts. (Monstah-mash.com)

Last week, the Marlins finally made the move many have been anticipating, promoting Andrew Heaney. The young southpaw accounted himself very well in his debut going six innings, allowing four hits, one earned run and one walk, while fanning three in a losing cause. Miami is going to have a great one-two left-righty combo when Jose Fernandez returns from Tommy John surgery. Earlier this month, we mentioned Heaney as a target and hopefully you bought in early as he’s owned in 80 per cent of CBS leagues so that window of opportunity is pretty much closed.

Without further ado, let’s give this week’s picks the once over.

Mookie Betts, 2B, Boston Red Sox (CBS: 14 per cent owned, ESPN: NA): If you give the Red Sox outfield a quick review it becomes very apparent that there are some serious holes that need to be filled. Grady Sizemore was recently released. Shane Victorino can’t stay healthy and Mike Carp is out. That leaves Daniel Nava, Jonny Gomes, Jackie Bradley Jr., and Brock Holt to hold down the fort and this collection of players simply isn’t getting it done. The defending World Series champs are in trouble and need a boost from their outfield production. Could Betts provide that spark? They’ve moved him from the middle infield to the outfield and with his recent promotion to Triple-A he hasn’t skipped a beat. In the past 10 games at Pawtucket, Betts is getting on-base at a .422 clip (see video below) with five stolen bases. Buying in now could save you a pile of FAAB cash as his eventual promotion could be right around the corner.

Scooter Gennett, 2B, Milwaukee Brewers (CBS: 41 per cent owned, ESPN: 19 per cent): The Scooter just keeps rolling right along. He’s on the strong side of the platoon for the Brew Crew and is red hot this month with 16 runs in 62 at-bats and an outstanding .463 OBP. Learn to live with the days off as when Gennett does play he’ll make it more than worth your while to have him active.

Jake Odorizzi, SP, Tampa Bay Rays (CBS: 44 per cent owned, ESPN: 5 per cent): In a season filled with inconsistency, Odorizzi has now strung together three great starts in a row. In his last outing against the Astros he tossed 7 1/3 IP shutout innings, allowing only one hit with 10 strikeouts. He simply reeks of success right now.

J.D. Martinez, OF, Detroit Tigers (CBS: 25 per cent owned, ESPN: 16 per cent): We absolutely loved Martinez several years back when he was coming up through the Astros system and had high hopes that simply didn’t pan out. Given a second shot by the Tigers, he’s been delivering — in a big way. Last week, Martinez absolutely pounded the ball going 12-for-27 with four bombs and 10 RBI. He is certain to be one of the most highly sought after players on the week this weekend

Craig Gentry, OF, Oakland Athletics (CBS: 6 per cent owned, ESPN: unowned): We mentioned Gentry on April 20 and at the time he was owned in only three per cent of CBS leagues. Since then, he’s added another nine stolen bases in May and June and still isn’t getting nearly the love he deserves. If you have the potential to gain points in the stolen base category, a cheap FAAB bid and some patience could prove to be very rewarding.

Yohan Pino, SP, Minnesota Twins (CBS: 3 per cent owned, ESPN: 1 per cent): The career minor leaguer started turning things around last year, and hasn’t looked back. He was off to an absolutely blistering pace this year at Triple-A Rochester, sporting a 9-1 won-loss record, and ERA of 1.92 and a strikeout per inning. The 30-year-old won his debut last week against the White Sox, tossing seven strong innings while allowing two earned runs and fanning seven.

Brandon Guyer, OF, Tampa Bay Rays (CBS: 1 per cent owned, ESPN: unowned): The Rays activated Guyer from the DL and he should be looking at a steady diet of at-bats with David DeJesus (hand) on the DL. As recently as 2013 at Triple-A Durham, Guyer hit seven homers and swiped 22 bags in 356 at-bats. In deeper formats, there is some sneaky potential waiting here.

Derek Dietrich, 2B, Miami Marlins (CBS: 7 per cent owned, ESPN: unowned): Rafael Furcal managed to stay healthy for a full nine games before returning to the DL with a left hamstring strain. Go figure. We only expected him to last six games. The Marlins have recalled Dietrich, who earlier this year hit five homers in 130 at-bats for the Fish. NL-only league owners should be paying attention.

Joe Panik, 2B, San Francisco Giants (CBS: 2 per cent owned, ESPN: unowned): It’s time for a Panik attack in San Francisco. He’ll bring a sprinkling of both power and speed to the table, but his principle value will be those stellar on-base skills. If the Giants give him an opportunity at the top of the lineup, Panik has the potential to be a huge asset in the runs scored category.

Steve Pearce, 1B/OF, Baltimore Orioles (CBS: 3 per cent owned, ESPN: 1 per cent): Pearce is on a tear with eight hits, including two dingers, in his last four games. Get him rostered and active while he’s hot.

Jarred Cosart, SP, Houston Astros (CBS: 28 per cent owned, ESPN: 3 per cent): Cosart is now up to seven wins and has tossed six consecutive quality starts. The key to his recent success has been his ability to limit walks, allowing only 11 over this stretch. In deeper leagues Cosart is a solid option as a No. 5 or 6 starter.

Now it’s your turn. Let us know in the comments below who your favourite Fantasy baseball waiver wire picks of the week is.

By Tim McLeod
Tags: Miami Marlins
This entry was posted on Sunday, June 22nd, 2014 at 12:44 pm and is filed under BASEBALL, The Wire Troll, Tim McLeod. You can follow any responses to this entry through the RSS 2.0 feed. Both comments and pings are currently closed.