The Wire Troll: Morgan Frost Could Step Up 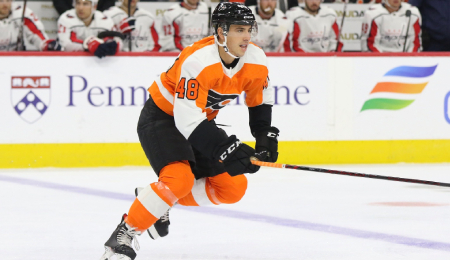 This will be Morgan Frost’s best chance yet to break out. (Amy C Irvin)

Welcome back to another season of Fantasy hockey! By now you probably know the drill: we only recommend players that are likely available to you (maximum ownership of 50 per cent in both ESPN and CBS leagues).

This week, Dallas finally penned RFA Jason Robertson to a new deal; the Isles locked up star forward Mathew Barzal for the next eight years; and Ottawa took a major hit, losing No. 1 goalie Cam Talbot to an UBI for the next several weeks (see below for a Fantasy opportunity this presents).

And now, let’s get to this week’s very goalie-heavy batch of…

Morgan Frost, C, Philadelphia Flyers (ESPN: 0.4 per cent; CBS: 7 per cent): Frost has clearly been more comfortable this training camp compared to previous seasons, and he has a tremendous opportunity to establish himself with No. 1 centre Sean Couturier (back) out week-to-week. How Frost works out under new coach John Tortorella is a topic we explored on a Podcast in mid-June, but the preseason results have been promising. Frost played in a career-high 55 games last season and is poised to become a lineup fixture with much more ice time, but we’ll really need to see him become a more consistent scoring threat. He’s stood out in exhibition play and was a major scorer in junior before the Flyers traded up to grab him in the first round in 2017 (see video below), so jumping on him early offers a great chance to pay major dividends this season.

Anton Forsberg, G, Ottawa Senators (ESPN: 18 per cent; CBS: 47 per cent): Talbot’s injury opens the door for Forsberg to get extended time as the starter for the Sens. Forsberg has not been particularly sharp this preseason, but he’s coming off his finest campaign as Ottawa’s primary starter last season, recording 7.02 goals saved above average. The last time he took over because of injury we weren’t very bullish, but this time he deserves your attention.

James Reimer, G, San Jose Sharks (ESPN: 11.8 per cent; CBS: 34 per cent): It’s been over three years since we last recommended Reimer, and that worked out well as he finished that season strong and has been even better since. No, he wasn’t stellar in the season debut Friday, but he’s coming off a fairly solid season in which he recorded a .911 save percentage with one shutout through 48 games (46 starts) and he’s projected to get No. 1 PT again. Reimer has recorded a .909 save percentage over the last five seasons combined, so you can do worse with your Fantasy goalie.

Jake Allen, G, Montreal Canadiens (ESPN: 3.7 per cent; CBS: 34 per cent): Allen was a tough goalie to figure out last season, and things didn’t improve down the stretch. But he’s armed with a new two-year deal and is the No. 1 man in the Montreal crease, so if you need another goalie option that’s going to play, here he is. Hey, if nothing else, Allen is doing good things for the community.

Aleksi Heponiemi, C, Florida Panthers (ESPN: unowned; CBS: NA): Heponiemi is not a big guy, but is driven, and that’s going to stead well him as he develops into a scorer, and — more likely — a real playmaker. Having caught the eyes of the coaching staff, earned a bigger role and even landed some PP time, it seems like he’s on the cusp on breaking through as a full-time player this season after playing in just a half dozen games and failing to score in 2021-22. Sleeper alert.

Marco Rossi, C, Minnesota Wild (ESPN: 48.8 per cent; CBS: 40 per cent): Rossi is another youngster that’s been seeing PP2 time in exhibition play, suggesting that a bigger role is in the offing for him this season. One of the team’s top prospects, he’s proving to management that he deserves to be in the NHL after seeing some solid PT in his cup of coffee last season. Rossi has upside as a top six player, so consider him another serious sleeper heading into the season.

Juraj Slafkovsky, LW, Montreal Canadiens (ESPN: 13.4 per cent; CBS: 50 per cent): Slafkovsky may have been a bit of a surprise as the No. 1 pick in the draft, but we doubt he would have fallen any lower than second overall. He is that good — especially as a dynasty option — and this is likely your last chance to grab him off the wire in a redraft league. There’s an argument to be made that Slakovsky could benefit from starting the season back in the CHL, and given his less than inspiring preseason, this may very well happen. But don’t kid yourself: he’s going to be a factor this season and is worth stashing as a result.

Mario Ferraro, D, San Jose Sharks (ESPN: 8 per cent; CBS: 7 per cent): Ferraro caught our eye early on last season, although his offense seemed to really fade after we picked him. Sorry, Mario. Still, he took on much more responsibility last season (playing top pairing minutes) and is now one of the team’s most important penalty killers. Judging by the 24:15 Ferraro played in the season opener, he’s in line for an even bigger role this season, making him a real asset in formats that reward TOI.

Bassist Graham Simpson co-formed Roxy Music, but he didn’t last long in the band. He was gone by the time “Grey Lagoons” came out on the band’s second album For Your Pleasure (1973). Here’s that track from a Top of the Pops clip.

By RotoRob
This entry was posted on Saturday, October 8th, 2022 at 12:14 pm and is filed under HOCKEY, RotoRob, The Wire Troll. You can follow any responses to this entry through the RSS 2.0 feed. Both comments and pings are currently closed.