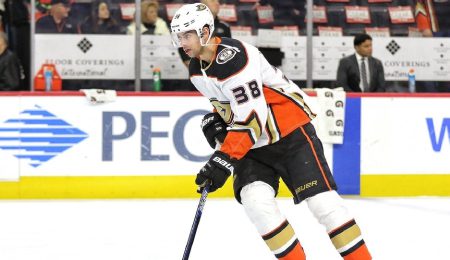 Derek Grant has a chance to produce for the Ducks. (Amy Irvin/The Hockey Writers)

Welcome back to another week of Fantasy hockey. We’re just about to wrap up November, putting us around the season’s one-quarter mark. We’ve got some injury replacement and category-specific waiver wire options for your consideration this week.

This week, the Lighting lost Brayden Point for the next 4-to-6 weeks (see below for a replacement option); Max Comtois will be out for six weeks after hand surgery; and Boston is starting to roll, winning four of five and three straight on the road.

Derek Grant, LW, Anaheim Ducks (ESPN: unowned; CBS: unowned): When the Ducks brought Grant back into the raft, we didn’t think much of the deal, and sure enough his production last season was modest (46-6-9-15). This season he again has been quiet, but with Comtois out, Grant has been elevated to the top line, and paid immediate dividends with a goal on three shots and a +1 showing on Friday. Sure, he’s normally quite easy to ignore as a bottom six player, but as long he’s seeing top line action, he’s worth considering. Believe it or not, Grant has actually recorded a 51.35 SCF percentage this season, but he’s ever so slightly losing the high danger chances battle. At this stage, he pretty much is what he is: a good-sized, defensively sound pivot with limited offensive ability who is willing to drop the gloves from time to time (see video below). But if you can squeeze a bit more out of Grant for now, go for it! That’s how you win Fantasy titles.

Boris Katchouk, LW, Tampa Bay Lightning (ESPN: unowned; CBS: 8 per cent): Need help in hits? Katchouk can provide some assistance in this department, piling up four on Friday, giving him 25 in the last seven games alone. Over this same stretch, the rookie has pitched in with three helpers, and has 10 PMs so far this season, so could deliver a boost in this area as well.

Ross Colton, C, Tampa Bay Lightning (ESPN: 0.7 per cent; CBS: 3 per cent): Colton had a promising rookie effort last season, potting nine goals in 30 games, but has been mostly quiet this season. Things may be changing, however, as he’s been bumped up to the 3C role with Point out. Colton responded with a rebound goal (his second of the season) on two shots and a +1 rating on Friday. He’s starting to get more rubber on net, and is definitely helping in hits, so we expect the production to start improving soon.

Mario Ferraro, D, San Jose Sharks (ESPN: 47.6 per cent; CBS: 18 per cent): Ferraro took a nice step forward last season, but looks even more improved in 2021-22, already reaching double digits in points while logging nearly 25 minutes per game. Better yet, he’s far and away the NHL leader in blocked shots with 60. Oh, and he’s remained fully healthy this season, so that’s been a big plus too.

Nick Jensen, D, Washington Capitals (ESPN: 5.6 per cent; CBS: 25 per cent): Jensen has never seen the same amount of action since getting dealt to Washington in 2019, but the Caps are going to lean on him a little more heavily with Justin Schultz currently hurting. Jensen has logged over 22 minutes in each of the last two games, picking up an assist on Nic Dowd‘s goal to open the scoring on Wednesday. If your league still rewards +/-, give Jensen a major boost; he’s second in the NHL in this department.

Joseph Woll, G, Toronto Maple Leafs (ESPN: 1.1 per cent; CBS: 3 per cent): Woll was brilliant again on Friday, turning aside 34 of 35 shots to bag his third win in three tries. The rookie has allowed just five goals and has already bagged a shutout, so with Petr Mrazek out until at least next week, give Woll a look in deeper leagues (and consideration in Dynasty formats).

Givani Smith, RW, Detroit Red Wings (ESPN: 0.2 per cent; CBS: unowned): Detroit is high on Smith, giving him a two-year deal in mid-September. Now there’s talk that the Wings are considering bumping him up to the second line to give that unit a net front presence. Keep an eye on Smith in deeper formats.

Seth Jarvis, C, Carolina Hurricanes (ESPN: 5.1 per cent; CBS: 34 per cent): Carolina’s first round pick last year is really impressing, with points in five of his last six games. He’s a great passer and has been breaking even on faceoffs. Just 19, Jarvis has some serious upside.

Jake Oettinger, G, Dallas Stars (ESPN: 22.8 per cent; CBS: 46 per cent): In April, when Ben Bishop was ruled out for the season, we expected to Oettinger to take advantage of his chance, and sure enough the rookie came up big with five wins, a 2.10 GAA and .921 save percentage in April before cooling down the stretch. This season, Oettinger looks incredible with just five goals allowed in five games (four starts). Grab him while you can.

Formed in 1967, Chicago was originally called The Big Thing. In 1989, they released their third greatest hits package, Greatest Hits 1982-1989, and the lead track from this effort was “Hard to Say I’m Sorry/Get Away.” The first part of this combined track, of course, was a No. 1 hit for Chicago in 1982. The second movement was not part of the single, but only included with the album track.

By RotoRob
This entry was posted on Saturday, November 27th, 2021 at 3:06 pm and is filed under HOCKEY, RotoRob, The Wire Troll. You can follow any responses to this entry through the RSS 2.0 feed. Both comments and pings are currently closed.