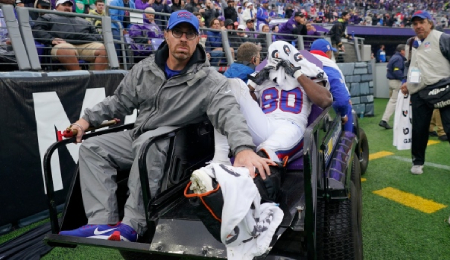 Jamison Crowder (80) busted his ankle on Sunday. (The Canadian Press)

With nearly a quarter of the 2022 NFL season in the books, the Buffalo Bills once again look like one of the top teams in the AFC.

And once again, this team is incredibly deep on both sides of the ball, ranking third in yards per game and tied for first (with the San Francisco 49ers) in yards allowed per game.

Small wonder the Buffalo is currently favoured in Week Five to roll over the Pittsburgh Steelers by two touchdowns based on odds by FanDuel.

In the wake of a massive comeback win in Baltimore on Sunday, really the biggest question facing Buffalo right now is its depth at wide receiver. Given all the injuries right now, there could be some surprise opportunities here for astute Fantasy owners.

Injury prone Jamison Crowder (six receptions, 60 yards) broke his ankle on Sunday and has subsequently been placed on the IR. The former Jet (who can apparently throw it as well as he can catch it — see video below) going down punches another hole in the Buffalo receiving corps: that makes four Bills WRs and their leading tight end currently banged up.

WR Isaiah McKenzie (15 receptions on 21 targets) suffered a concussion in Week Four and is not practicing; WR Jake Kumerow (four receptions on five targets for 64 yards) has been dealing with his own ankle injury since Week Three and is still not practicing; and WR Gabe Davis (14 targets) has also had a wonky ankle, but was finally able to be a full participant in practice on Wednesday, so it looks like he’s fully healthy now.

Considering TE Dawson Knox (111 yards receiving) is also not practicing thanks to foot and hamstring woes, there could be a hell of a lot of targets available behind No. 1 WR Stefon Diggs.

Khalil Shakir, limited to just four targets so far this season, is a major sleeper for Week Five — especially after enjoying some timely receptions in the comeback against the Ravens.

So, about that defense… uh, wow. Maybe we shouldn’t be surprised that Buffalo is atop the league in most defensive metrics, considering it led the NFL in both yards and points allowed last year.

However, the quality of offenses the Bills faced in 2021 was a tad underwhelming. This year, they’re doing it against some much stiffer competition. And what’s most amazing is the unit’s second half prowess — seven total points allowed, with none coming in the third quarter through the first four games. Holy crap.

Let’s see who Buffalo has shut down so far:

Now, things get a tad easier as Pittsburgh is expected to start rookie Kenny Pickett, who was picked off three times in the second half in Week Four, and will now be making his first NFL start. Uh, good luck with that, kid.

On the other side of the field, Josh Allen — now third all-time in Buffalo history in passing yards — has had back-to-back down games, and given that the Steelers’ pass D is decent compared to B-More’s and the injury issues discussed above, he could be in line for another substandard game. Then again, it’s all relative, right? Is there another QB this week that we’d want starting for our Fantasy team? Uh, not really.

Born Enos William McDonald, Skeets McDonald dabbled in rockabilly as well as country. Here’s “Teardrop Inn,” the B-side to his 1964 single “Down in Mexico.”

By RotoRob
This entry was posted on Thursday, October 6th, 2022 at 1:00 pm and is filed under FOOTBALL, Game Preview, RotoRob. You can follow any responses to this entry through the RSS 2.0 feed. Both comments and pings are currently closed.