The Wire Troll: Michael Carcone Gets Chance With Coyotes 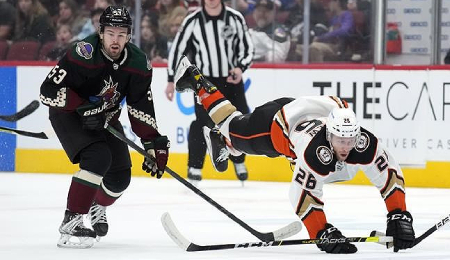 Michael Carcone (left) is getting more PT for the Coyotes. (Elliot Lake Today)

Welcome back to another week of Fantasy hockey. We are so close to the finish line… keep your foot on the gas and use the waiver wire judiciously.

This week, Clayton Keller‘s season is over thanks to a broken leg (see below for an opportunity this presents); Auston Matthews became the first Maple Leaf to reach 50 goals in almost 30 years; and both Sebastian Ahos tickled the twine at almost the same time — in different games.

Michael Carcone, RW/C, Arizona Coyotes (ESPN: unowned; CBS: unowned): Let’s dig deep here, shall we? With Keller (leg) done for the season, Carcone could be shifted up the lineup, giving him a golden opportunity to establish himself down the stretch. Carcone potted his first NHL goal last weekend (see video below), his only point through eight games to date (though he’s been adding a physical presence in the way of hits and his first NHL fight), and while he’d been playing in a fourth line role, he’s now seeing more ice time thanks to injuries. The rookie has 40-point upside, proving he can excel in the AHL with 24 goals and 41 points in 48 games this season. Looking to take a late-season flier on someone? Carcone could fit the bill as he tries to breathe some life into a disastrous season for Arizona.

Sean Durzi, D, Los Angeles Kings (ESPN: 10.2 per cent; CBS: 33 per cent): Durzi is another relatively unknown rookie in Fantasy circles, but he’s been trending up as the season wanes. He’s -10 in traditional plus/minus numbers, but has managed 20 assists in a bit over 19 ATOI. Durzi was on a nice roll a couple of weeks ago with six points in seven games, but what we really like is that he’s been producing on the PP and that his PT was way up in March — and he’s delivered. A second round pick in 2018, this kid has some nice upside, but with plenty of blueline talent on the way for the Kings, the time to establish himself is now.

By RotoRob
This entry was posted on Saturday, April 2nd, 2022 at 11:14 am and is filed under HOCKEY, RotoRob, The Wire Troll. You can follow any responses to this entry through the RSS 2.0 feed. Both comments and pings are currently closed.