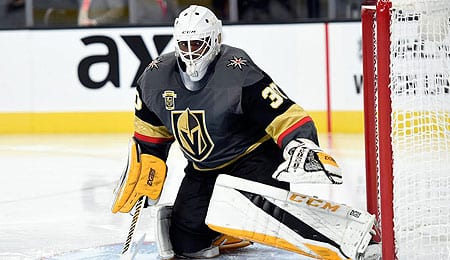 Malcolm Subban is a solid choice if you need goaltending help. (NHL.com)

Welcome back to another week of Fantasy hockey. We’re into December now, meaning we’re just about at the one-third mark. There’s still tons of time to make your move, so use that wire judiciously, my peeps!

This week, the Wild learned it will be without defenceman and leading shot blocker Jared Spurgeon for two weeks because of a groin strain; Rangers centre Mika Zibanejad is currently dealing with a concussion; and Edmonton’s problems got bigger as No. 1 goalie Cam Talbot has landed on the IR with an upper body injury.

Tom Wilson, RW, Washington Capitals (ESPN: 7.3 per cent; CBS: 21 per cent): This big, bruising forward has suddenly found himself on a line with Alex Ovechkin and Niklas Backstrom, and you don’t need us to tell you what kind of offensive potential that plum assignment offers. Although the top line was shut down by the Kings on Thursday, Wilson is seeing more ice time in recent matches, and could start to produce a lot more offense while continuing to pile up his usual collection of penalty minutes and hits. He could become a top power forward playing with this kind of talent.

Malcolm Subban, G, Vegas Knights (ESPN: 35.9 per cent; CBS: 43 per cent): Marc-Andre Fleury (concussion) still hasn’t resumed practicing, leaving the Vegas crease in the hands of Subban. Since taking over last week, Subban hasn’t been stellar, but if you need a goalie, he had been pretty great so far this season before landing on the IR in late-October and getting activated a couple of weeks ago. He’s also a goalie driven to improve (as you can tell from the interview below).

Marian Gaborik, RW, Los Angeles Kings (ESPN: 3.6 per cent; CBS: 10 per cent): The veteran returned to action last week and has wasted no time is reminding us that he’s a potent offensive player. After potting two goals on Thursday, Gaborik has four points through four games with a +4 rating. Currently slotted on the third line with impressive youngster Adrian Kempe and veteran Trevor Lewis, Gaborik is a highly skilled player that won’t remain on the wire for long, so you’d best move on this one pronto!

By RotoRob
Tags: Tom Wilson
This entry was posted on Saturday, December 2nd, 2017 at 4:35 pm and is filed under HOCKEY, RotoRob, The Wire Troll. You can follow any responses to this entry through the RSS 2.0 feed. Both comments and pings are currently closed.