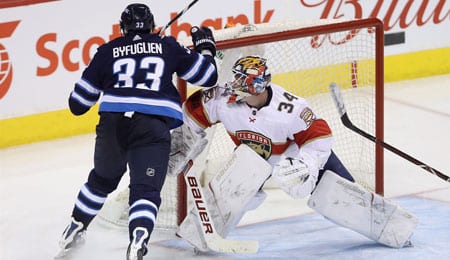 James Reimer has forced a timeshare in the Panther net. (The Canadian Press/Trevor Hagan)

Welcome back to another week of Fantasy hockey. We’re into mid-February now, a mere week and change away from the trade deadline, and it’s time for you to make your final push towards securing a championship.

This week, Mikko Koivu (reconstructive knee surgery) expressed confidence in his ability to return to the NHL next season at age 36; Pittsburgh blueliner Olli Maatta is out indefinitely with an upper body injury; and the Pens also lost star Evgeni Malkin to a one-game suspension for swinging his stick like it’s still the ’70s.

James Reimer, G, Florida Panthers (ESPN: 3.8 per cent; CBS: 17 per cent): It’s been quite some time since Reimer stormed onto the scene for Toronto with a huge second half in 2010-11. The veteran’s had an up and down career since then, and while his play has gone steadily downhill over the last three seasons, he’s been showing signs of life this month with two wins, a 2.43 GAA and .927 save percentage. In fact, take away his rough outing Sunday against the powerful Lightning, and Reimer has looked very sharp lately. On Valentine’s Day, he showed some love for his Fantasy owners, saving 41 of 43 shots (see video below for his best save of the night) to backstop the Cats to a 3-2 shootout win over a superb Calgary squad. With Roberto Luongo still looking shaky, this is worth watching.

Brandon Pirri, LW, Vegas Golden Knights (ESPN: 11.5 per cent; CBS: 25 per cent): Recalled in late-December, Pirri looked amazing when first brought up, but has slumped recently. Still, he scored Tuesday and had two shots while going +1 on Thursday, so is showing signs of life. There’s talk that Pirri could move into a top six role with the top line not playing as dominantly as it did last season. As an UFA this summer, he’s sure to garner some serious interest from teams looking to add scoring.

Dominik Kahun, RW, Chicago Blackhawks (ESPN: 1.7 per cent; CBS: 9 per cent): If you’re searching for a replacement for David Pastrnak (thumb) for your team, you might want to consider red-hot rookie Kahun. Kahun, now playing on the second line with Dylan Strome and Alex DeBrincat, had racked up seven points in four games before getting shut out on Thursday. With nine points in seven games this month, Kahun is really coming into his own at the right time for the scorching Blackhawks. Better yet, the kid is the only NHL player to play every game this season without taking a penalty, and no one has ever done that over an 82-game season. In fact, the last to do it was Craig Ramsay for the Sabres in 1973-74, when the NHL schedule was 78 games.

Johan Larsson, C, Buffalo Sabres (ESPN: 0.2 per cent; CBS: unowned): Larsson makes for an interesting short-term option with Casey Mittelstadt (lower body) still out. Larsson snapped a slump with a goal on Tuesday, going +1 while playing nearly 18 minutes for the second time in the last three games. It was his first point since returning from an injury a week and change ago. Larsson has already surpassed his goal total from last season despite playing on the fourth line.

Danton Heinen, LW, Boston Bruins (ESPN: 2.5 per cent; CBS: 18 per cent): After such an impressive rookie effort last season, Heinen has been mostly a disappointment in 2018-19. However, he had potted three goals and three assists in four games (highlighted by Tuesday’s three-point showing that included his ninth of the season) before getting shut out on Friday. It’s too late to salvage his sophomore campaign, but that doesn’t mean Heinen isn’t worth grabbing down the stretch.

Tyler Ennis, LW, Toronto Maple Leafs (ESPN: 0.5 per cent; CBS: 3 per cent): Ennis was having a decent bounce back season, including a two-goal effort just four days before he got hurt in late-December. Finally ready to return, he’s had to wait until an Andreas Johnsson injury before getting another shot on the fourth line. Ennis has been involved in 100 per cent of the goals scored while he’s been on the ice this season, but he’s going to need to generate more shots on goal to be useful down the stretch.

Kevin Boyle, G, Anaheim Ducks (ESPN: unowned; CBS: 4 per cent): Undrafted rookie Boyle has been showing a little something something in the Ducks net this week, making 35 saves to shut out the Canucks on Wednesday and then saving 26 of 28 against Boston on Friday. With Anaheim having dropping 20 of 23, it has to shake things up a bit, so giving Boyle a shot is part of that plan. It’s worth seeing how this plays out.

Brazilian jazz-funk legend Azymuth first began in 1973, and has been at it since. In 1982, the band released Telecommunication, a seminal jazz fusion effort and essentially its eighth studio offering. The classic from this album was “Last Summer in Rio,” which takes you on a dreamy journey. Enjoy.

By RotoRob
Tags: James Reimer
This entry was posted on Saturday, February 16th, 2019 at 2:59 pm and is filed under HOCKEY, RotoRob, The Wire Troll. You can follow any responses to this entry through the RSS 2.0 feed. Both comments and pings are currently closed.