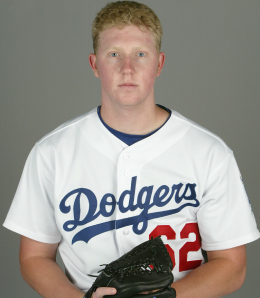 Greg Miller never panned out as a prospect. (Dodgers Way)

It’s time to get back into our 2002 MLB draft deep dive with Part Seven. Now that the official first round is done, let’s recap how things panned out in the supplemental round.

Today, we examine the 11 compensation picks that were taken between the first and second rounds of the draft. This section included a couple of useful choices, but mostly consisted of players that didn’t pan out.

Without further ado, here’s a closer examination of picks 31-41 from the 2002 MLB Draft.

The Dodgers were awarded this pick after Chan Ho Park signed elsewhere. Miller spent seven seasons in the minors, all in the Dodger system, topping out at Triple-A in 2008 (see video below of him warming up in the bullpen at Triple-A in 2007). After flaming out in 2009, he was inactive until 2013 when he spent one year in Indy ball before calling it a day. Miller was once thought to be a very promising prospect that was on the fast-track to the bigs, but shoulder issues derailed that plan. He goes down in Dodgers history as one of their biggest draft busts since the turn of the century.

The Cubs got this pick after David Weathers signed elsewhere. Hagerty lasted just four seasons in the minors, never getting past High-A. He then spent two years pitching in Indy leagues before quitting. Similar to Miller, injuries really destroyed Hagerty’s chances as he was never the same after 2003 Tommy John surgery. Hagerty actually got another minor league contract with the Cubs in 2019, but an elbow woe ruined that, too. The 6’7″ lefty was once viewed as someone that could team with Mark Prior and Kerry Wood to give the Cubs an incredible rotation, but that was not to be.

This pick was Cleveland’s compensation for losing Juan Gonzalez. Whitney spent eight years in the minors for three different organizations, but topped out at Triple-A — spending just six games at that level. Despite posting a career OPS of 775, he never got the call to the bigs, and wound up retiring in 2010. Perfect Game dubbed Whitney the best right-handed high school hitter of the draft, yet he never really delivered on that promise.

When Steve Karsay signed elsewhere, Atlanta was granted this draft choice. Meyer actually spent parts of five seasons for three different teams in the majors — which is impressive considering this list so far — but only managed a -0.9 WAR, meaning he wasn’t even a replacement player level. By far his best season came in 2009, when he was a workhorse reliever for the Marlins and recorded a 140 ERA+. It was a good enough showing that Meyer slotted in the top 100 in our 2010 Relief Pitcher Rankings. After being released by Baltimore in 2013, he was done. Meyer has been a minor league coach/manager since 2014. He was once considered the key prospect that Oakland received when Tim Hudson was traded to Atlanta, but Meyer was simply awful in two seasons as a swingman for the A’s, proving far too hittable.

The A’s got this pick when Jason Giambi bolted as a free agent. Brown also managed to make the majors, but only appeared in five games in 2006. Still, with a career WAR of 0.1, he tops this list up to this point — sadly. Brown is a big part of the Moneyball lore because he was considered quite unathletic (read: obese), yet posted impressive minor league numbers. He retired in Spring Training in 2008 despite showing solid contact rates at Triple-A in 2007 over a large sample size.

The Cubs earned a second supp pick after losing Rondell White, and then again went after pitching. Unfortunately, this one didn’t work out either as Blasko spent just two years in the Cubs system, topping out at Double-A. In his pro debut, he led the FSL in ERA, but after 2004, he missed two seasons, resurfacing in Indy ball in 2007. Blasko caught on with the O’s, but had major gopheritis at High-A, so was done after being released in Spring Training in 2008. He returned to his alma mater to be an assistant coach with Purdue. Blasko enjoyed sweet K rates in his final year, but was way too wild to be considered for a promotion.

Thanks to losing Jason Isringhausen, Oakland got another supp pick in this year’s draft. With it, they bagged Obenchain, who would spend five seasons in the system, never advancing beyond Double-A, before being released and finishing his career in 2007 in Indy ball. While in the lower levels, he was hit in the head by a fly ball during batting practice and, sadly, that seemed to stall his progress.

With Todd Van Poppel leaving, the Cubs bagged a third supp pick, and once again threw a dart at a pitcher. And once, again, they missed. Clanton wound up pitching in just two games (four innings) over two seasons, never getting higher than Low-A. Signed for $875,000, he endured incessant health woes before the team finally released him in 2006. Interestingly, Clanton was not shy with his feelings about how the organization handled him.

Johnny Damon‘s departure gave the A’s a third supp pick, and they used it to nab Teahen, who was easily the best player selected in this round. Teahen recorded 2.6 WAR over his career, but none of it came with the A’s because he was dealt to K.C. as part of the three-team Carlos Beltran trade in 2004. In five seasons with the Royals, Teahen recorded a solid 749 OPS before getting traded to the Pale Hose. He spent two years with them, but his OBP took a tumble, so by 2011 (when he headed into the season he was still a top 40 third baseman), he was sent to Toronto, where his extra-base pop all but disappeared. Teahen bounced around the minors for a couple of years and was done after being released by the Giants in 2014. In his second season, he looked like an emerging power-speed threat, bashing 18 homers and 10 steals in just 109 games, but he would only top that SB total once and never again hit that many dingers.

The Reds were unable to sign their 2001 first round pick, Jeremy Sowers, so got this pick as compensation. With it, Cincy targeted infield help in the form of Schramek, but after four seasons in the organization — none past Double-A — he was released in 2006 and done with his career. Schramek flashed some power potential midway through his minor league career, but he struggled to make contact, and in the end he simply didn’t have enough pop to compensate a poor hit tool.

Cleveland also failed to sign its 2001 first round pick (Alan Horne), hence it was awarded its second (and the final) pick of the 2002 supplemental round. With it, the Tribe plucked Schilling, who lasted six years in the minors (the final one with the Mets), but could never reach Double-A. He was released by the Mets in Spring Training in 2008, hanging ’em up after that. Schilling could definitely draw walks, but that was really all he excelled at. Prior to the draft, he was said to be an athlete who had one of the best bats in the country with “shocking” power, but the BA never showed up and the only thing shocking about his pop was how rarely it was seen.

American R&B band The Spinners have been active since 1954. In 1975, they released their sixth studio album, Pick of the Litter, featuring the hit “Games People Play,” which rose as high as No. 5 on the Billboard 100.

By RotoRob
This entry was posted on Wednesday, July 27th, 2022 at 11:51 am and is filed under BASEBALL, Draft report, RotoRob. You can follow any responses to this entry through the RSS 2.0 feed. Both comments and pings are currently closed.