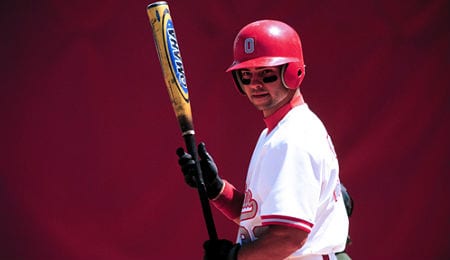 And we’re back! With the 2015 Major League Baseball season just around the corner, we pick up our retrospective of the 2002 MLB Draft with Part Four.

Today, we look at five picks from the first round, four of which have gone on to have stellar Major League careers. Without further ado, a closer examination of picks 16-20:

The Skinny: Swisher comes from a baseball family, the son of former All-Star catcher Steve Swisher, and the Athletics ended up with a solid find in the switch-hitter out of Ohio State. Nick cracked the big leagues in 2004 and spent four seasons in Oakland before stints with the White Sox, Yankees and Indians. Swisher has had a solid if not spectacular career, with a run of nine straight seasons of 20 or more home runs that ended last season. He’s never hit above .288 in a season.

Strengths: Swisher appealed to scouts because of solid power from both sides of the plate and an aggressive approach that has mostly served him well at the professional level. He also had the ability to play the outfield with a relatively strong arm in tow. In the majors, Swisher has played at least 100 games at all three outfield positions as well as almost 500 games at first.

Weaknesses: With an aggressive approach comes many whiffs, and Swisher has struck out at least 110 times in all 10 of his full Major League seasons. He has failed to live up to his big contract with the Indians, batting .231 with 30 home runs over two seasons, including an injury-plagued 2014 campaign in which he was near the bottom of MLB rankings in wins above replacement (-1.1 WAR).

Final Analysis: It’s hard to argue with a pick that is still an everyday player after more than a decade in the majors, and despite his relative journeyman status, Swisher — who didn’t forget OSU after he got huge (see video below) — has posted consistent power and on-base numbers (.353 career OBP). He parlayed success in the Big Apple into a four-year, $56 million deal with his home state team in 2013, and needs to bounce back in a big way in 2015 to ensure he survives the life of his contract. The fact that he’s coming off surgery on both knees does not bode well.

The Skinny: Hamels has had a superb career, but he may be on his way out of Philadelphia as he has been the subject of relentless trade rumours since last season. He was quite a story coming out of “The Factory,” Rancho Bernardo HS in San Diego, considering he severely broke his arm after his sophomore season but rebounded to post other-worldly numbers during his senior season (10-0, 0.39 ERA, 130 strikeouts in 71 innings).

Strengths: Hamels has never been an overpowering pitcher, but was always praised for his devastating changeup, 12-6 curveball and impeccable control. At 6’3”, he simply needed to add some bulk to his frame but his polish and physical skill set superseded a questionable medical history because he was considered the best lefty available in the 2002 draft. In the Majors, Hamels has posted strong regular season numbers, but truly emerged in the 2008 postseason when he led the Phillies to their first World Series title in 28 years by winning both NLCS and World Series MVP honours.

Weaknesses: When Hamels injured the bone between his elbow and shoulder playing street football, he elected to keep the ailment a secret, which later resulted in a break so severe doctors needed to fuse the fractured bones to metal rods inserted into the marrow. That scared several teams off, but not the Phillies, who were impressed by the way he bounced back and dominated as a senior.

Final Analysis: Though he sometimes gets lost in the conversation of the top hurlers in baseball, Hamels is worthy of consideration among the game’s elite. He has been very durable, starting at least 30 games in each of the last seven seasons, and 2014 may have been his best yet despite missing time at the start of the season with biceps tendinitis. Hamels is 108-83 with a 3.27 over nine years, allowing just 8.0 hits per nine innings and posting a remarkable 3.77 BB/K ratio. The 2008 playoffs were a true coming-out party for him, when he snagged all that hardware by going 4-0 with a 1.80 ERA overall. It will be interesting to see if the incessant trade talk proves to be a distraction to the veteran as he reports for Spring Training.

The Skinny: The White Sox thought they were getting a dominant future closer who drew comparisons to Randy Myers, but ended up dealing Ring and two other prospects to the Mets a year later for Roberto Alomar. Ring bounced around and only occasionally found success in stints with the Mets, Padres, Braves and Yankees before his run ended in 2010.

Strengths: Ring’s effortless delivery, mid-90s fastball, and sharp curveball were seductive traits for the White Sox, who clearly were (overly) impressed with his 17 saves during his junior year at SDSU and gave him a $1.6 million signing bonus.

Weaknesses: After joining the Mets, Ring needed to change his delivery to a more sidearm motion to gain more movement on his pitches, and also battled weight problems at times. He could never stick with a team, with his 22 1/3 inning pitched in 2008 with Atlanta being his most extensive action in any season.

Final Analysis:Though he was an outstanding college pitcher in the Mountain West Conference, it was a bit of a puzzling pick by Chicago in the sense that Ring was basically going to be groomed to be a reliever, not a starter. Of course, this was the trend around that time — plucking college closers who were vey advanced and could be rushed to the majors, albeit with limited upside. The southpaw appeared in 99 Major League games, all out of the bullpen, finishing with a 5.29 career ERA — proof positive that this habit of grabbing closers in waiting was not always a foolproof approach.

The Skinny: Loney was never going to project as a power-hitting first baseman, but he has such solid hitting mechanics that it is hardly a surprise that he’s had – and likely will continue to have – a strong professional career. In nine big-league campaigns, he has posted a .285 average and 95 home runs while getting on base at a 34 per cent clip.

Strengths: An ESPN.com scouting report in 2004 noted that Loney’s swing is “a thing of beauty, the Brooke Burke of baseball swings.” Loney had a successful high school career in the Houston area against stiff competition, exceeded predictions that he would fall between the second and fifth rounds, and has not disappointed at the pro level with the Dodgers, Red Sox and Rays. More to his credit, he has more than held his own against left-handed pitching in his career, hitting .256 against southpaws, and he has also never fanned more than 95 times in a season. Loney has also been stellar in the field, although he’s yet to win a Gold Glove.

Weaknesses: Somehow, Loney’s best “power” season (and we need to use the term lightly) was in 2007, when he was recalled in June and hit 13 home runs. He has never been a true run-producer, but rather a middle-of-the-order “professional hitter” type with a penchant for singles and doubles. In the last seven years, Loney’s slugging percentage has been under .400 five times.

Final Analysis: The Dodgers got six good seasons out of Loney before moving him to Boston in a 2012 blockbluster trade, and after a short stop in Beantown, the Rays have gotten a first baseman who has played in all but 11 games over the past two seasons. Loney has been an extremely dependable player and tremendous clubhouse presence and remains Tampa Bay’s starting first baseman as we head into the new season.

The Skinny: “Keiunta” Denard Span was a highly touted athlete from the Tampa area when the Twins drafted him, and he has emerged as one of the game’s better leadoff hitters between successful stints in Minnesota and Washington for three division winning teams over seven seasons. He is a speed demon, swiping 141 bags, and has made a number of highlight-reel catches in the process.

Strengths: Speed and defense define Span’s game, and though he’s never hit more than eight home runs in a season, he has twice led the league in triples in his career. He was considered one of the fastest prospects available prior to the 2002 draft and hasn’t disappointed in that category, while also — like Loney — having sustained success against left-handed pitching (.279 career average vs. southpaws).

Weaknesses: Span has made some spectacular catches, but is considered to have an average outfield arm. Though no one ever expected him to be a power threat, he’s never even touched double-digits in long balls in his career, having managed just 32 dingers in seven MLB seasons. Last season, Span had a career-high 39 doubles, but failed to reach even 40 RBI in 610 at-bats.

Final Analysis: Span has had a very good career to this point and should continue to produce for the Nationals for years to come. Minnesota has to regret dealing him for minor-leaguer Alex Meyer after the 2012 season (although, in fairness, Meyer still has the upside to equalize that deal in the future).

Now it’s your turn. In the comments below, let us know what you thought of this section of the 2002 MLB Draft.

By Michael Seff
Tags: Major League Baseball
This entry was posted on Wednesday, February 18th, 2015 at 4:56 pm and is filed under BASEBALL, Draft report, Michael Seff. You can follow any responses to this entry through the RSS 2.0 feed. Both comments and pings are currently closed.