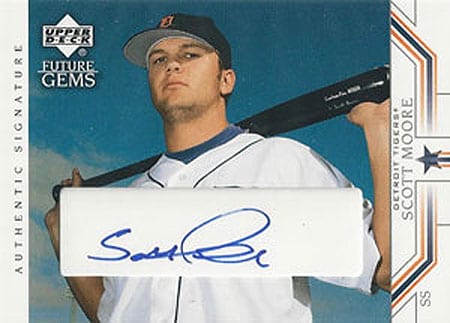 Scott Moore never made it to the bigs as a Tiger. (Baseball-almanac.com)

Let’s continue our dissection of the 2002 MLB draft. So while you Bryce Harper owners cringe as your boy goes under the knife, let’s review picks six through 10 of the draft.

The Skinny: Scroll down from the top of the 2002 Draft, and here is your first player to make an All-Star team. Greinke is still going strong as one of the game’s top pitchers for the Dodgers, but made his mark in Kansas City with a devastating curveball and a Cy Young season in 2009. He had his share of off-the-field issues, dealing with depression and social anxiety disorder to the point that he almost quit baseball after the 2005 season, but stuck with it and is all the wiser (and richer) for it today. At 6’2”, 195 pounds, Greinke isn’t an overpowering presence, but he is calm and composed and has excellent command of his pitches.

Strengths: Greinke doesn’t have an overpowering fastball, but can hover around the mid-90s for most of the game. His bread and butter pitch is his big, slow hook as well as an outstanding changeup, both of which he will throw at virtually any time. Greinke’s career K/BB ratio is 3.54.

Weaknesses: Stuff has never been in question for Greinke, only his mental fortitude and passion for the game, but many of those questions have subsided in recent years after he sorted things out before asking to be dealt away from Kansas City.

Final Analysis: Greinke is considered one of the game’s steady forces, though it remains to be seen whether he truly warranted a six-year, $147-million deak. So far, so good in Los Angeles, where he went 15-4 with a 2.63 ERA in 28 starts last year and is 4-0 with a 2.45 ERA through five starts this season. Though it wasn’t always rosy in Kansas City, Greinke did pick up a Cy Young award, so the Royals probably don’t feel cheated by this selection, especially considering they are still enjoying several pieces of the return from that deal.

The Skinny: There’s not much skinny going on with Prince (hell, he can’t even resist eating nachos while he’s playing as you can see in the video below), but the Brewers landed a bona fide star in the burly lefty and son of Cecil, who was a three-time All-Star in Detroit. Now with Texas, Prince is still a masher, but is dogged somewhat by his lack of clutch production (.172 BA with RISP so far this season). The 5’11”, 275-pound slugger entered 2014 with 285 career home runs, 230 with the team that drafted him.

Strengths: Power, power, and more power. Fielder was born to do what his daddy did so well for so many years for Detroit, and he hasn’t disappointed, averaging nearly 36 bombs in his eight full seasons. He has handled lefties surprisingly well too, posting a .265 career average with 72 homers against them.

Weaknesses: Although he’s been very durable over his career, it remains to be seen how Fielder’s big body will hold up over the next few years. He’s still just 29 and not in bad shape, but isn’t exactly the slim, athletic type. Fielder has also been dogged by a .194 career postseason average in four trips to the playoffs, including a dismal 1-14 (.071) showing in the 2012 World Series. Fairly or unfairly, he’ll need to get over that to be considered a true superstar.

Final Analysis: One of the true gems of the 2002 draft and a primary reason the Brewers came two games away from the 2011 World Series, Fielder has been fun to watch in his career, but he lasted just two years in Detroit before being shipped to Texas to try to regain his All-Star form.

The Skinny: Moore, taken higher than expected, never emerged with the Tigers, and wound up being traded less than three years after being selected. He essentially became a “pit stop” guy, with stints with the Cubs, Orioles and Astros spanning parts of five seasons. The 6’2”, 170-pound Cal State Fullerton product had solid speed and a great infield arm, but his power and all-around game never really took off.

Strengths: Moore could fire it across the infield at almost 90 mph, and scouts likened his left-handed swing to that of young (at the time) third baseman, Eric Chavez of the Athletics. Moore had pop, and was considered the best power hitting prospect in the Tiger system in 2004 after smoking 14 dingers in High-A at age 20.

Weaknesses: There were minor concerns about Moore’s attitude and whether he could adapt to wooden bats and hit for power consistently, which turned out to be unfounded (16 home runs in 152 career games). His supposedly strong speed never materialized, as he stole just three bases at the big-league level. Defensively, Moore couldn’t stick at shortstop, spending most of his career at the hot corner.

Final Analysis: Certainly a bust from the Tigers’ perspective, Moore will be remembered as a utility journeyman, last seeing action in the bigs in 2012 with Houston (.259 BA, nine homers, 26 RBI in 72 games). The book is not yet closed on this 30-year-old, now in the Cardinals organization, as he’s off to a nice start at Triple-A, batting .256 with nine doubles through 25 games.

The Skinny: The tall (6’5″) southpaw started Game One of the 2007 World Series, the reward for his best Major League season in which he went 17-9 with a 4.22 ERA in 215 1/3 innings. Francis, who is currently in the Reds organization (but not on their 40-man roster), played eight of his nine seasons with Colorado, making a brief stop in Kansas City in 2011, but always seemed to offer more promise than production. The British Columbia native posted winning records in his first four seasons and none since.

Strengths: Francis was always durable, averaging close to 139 innings per season, and was tough on lefties with a deceptive slurve to complement his low-90s fastball. His early years were his best, as he averaged 137 strikeouts in his first three full seasons.

Weaknesses: Injuries began to become an issue, as Francis missed the entire 2009 season after shoulder surgery in February of that year, and things went south in 2013 when he was relegated to the bullpen halfway through the season (although he remains a starter Triple-A). He was extremely hittable later in his career, permitting 11.04 H/9 IP over his last four seasons.

Final Analysis: The Rockies got some mileage out of Francis, but it all seemed to go downhill after the World Series in 2007. Old reliable simply became old news, and if he is unable to get back to the Show, his final numbers will read 70-78 with a 4.94 ERA in 228 career games pitched. Not horrible numbers, but when your similarity score (as per Baseball-reference.com) is closest to Josh Fogg, that’s not good news.

The Skinny: The Rangers absolutely reached on Meyer out of the University of South Carolina, and the final results showed. The lefty-swinging shortstop, all 5’11”, 183 pounds of him, was not regarded as a top prospect, even though he had earlier been drafted out of high school by the Dodgers in the second round. Meyer played a grand total of five Major League games when it was all said and done.

Strengths: Meyer had terrific bat speed and plus baserunning speed, and perhaps the thought process was that he was more polished coming out of college at 21 years old.

Weaknesses: Meyer struggled to adjust to wood bats, and didn’t have great hands in the field. His lack of development was the reason he played just five games in a Rangers uniform, all in 2006, and his last gasp with a Major League club came in 2010 when the Angels granted him free agency. Drafted to be the ultimate replacement for the Rangers’ shortstop at the time (some dude named Alex Rodriguez), perhaps the pressure proved too great for Meyer.

Final Analysis: An absolute flop, Meyer’s tools never materialized the way Texas envisioned, and the “reach” factor came back to bite the Rangers in the end. He walked away from his playing days with three hits and eight strikeouts in 14 career at-bats. Well, we guess that’s better than Moonlight Graham. Meyer returned to college to finish his degree and became an assistant coach for the Gamecocks.

Now it’s your turn. Let us know in the comments below how you thought this section of the draft turned out.

Crave more in-depth Fantasy analysis? Then join us every Thursday at 9 p.m. EST for RotoRob Fantasy Baseball Weekly Podcast on Blogtalkradio as we entertain and edify you for an hour or more each week. This week only, we move to Wednesday at 1:30 p.m. so the football peeps can take our Thursday night slot and cover the NFL Draft live. On Wednesday, Josh Johnson will host RotoRob Fantasy Baseball Podcast with guest Chris Tubbs of KWSN.com. Tune in here.

By Michael Seff
Tags: 2002 MLB Draft
This entry was posted on Monday, May 5th, 2014 at 6:27 pm and is filed under BASEBALL, Draft report, Michael Seff. You can follow any responses to this entry through the RSS 2.0 feed. Both comments and pings are currently closed.