The Wire Troll: Braxton Garrett Is Flying Off the Wire 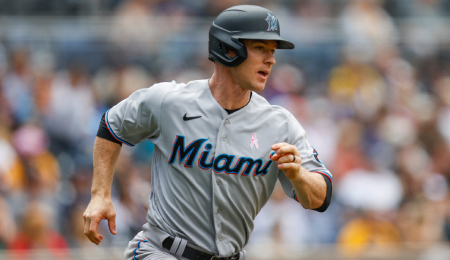 Joey Wendle has been hitting well for the Fish. (Mike McGinnis|AP)

Welcome back to another week of Fantasy baseball. With the unofficial second half now officially underway, you’ve got to use these next few weeks to be single-minded about either: (a) increasing your lead; or (b) reducing your deficit. Either way, the waiver wire is your best friend.

This week, the Trevor Bauer sexual assault story took another turn for the worse for the embattled pitcher; Jacob deGrom took another step towards returning with a successful simulated game; and the Giants are hoping to strike gold with the addition of free agent reliever Trevor Rosenthal, who hasn’t pitched in the majors since 2020.

Braxton Garrett, SP, Miami Marlins (ESPN: 9.1 per cent; CBS: 31 per cent): Last August we recommended Garrett, but it wasn’t our best call as he put up a 6.35 ERA that month before getting demoted to Triple-A. However, since the start of July, he’s been on fire, recording a 1.80 ERA with a K per inning. Okay, the competition hasn’t been great (two starts against Pittsburgh and one vs. Washington), but Garrett has already shattered his career best in Fantasy points with 97.5. Traditionally, his curveball was his best weapon, but this year, his fastball is driving this success.

Tyler Gilbert, SP, Arizona Diamondbacks (ESPN: 0.2 per cent; CBS: 2 per cent): Just under a year ago, we pimped Gilbert and it worked out well as he flashed decent command that month before putting up a 3.65 ERA in September. This season has been a tougher go as the southpaw has bounced back and forth between Arizona and Triple-A, proving way too hittable in the minors. However, since slotting back into the Snakes rotation a couple of weeks ago, Gilbert has looked much better, recording a 2.51 ERA through three starts, and his job security just improved thanks to Dallas Keuchel getting DFAed. Gilbert is still seeking his first win in the majors this year, but as an option in a deep NL-only league, he is worth considering while he’s on a bit of a roll.

Joey Wendle, SS/2B/3B, Miami Marlins (ESPN: 11.6 per cent; CBS: 16 per cent): Early last year, we wondered whether Wendle could be worth a look and he wound up seeing his most action since 2018 to justify our faith. This year, in limited PT, he’s hit well (including a three-hit, two-RBI performance Friday) even if the pop has regressed, but is again in line for a ton of action down the stretch with news that Jazz Chisholm Jr. (back) will be out around six weeks. If nothing else, Wendle is capable of picking it in the field (see video below for another amazing example of his glovework) and offers multi-position eligibility, which is always welcome. The other bonus is that he mostly occupies the leadoff spot for the Rays, so (in theory) could be a decent source of runs, even if he hasn’t been lately (just one in July).

Corbin Carroll, OF, Arizona Diamondbacks (ESPN: 1.8 per cent; CBS: NA): No. 9 in our Top 100 Prospects list this spring, Carroll has done nothing to quell that excitement despite missing time with an injury. He racked up a ton of steals at Double-A, earning a recent promotion to Triple-A, where he’s continuing to put up total bases. When you consider that Carroll missed all of 2020 because there was no season, and most of last year with an injury, what he’s done this season is beyond amazing. This dude headlines one of the game’s best farm systems, and given his current trajectory, we wouldn’t be surprised to see him make his MLB debut later this season.

Miguel Amaya, C, Chicago Cubs (ESPN: unowned; CBS: NA): Amaya has missed all season in the wake of Tommy John surgery in November, but he’s just been activated from the IL at Double-A. Unfortunately, his further development behind the plate will have to wait until 2023, but he will get reps with the bat for the rest of the season. Amaya took a nice step forward last year at Double-A, only batting .215 but getting on base at an elite level (.406 OBP). Reaching Triple-A this year is not out of the question at all for him, and long-term he looks like a nice dynasty option at an always-tough-to-fill position.

It took some time, but Shadowy Men on a Shadowy Planet finally did accept their status as a surf band. From their 1986 7-inch EP Wow Flutter Hiss ’86, here’s “Customized.”

By RotoRob
This entry was posted on Sunday, July 24th, 2022 at 12:11 pm and is filed under BASEBALL, RotoRob, The Wire Troll. You can follow any responses to this entry through the RSS 2.0 feed. Both comments and pings are currently closed.