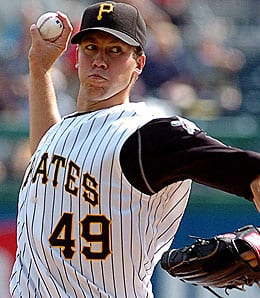 [Editor’s note: Please join me in welcoming Michael Seff to RotoRob.com. This is his first contribution and we hope to have him become an integral part of both our baseball and football writing teams.]

Pitching was the name of the game early and often in the 2002 MLB draft, but it was more bust than boom ultimately for the Pirates, Reds, Orioles and Expos, as they whiffed on their selections. Seven first-rounders earned at least one All-Star berth in their career (Joe Saunders, really?), but when the third overall choice doesn’t even have a Wikipedia page, you know there were some serious misses here. Zack Greinke, Prince Fielder, Cole Hamels and Matt Cain were the biggest studs of the ’02 class, while the search goes on for the likes of Drew Meyer, John McCurdy and Derick Grigsby.

The Skinny: Bullington seemed to be the physical prototype primed to succeed at the big-league level: 6’5”, 225 pounds with a fastball that reached 96 mph with sink and a sharp slider. He went 29-11 with a 3.36 ERA and 13 complete games in three seasons at Ball State, but became a monumental flop in the pros. Bullington received a $4 million signing bonus from the Pirates, then proceeded to post an 0-3 record and 5.89 ERA in just six games with the Buccos before his tenure mercifully ended after the 2007 campaign. In 2010 with KC, he earned his one and only big league win (shortly after we identified him as having a shot), ending his career 1-9 with 5.62 ERA in 26 games — just 10 of which were starts.

Strengths: Bullington was physically gifted and his size and strength was what appealed most to scouts. He had plus stuff and threw hard, reaching the mid-90s with his fastball, and his slider had sharp bite.

Weaknesses: Where to begin? Injuries were the crux of the problem for Bullington, and after a torn labrum, his velocity in the majors was never quite where it was in college. Even in the minors, he never posted the strikeout numbers expected of a top pick, averaging just 6.7 K/9 IP over eight entirely underwhelming seasons.

Final Analysis: Bullington is currently pitching in Japan for Hiroshima (see video below), but still represents one of the worst No. 1 overall picks of all time. The Pirates suffered great humiliation for this and it happened to fall right in the middle of a two-decade-plus run of losing seasons for them. The 2002 draft didn’t appear to feature any can’t-miss pitchers, but Bullington looked like the best of the bunch. A dozen years later, hindsight has proven quite cruel.

The Skinny: Upton was, is, and will continue to be a pure athlete full of the dreaded “P” word (that’s potential, by the way). He showed plenty of flashes with some very productive seasons in Tampa Bay, but ultimately wasn’t the superstar the Devil Rays (now the Rays) envisioned when they took him second overall. The wiry (6’3″, 180) Upton got the largest signing bonus of any 2002 first-rounder with $4.6 million. He ended up finding a home in the outfield after shortstop and second base did not prove to be an effective fit.

Strengths: Athletic as they come, Upton came equipped with premier speed and terrific range in the field. He has quick hands and reaction time.

Weaknesses: There were moderate concerns about Upton’s bat, which have turned into full-blown panic because these days he has almost become a running joke, striking out seemingly at least once a game, after signing a five-year, $75 million deal with Atlanta. His power has declined and he continues to have trouble adjusting to pitchers at the plate. Whether it is the pressure of the big contract or eroding skills remains to be seen.

Final Analysis: All told, this was a very good pick by the (Devil) Rays because they got a lot of mileage out of Upton. He has been up and down his whole career, but his longevity, if nothing else, keeps people intrigued about whether he will put it all together one day (his career highs of 28 homers, 44 steals and a .300 BA sure would look good in the same season). It just won’t be in Tampa Bay.

The Skinny: We wonder how many people will even recall this name at all. Gruler last pitched in professional baseball in 2006, but it was his quick velocity jump that made the Reds so excited when they spent the third overall pick on him in ’02. The 6’3”, 200-pound Gruler touched as high as 97 mph with his fastball, and the Reds stretched to get him, giving him a $2.5 million signing bonus.

Strengths: Gruler upped his velocity about 10 mph in his senior year, complimenting his fastball with a 12-to-6 curve and smooth delivery.

Weaknesses: Rotator cuff surgery was the beginning of the end for Gruler, and he never made it out of Class-A.

Final Analysis: Gruler was a monumental bust all things considered, as the Reds really stretched here, given that he was projected to go anywhere from three to 20.

The Skinny: Loewen was a towering (6’6″, 220) can’t miss southpaw, but he didn’t sign initially, playing one season with Chipola College before finally penning a $4.02 million, Major League contract with the O’s. At No. 4, he was the highest-drafted Canadian player at the time, but ended up being converted to an outfielder. Loewen had a brief cup of a coffee with the Blue Jays in 2011, but his big-league career has been a flop so far. His numbers so far: .188 BA, one homer, four RBI as a hitter, and 8-8 with a 5.38 ERA in 35 games as a pitcher in three seasons with the Orioles from 2006-08. Last week, the Phillies signed him to a minor league deal and he’s currently toiling at Extended Spring Training, so the dream is not entirely dead, but the pulse is faint.

Strengths: Loewen’s mound presence was aided by his mid-90s fastball and big, slow hook. He always had smooth mechanics, which scouts figured would make his transition to the outfield a simple one.

Weaknesses: Loewen’s changeup and secondary pitches never really developed, and injuries starting beating him up early. A stress fracture in his elbow was the big blow, and control issues really hampered him, as evidenced by his dismal walk rate (5.8 BB/9).

Final Analysis: Loewen was one in a long line of draft failures in the late ’90s and early 2000s by the Orioles. He was a player stocked with talent but either poorly developed or not mentally ready to handle the challenges of being a Major Leaguer. Now 30, Loewen’s chances of getting back to the bigs are pretty slim.

The Skinny: If nothing else, Everts has the distinction of being teammates with Tracy McGrady… but only because T-Mac is now pitching for the Atlantic League’s Sugar Land Skeeters. Everts never reached the big leagues, but the 6’2”, 170-pounder was a dual-threat, a shortstop deemed almost as good as B.J. Upton that also featured a 93 mph fastball on the mound. But the injury bug kept his career from ever taking shape.

Strengths: Everts had great defensive skills, including the arm that possessed a 92-93 mph fastball and a fluent delivery. Tall, slender and athletic, he was highly touted coming out of Cypress Falls High in Houston.

Weaknesses: Everts’s bat came into question, which meant pitching was his path, but it didn’t turn out to be a path to glory. To his credit, he’s still playing baseball, but not where he envisioned.

Final Analysis: The Expos (now Nationals) waved goodbye to Everts from their organization after 2009 before things finally turned around for them, and he concluded his minor league career at 46-48 with an even 4.00 ERA. He wasn’t completely hopeless like Gruler, but a Top five pick not cracking the bigs is nothing short of a colossal disappointment, especially after a shift to the bullpen didn’t help to expedite his development.

Now it’s your turn. Let us know in the comments below what you thought of the top five picks of the 2002 MLB Draft.

Crave more in-depth Fantasy analysis? Then join us every Thursday at 9 p.m. EST for RotoRob’s Fantasy Baseball Weekly Podcast on Blogtalkradio as we entertain and edify you for an hour or more each week. Tune in here.

By Michael Seff
Tags: Pittsburgh Pirates
This entry was posted on Saturday, April 26th, 2014 at 5:34 pm and is filed under BASEBALL, Draft report, Michael Seff. You can follow any responses to this entry through the RSS 2.0 feed. You can skip to the end and leave a response. Pinging is currently not allowed.