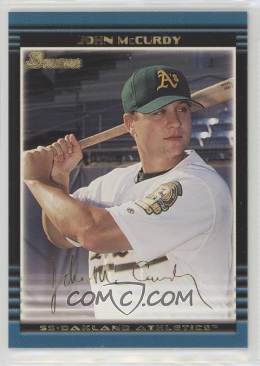 John McCurdy did not justify his draft spot. (COMC.com)

It’s time to get back into our 2002 MLB draft deep dive with Part Six. We’re getting to the stage now where the pickings are getting thinner, so as we wrap up the official first round (not including the supplemental picks), this will be our final pick-by-pick review. From here on out, we’ll cherry pick good and bad picks from the 2002 MLB Draft.

Today, we examine the final five picks of the first round, and we’ll warn you in advance — the pickings were slim here as there were some top prospects that simply failed to live up to the advance billing.

Without further ado, a closer examination of picks 26-30 from the 2002 MLB Draft.

Part of the infamous Moneyball draft, McCurdy was a power hitting shortstop for the University of Maryland-College Park, but couldn’t hit professional pitchers, so he lasted less than five years in the A’s organization before getting released.

He seemed to have power, but benefited from playing in a very cozy home park in college, so that was quickly discovered to be a mirage once he turned pro.

McCurdy only possessed average speed, so once his “power” was off the table and it became clear he did not have a good handle on the strike zone, things spiraled downwards quickly.

Well, he did bag a $1.375 million signing bonus, but really struggled to provide any return on the A’s investment as he only managed to reach Double-A before being released in 2007 and ending his career having never spent a day as a major leaguer. An OPS of under 700 during McCurdy’s time at Class-A spoke volumes. Clearly, he should not have been a first round pick, but — spoiler alert — he wasn’t exactly massively outshined by anyone else near the end of the first round draft in 2002. Still, we’ve been searching for McCurdy since 2014.

It’s hard to assess Santos given that he was a shortstop from of a baseball-producing high school, and two years later, he was one of the game’s top prospects (top five by 2004). But after stalling at Triple-A, he ultimately wound up converting into a relief pitcher, spending one season as a full-time closer.

Santos had a hell of an arm as an infield prospect, but after he switched to pitching, his four-seam fastball (98 mph)-slider combination was among the best in the biz. In fact, no White Sox minor leaguer at the time could rival his heater. Santos was also armed with a changeup that periodically was a great weapon for him. He had closer stuff, that’s for certain. As a hitter, Santos had power, winning the Eastern League Home Run Derby in 2007, but it never really translated into the higher levels or bigs.

Durability was a concern when he moved to pitching as he had never had a chance to rack up innings previously. The other issue with Santos as a reliever is he was too high strung for a position that usually demands a calm demeanour. Towards the end of his career, he dealt with command issues.

Because of the position switch and the fact Santos was dealt away to Toronto in 2005, it’s hard to gauge whether the D-Backs’ got much for their original $1.4 million signing bonus investment. Packaged up with Troy Glaus, Santos brought back a return of righty Miguel Batista (who won 11 games while recording a 2.3 WAR for Arizona in 2006 before leaving as a free agent) and second baseman Orlando Hudson (who recorded 10.5 WAR over three seasons with the Snakes before leaving as a free agent). (As an aside, it’s interesting to note that Santos ultimately helped the Jays land Nate Pearson.)

After getting dealt to Toronto, Santos spent most of his time at Triple-A (struggles prompted a demotion to Double-A in 2007) before being claimed on waivers by Minnesota in 2008. The following season, he was signed to a minor league by the Pale Hose, who (after trading him to the Giants and then reacquiring him) ultimately turned him into a reliever — one who, after some rocky times, showed promise as a rookie in 2011, and then saved 30 games the next year before a shoulder injury derailed him in 2012. (Check out his White Sox intro in the video below.) Over his final four seasons, he bounced around, experiencing some success (1.75 ERA in 29 games in 2013) and some hard times (2.19 WHIP in 26 games in 2014) before packing it in 2015 after undergoing Tommy John surgery. All told, Santos went 0-for-27 as a hitter, but managed to accumulate a WAR of 2.0 over 194 appearances as a pitcher, chalking up an ERA just under 4.00 with 39 career saves. As per Baseball-Reference, he wound up being most similar to Matt Bowman, who posted a few decent seasons with the Cards and Reds, but is clearly no one’s idea of a player you want to model your game after. In the end, Santos was not a great pick at No. 27, but given his work as a reliever, we can justify him going with the final pick in the first round.

Picked out of the same high school that produced David Cone, Mayberry Jr. did not sign, opting to attend Stanford. It’s a move that paid off for Mayberry, as he was taken 19th overall by Texas in 2005. As compensation for him not signing, Seattle was given pick No. 37 in 2003, taking outfielder Adam Jones — which worked out very well for the Mariners.

Grigsby was supposed to be the next great Texas-born pitcher, so how perfect was it that Houston plucked him out of Northeast Texas Community College? Unfortunately, after investing $1.125 million into the righty, the Astros wound up having to chalk this up as yet another failed high pick in a decade filled with them.

Grigsby had talent and his stuff was unquestionably good. He was armed with a big-time fastball and wonderful slider, had a mound presence and high baseball IQ in terms of knowing which pitches to throw at any given time.

He really scuffled with his control, but it was his demons that ultimately were his undoing. Grigsby had dealt with depression since his mother died suddenly in 1999 and, unfortunately, baseball didn’t help matters, it only seemed to exacerbate the issue.

The deck always seemed stacked against him because of his struggles with depression, but he actually looked like he was figuring things out with a nice stretch in July 2004 at Class-A; unfortunately, it was short-lived. After the 2004 season, Grigsby asked his agent to call the Astros and tell them he wasn’t reporting to Spring Training, and he was ultimately placed on the restricted list in November 2005. Grigsby pitched professionally again. All told, he won 14 games with a 4.76 ERA and 1.54 WHIP over 54 games (50 starts) and 249 1/3 innings in the minors, never advancing beyond Class-A or recording an ERA below 4.75. It’s clear that Grigsby had no business being a first rounder, but it stings even more when you consider that the Cards could have drafted the likes of Joey Votto, Jon Lester or Brian McCann with this pick.

Another member of the Moneyball draft, Fritz was taken out of Cal State Fresno by Oakland with the compensation pick it received from St. Louis thanks to the Cards signing Jason Isringhausen. Fritz signed for $1.2 million given his big time potential, but after hurting his shoulder in 2003, he never fully recovered, although as late as 2006, he still seemed to have promise (3.30 ERA over 12 starts at Double-A).

He was obviously a great athlete as he also caught in college and in the Alaska League (where he was ranked as the second best prospect in 2001), but scouts agreed his path to the bigs was as a pitcher. Fritz had good movement on his fastball and possessed strong offerings in his changeup and breaking ball. Coaches raved about his pitching know-how and his unshakable demeanour.

Injuries were his undoing as things went downhill after the shoulder woe. With a career K/9 of 6.26, Fritz really struggled to throw the ball by professional hitters, and with over four walks per nine innings at Triple-A, command was a massive issue.

He remained in the A’s organization until 2007, when Detroit grabbed him in the Rule 5 Draft. By August 2008, Fritz was pitching in Indy ball, where he spent three years between a couple of unsuccessful looks with MLB teams. By 2013, he was done as a player, but two years later he became a minor league coach in the Padre organization, moving up to pitching coach in the majors for 2021 and now as bullpen coach. In seven minor league seasons, Fritz went 34-41 over 124 starts and four relief appearances with a 5.15 ERA and 1.51 WHIP. He topped out at Triple-A, never reaching the major leagues.

Late, great American jazz singing legend Billie Holiday was active from 1930 until her untimely death in 1959. In 2015, The Centennial Collection was released to commemorate her 100th birthday. From this effort comes “What a Little Moonlight Can Do,” featuring Teddy Wilson and his Orchestra, who also performed with Ella Fitzgerald.

By RotoRob
This entry was posted on Thursday, April 7th, 2022 at 8:45 pm and is filed under BASEBALL, Draft report, RotoRob. You can follow any responses to this entry through the RSS 2.0 feed. Both comments and pings are currently closed.