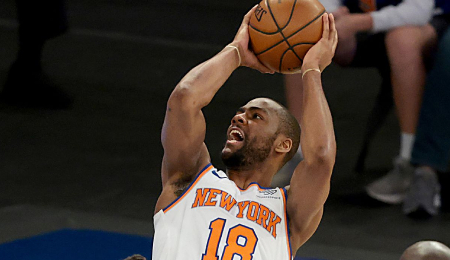 Welcome back to another week of Fantasy basketball. With All-Star Weekend in the rear view mirror, we’re into the unofficial second half, so keep your foot on the gas and scour that waiver wire.

This week, LeBron James shook off a knee woe and was able to suit up on Friday, emerging with a double-double; Nikola Jokic has gone over two weeks since his last triple-double; and Ben Simmons‘ debut with the Nets still seems a ways off.

Alec Burks, PG, New York Knicks (ESPN: 12.3 per cent; CBS: 44 per cent): With news that Kemba Walker is officially done for the season and Derrick Rose has undergone a procedure on his ankle, Burks’ role has been solidified for the foreseeable future. Just two seasons ago Burks was a steal off the wire, but last season was mostly relegated to a bench role, and this season has not shot as well from downtown. Yes, he turned in a stinker on Wednesday (before bouncing back with a near double-double and two treys on Friday — see video below), and hasn’t been sinking as many buckets this month, but he now owns the keys to the offense, so makes for an intriguing option. Best of all, Burks is also capable of handling minutes at the two given his size and athletic ability.

Jevon Carter, PG, Milwaukee Bucks (ESPN: 0.1 per cent; CBS: unowned): Carter signed with the Bucks this week, and makes for an intriguing short-term option in deep leagues given how beat up Milwaukee’s backcourt currently is. Hey, if nothing else, the Bucks are loading up on ex-Nets, having signed DeAndre’ Bembry last week. Carter is a solid defensive player, but has never shown much on offense. Let’s see what he can do if given a 20 MPG role.

Jaxson Hayes, C/PF, New Orleans Pelicans (ESPN: 6.1 per cent; CBS: 35 per cent): Hayes has become more attractive as it’s gotten clear that Zion Williamson is probably not coming back this season. Before a quiet game on Friday, Hayes had scored at least 13 points in three straight games, has really been sinking more buckets the last couple of months, and has gotten a bit more of a chance to start this season — especially lately. But even when he hasn’t played a ton of minutes, he’s been capable of producing (like on Friday, when he flirted with a double-double despite playing just 17 minutes), so give him a look in both redraft and DFS formats.

Goran Dragic, PG, Brooklyn Nets (ESPN: 4 per cent; CBS: 19 per cent): Way back in 2017-18 we noted that Dragic’s FG percentage was in free fall, and other than a slight increase in 2019-20, that trend has continued. However, he now has an opportunity — once he’s back to game conditioning strength — to provide some value with the Nets, who recently signed him. Dragic is expected to be ready to play at some point over the next three games (possibly even Saturday), and will be worth a short-term add with Simmons still not ready to compete.

Lonnie Walker IV, SG/SF, San Antonio Spurs (ESPN: 3.4 per cent; CBS: 19 per cent): We last pimped Walker in early May, and it wound up being a good pick as he logged more touches that month. This season, his shooting has regressed again, but he saw more PT with Josh Richardson (shoulder) out on Friday. Walker is currently rolling, having scored at least 17 in four straight games, so give him a look.

Aaron Wiggins, SG, Oklahoma City Thunder (ESPN: 0.3 per cent; CBS: 2 per cent): Wiggins hasn’t done much, but with Luguentz Dort and Kenrich Williams both out, he will continue to get PT. Wiggins did flirt with a double-double on Thursday and again came close to double-digit points on Friday, but he hasn’t been getting to the line much and doesn’t rebound a ton. This is a short-term add for very deep formats only.

Deni Avdija, SF, Washington Wizards (ESPN: 6.3 per cent; CBS: 41 per cent): We pegged Avdija as a dark horse ROY candidate last season, but that didn’t exactly pan out. Well, he’s looking pretty good now, having rhymed off six straight double-digit scoring efforts and is clearly being more aggressive about looking for his shot. Avdija has sunk more treys lately, and his A/40 is up significantly this season. We’re expecting a big second half here.

Patrick Beverley, PG, Minnesota Timberwolves (ESPN: 20.8 per cent; CBS: 50 per cent): We recommended Beverley just over a year ago, and it wasn’t our best call as his PT waned over the course of the season. But right now — despite a stinker Friday thanks to foul trouble — he’s playing well, having scored double digit points in all but two games this month, while shooting better from beyond the arc. Overall, his work from downtown has regressed, but he’s picked it up now and after the T-Wolves beat Memphis on Thursday, Beverley proved he’s among the league leaders in trash talking.

Beck David Hansen, better known simply as Beck, is an American alt rock musician that’s been active since 1988. In the early ’90s, he enjoyed his breakout with the single “Loser.”

By RotoRob
This entry was posted on Saturday, February 26th, 2022 at 11:54 am and is filed under BASKETBALL, RotoRob, The Wire Troll. You can follow any responses to this entry through the RSS 2.0 feed. Both comments and pings are currently closed.