The Wire Troll: Scott Laughton Stepping Up for Flyers 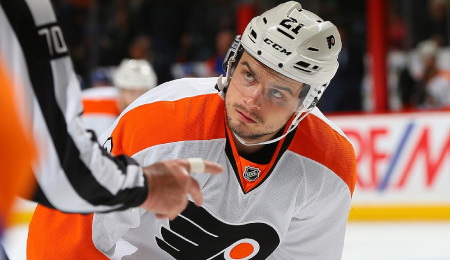 Scott Laughton’s larger role in guaranteed for the rest of the season. (NHL.com)

Welcome back to another week of Fantasy hockey. The season is nearly two-thirds done, so you better get a move on and milk that wire while you can.

Scott Laughton, C, Philadelphia Flyers (ESPN: 2.3 per cent; CBS: 5 per cent): Laughton last caught our attention early on in the 2019-20 season when we noted how well he was playing after returning to the lineup from a broken finger. Sure enough, he enjoyed a career-best performance that season, and after some regression in 2020-21, he’s taken his game to a new level this season, emerging as a bright spot amidst a dark campaign in Philly. Laughton’s six-game point streak was snapped on Thursday, but it was good enough to lift him into fourth place in scoring on this scuffling Flyer team. Potentially Philly’s next captain (assuming Claude Giroux gets dealt at the deadline), Laughton plays with an edge, tends be among the team’s hardest workers and seems to be a late bloomer, offensively speaking. Best of all, his bigger role has been solidified now that Sean Couturier has undergone season-ending back surgery (with Kevin Hayes packing it in for the season likely not far behind). Laughton is not a stranger to dropping his glove (see video below), so he can help your team in that department, too.

Evgenii Dadonov, RW, Vegas Golden Knights (ESPN: 48.8 per cent; CBS: 29 per cent): Dadanov enjoyed a solid return to the NHL in 2017-18 after five years in the KHL, and he was even better the following season before regressing for the subsequent two seasons. This season, however, he’s bounced back a bit, and he’s been elevated to the top line with Mark Stone on LTIR. Dadanov remains in a slump, production wise, but makes for a nice sleeper pick given his talent and the opportunity he’s been given. Don’t forget that this is a dude that had three straight seasons of at least 25 goals with the Panthers.

Jeff Skinner, LW, Buffalo Sabres (ESPN: 15.7 per cent; CBS: 42 per cent): Skinner scored 40 goals in his Buffalo debut in 2018-19, but fell on hard times over the next two seasons. Well, he’s back now, scoring four goals on Sunday to reach the 20 mark for the eighth time in his career. Skinner has really gelled with linemates Alex Tuch and Tage Thompson, so he definitely deserves your attention again.

Kyle Palmieri, RW, New York Islanders (ESPN: 13.4 per cent; CBS: 22 per cent): Early on in 2019-20, we thought Palmieri was headed towards a career season, and while he did score at a 31-goal pace, it wasn’t necessarily the new level we had anticipated. Well, he’s been dreadful since then, but is finally showing signs of life, potting a pair of goals on Tuesday. Palmieri has been promoted to the top line with Josh Bailey out day to day, and so far, so good. If Palmieri’s slump is truly over, it’s a great time to grab him.

Laurent Brossoit, G, Vegas Golden Knights (ESPN: 7.7 per cent; CBS: 22 per cent): We last pimped Brossoit at the very beginning of the 2019-20 season, but he wound up having a poor campaign. He was much better last season, and while he hasn’t been quite as sharp with Vegas so far, before Friday he had been spectacular this month and is in line for more PT with Robin Lehner out. Unfortunately, the Golden Knights didn’t offer Brossoit any goal support on Wednesday, but if you need short-term goaltender help, grab him.

Dmitry Kulikov, D, Minnesota Wild (ESPN: 0.5 per cent; CBS: 7 per cent): It’s been almost a half dozen years since we last recommended Kulikov, but he’s having a nice comeback season in Minnesota, and has even more responsibility right now with Matt Dumba (LBI) out and expected to miss the upcoming four-game road trip. On Wednesday, Kulikov even tickled the twine for the first time in 19 games.

Noel Acciari, C, Florida Panthers (ESPN: 0.2 per cent; CBS: 1 per cent): Acciari’s breakout in 2019-20 grabbed our attention, but he struggled last season and had missed all of this season with injury until Friday. Take a chance in deeper formats and expect a goodly amount of hits and perhaps some surprise offense.

Kailer Yamamoto, RW, Edmonton Oilers (ESPN: 6.2 per cent; CBS: 20 per cent): Yamamoto has only been seeing 26 seconds of PP time per game, but that’s likely to rise now that Jesse Puljujarvi will be sidelined for about four weeks due to a lower-body injury.

Christopher Tanev, D, Calgary Flames (ESPN: 3 per cent; CBS: 16 per cent): Over his last four games, Tanev has potted a pair of goals and dished out five assists. Pick him up while he’s blazing!

Claude Antoine Marie François, better known as Claude Francois, released an eponymous album in 1963 and from this effort comes “Si J’avais Un Marteau (If I Had a Hammer).”

By RotoRob
This entry was posted on Saturday, February 19th, 2022 at 1:25 pm and is filed under HOCKEY, RotoRob, The Wire Troll. You can follow any responses to this entry through the RSS 2.0 feed. Both comments and pings are currently closed.