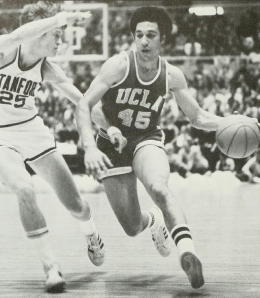 RotoRob recently sat down basketball legend Henry Bibby, who will soon be enshrined in the North Carolina Sports Hall of Fame.

To say this is a well-deserved honour seems like an understatement. The Franklinton, North Carolina-bred point guard helped lead UCLA to a three-peat in the early ’70s, becoming a first-team All-American while averaging 14.4 points as a collegian. Later on, Henry’s son Mike would also win an NCAA title, making the Bibbys one of a select few father-son duos to accomplish this feat.

After college, Henry Bibby embarked on a nine-year NBA career, earning a championship with the Knicks as a rookie. Later, he enjoyed his most productive seasons as a 76er in the late ’70s, playing alongside Julius Irving (check out Bibby making a bucket off a feed from Dr. J in the video below), Maurice Cheeks and Daryl Dawkins, among others. After his playing days, Bibby became a celebrated coach at both the collegiate and professional ranks. He’s still helping develop basketball talent.

We had an engaging talk with Bibby, covering a wide range of topics, including:

Listen to the entire interview below.

In honour of Bibby and the state of North Carolina, today we picked a tune by Durham, North Carolina singer Betty Davis, who sadly passed away earlier this month. Here’s the title track from her second album, They Say I’m Different, released in 1974.

By RotoRob
This entry was posted on Monday, February 28th, 2022 at 2:46 pm and is filed under BASKETBALL, Interview, RotoRob. You can follow any responses to this entry through the RSS 2.0 feed. Both comments and pings are currently closed.