The Wire Troll: Mike James Should Rise in Phoenix 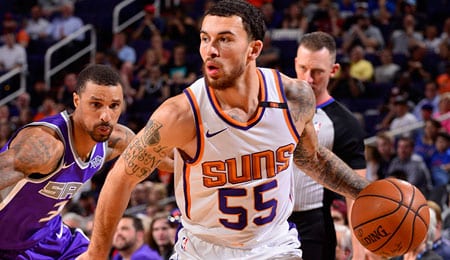 Mike James is a nice flier with Devin Booker out. (NBA.com)

Welcome back to another week of Fantasy basketball. We’re into December now, and currently in the midst of the Mexico global games. It’s time for you to emulate Speedy Gonzalez and hurry to the waiver wire to fix your holes. Fortunately, we’re here to help guide you.

This week, Derrick Rose admitted he may need surgery on his ankle as his first season in Cleveland continues to be a nightmare; Kawhi Leonard (quad) will not make his season debut on Saturday, but the hope is he’ll now return on Tuesday; and Chris Bosh’s mom was one of the people questioned by police after a Dallas drug raid on Friday.

Mike James, PG, Phoenix Suns (ESPN: 8.5 per cent; CBS: 39 per cent): James may have never been drafted, but that didn’t stop him from this week becoming the first player in NBA history to have a two-way contract converted into a regular deal without ever getting farmed out to the NBA G League. Now, with Devin Booker out, there’s a chance James sees more PT and gets to run the Sun attack a bit. James’s PT is down lately, but earlier this season he was seeing enough to be useful. We expect that to happen again now for the rookie, and he showed flashes of his offensive ability against Boston last week (see video below). After playing overseas for a few years, he’s brought Phoenix some bench scoring from the PG spot (and has made plenty of starts already, too), and has done a good job running the team’s plays so far. Consider him a nice speculative pickup in 14-team leagues.

Richaun Holmes, PF, Philadelphia 76ers (ESPN: 0.8 per cent; CBS: 9 per cent): Holmes has seen sporadic PT and missed some time with inury, but when he plays, he performs. On Thursday, for instance, he poured in 13 points with six boards and two steals in 22 minutes. On Saturday, Holmes could be an interesting DFS option as Philly will be without Joel Embiid, T.J. McConnell and (probably) Daric Sario. Holmes should start and see plenty of time at the four, possibly 25 to 30 minutes, which should translate into a big line. Flier alert.

Marvin Williams, PF, Charlotte Hornets (ESPN: 14.2 per cent; CBS: 42 per cent): This is a dude that is seemingly always on the periphery of Fantasy value, making for a good waiver wire pickup at various times during the season. On Friday, Williams showed his upside, with 17 points, nine rebounds, three treys, one assist, one steal and one block. His three-point shooting is a chief allure, but has been a bit down lately, so it was great to see him go off. Williams is seeing more minutes lately, and while hasn’t been jacking up quite as many treys, he remains an elite FT shooter. If he starts hoisting treys at the same rate as he did in the last two seasons, his value will rise significantly. The big issue for owners here is Williams’s lack of consistency. That’s frustrating when you see him throw up periodic sweet lines like on Friday and the previous Friday (16 points on 6-of-7 shooting, with six boards, two steals and a block).

By RotoRob
Tags: Devin Booker, Mike James, Phoenix Suns
This entry was posted on Saturday, December 9th, 2017 at 6:23 pm and is filed under BASKETBALL, RotoRob, The Wire Troll. You can follow any responses to this entry through the RSS 2.0 feed. Both comments and pings are currently closed.