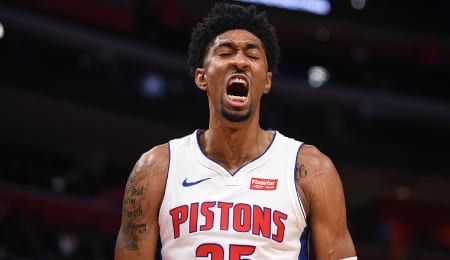 Christian Wood had plenty to shout about this season. (Tim Fuller-USA Today Sports)

Based on the NBA’s recently announced 22-team return to play plan, it’s become obvious at last that the 2019-20 Fantasy basketball season is now finito, so here’s hoping you had a great campaign and that our waiver wire picks helped guide you to a championship.

Oh sure, we had plenty of misses among our picks, and because of the bi-weekly nature of our column it means that some hot free agents get scooped up days before we can tout them. But the fact is that if you managed to wind up with, say, two or three of these guys on your team, chances are you were a pretty happy camper this season.

Norman Powell, SG/SF, Toronto Raptors (Week Three): We first recommended Powell in Week Three, but the message wasn’t sinking in, so we gave him another shout out in Week Seven. Yes, he missed some time before Christmas when the Raptors were besieged by injuries, but in the 44 games he did play, he absolutely obliterated all his career highs. We love that Powell got to the line more often (and was more successful when he did get freebies) and that he did better work on the offensive glass. But it was the offense (16.4 PPG) that really drove him to becoming the waiver wire steal of the season. And depending on how things play out in the Raptors’ expensive backcourt, Powell could have an even bigger role next season.

Christian Wood, PF, Detroit Pistons (Week 11): Wood was likely the top big available on the wire this season. One of the better surprises in Detroit this season, he wasn’t a great source of assists or steals, but what he was able to provide in points, boards and blocks was a huge help. Wood was the third NBA player to test positive for the coronavirus, but was cleared from that months ago, and looking forward, it’s not unreasonable to think he’s a future all-star (see video below to get a sense of how this dude can throw it down).

Daniel Theis, C/PF, Boston Celtics (Week One): Theis was the biggest home run we hit in the season’s opening week, and we liked him enough to recommend him again in Week Seven because people still hadn’t fully clued in that he was having a nice breakout. He’s gone from being a role player in his first two seasons to being a full-time starter this season, one that’s on the floor at crunch time. Theis continued to improve his overall accuracy, and while he’ll need to learn to cut down on his fouls and perhaps improve his outside shot a bit to take it to the next level, we’re really impressed with the strides he made this season.

Malik Beasley, SG, Denver Nuggets/Minnesota Timberwolves (Week 13): Our best mid-season pick, Beasley wasn’t exactly tearing it up playing exclusively off the bench in Denver, but after a late-season four-team trade sent him Minnesota, he took off. He made it rain treys for the T-Wolves and started putting up more points on the line en route to averaging nearly 21 PPG in 14 games after the deal. Minnesota made a ton of moves at the deadline and paid handsomely for Beasley, but he looks like he may be a long-term building block now.

Kendrick Nunn, SG, Miami Heat (Week One): Nunn is one we touted right off the bat, and the rookie had a superb debut effort, clearly establishing himself as the PG of the future in South Beach. Even in his first season, he proved he was a consistent source of offense, but once he learns how to get to the charity stripe more often, his game will really take off.

Duncan Robinson, SF, Miami Heat (Week Five): Another youngster on the Heat we identified fairly early in the season was Robinson, who moved into a starting role and enjoyed a stellar sophomore effort. His PT was way up, and he responded with some nice offense and tons of three-pointers, but not much else. Word that Miami could court Victor Oladipo this offseason would be bad news for Robinson’s Fantasy value, but the fact Robinson’s shooting touch really improved in the second half (including a 52.5 per cent mark in March), suggests there is more upside here.

Elfrid Payton, PG, New York Knicks (Week One): Payton wound up having a decent season with the Knicks, but as a journeyman he’s no one’s idea of a long-term solution at PG, so his job will be in doubt every season. He was healthier last season, but still dealt with injuries early on, and didn’t wind up taking as many treys. Payton also struggled from the line, but if you needed dimes, he was a great source of that all season long. Thanks to a few hot spurts, he did show progress from the field, but is still well below what he showed in his final season in Orlando.

Alec Burks, PG/SG, Golden State Warriors/Philadelphia 76ers (Week Three): Burks ranked second on the Warriors in usage percentage before getting dealt to Philly, where he had a much smaller role coming exclusively off the bench. Still, at 15.1 PPG, he still enjoyed a career season, easily ranking as a top 100 player for the first time.

American rapper Busta Rhymes (born as Trevor George Smith Jr.) has been in the game since 1990. In 1997, he released his second album, When Disaster Strikes…, and the second single was “Dangerous,” a track that helped make this album a success, going to No. 1 on the Top R&B Albums chart.

Now it’s your turn. Let us know in the comments below which Fantasy basketball waiver wire picks really helped your team this season.

By RotoRob
This entry was posted on Friday, June 12th, 2020 at 9:59 am and is filed under BASKETBALL, RotoRob, The Wire Troll. You can follow any responses to this entry through the RSS 2.0 feed. You can skip to the end and leave a response. Pinging is currently not allowed.