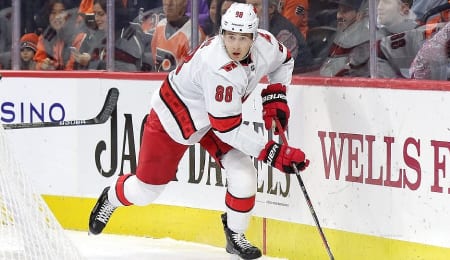 The 2021 NHL is pretty much in the books, except for the Vancouver Canucks wrapping up all that time they missed during their Covid shutdown. So that means it’s time to see how our Fantasy hockey waiver wire recommendations panned out this season.

Employing the wire can provide value in many ways. Sometimes, it offers a temporary fix to an injury issue or it’s simply a case of jumping on a player delivering short-term value. But when you pick up a player and he sticks on your team for the entire season — or even for the lion’s share — and he contributes throughout, that is the true definition of waiver wire gold.

Naturally, we had plenty of misses among our picks, and because of the (mostly) bi-weekly nature of our column, it means that some hot free agents got scooped up days before we could tout them. But the fact is that if you managed to wind up with, say, two or three of these guys on your team, you were probably a pretty happy camper this season.

Martin Necas, C, Carolina Hurricanes (Week Seven): Necas was the rare mid-season pick who just exploded in value. Not recommended until the end of February after Teuvo Teravainen suffered a concussion, Necas proceeded to pay instant dividends, earning time on the second power play unit as a result. All Necas did in March was pile up 17 points in 14 games while going +10. And while he cooled in April, he produced well in May. The fact that he managed five more points this season — in 11 fewer games than last season — really spoke to his breakout. Hell, Necas even added the first two short-handed goals of his career (of course, he had a little help from the linesman on the second — see video below). This superb skating youngster has a bright future, so don’t sleep on him in next season’s drafts.

Conor Garland, RW, Arizona Coyotes (Week One): Garland was the gem of our season opening picks and when we recommended him we wrote that he was ready to pick things up where he left off last season as the team’s leading scorer before getting hurt. And then all he did was average nearly a point per game in January before actually turning the trick in February. Garland slowed down a bit in March and April, but came up huge in May with seven points in just four games. After matching his point total from last season in 19 fewer games, it’s no surprise he was selected to represent the U.S. at the upcoming World Hockey Championship. What was surprising is that Garland managed to enjoy such a solid season even though he wound up playing on the second line after most had projected him to be a first liner this season.

Jack Campbell, G, Toronto Maple Leafs (Week 11): We didn’t recommend Campbell until near the end of March, but he became the best waiver wire goalie pickup of the season. When we pimped him, we talked about the chance he had to show if his great numbers could translate into a large sample size with starter Frederik Andersen hurt. Well, as great as Campbell was in March (albeit, in just four games played), he saw a ton of action in April (10 games) and racked up seven wins with solid supporting numbers, although obviously not nearly as dominant as what he did in the previous month. He’s been even better in May so far. It’s hard to believe that Campbell was Dallas’ first round pick way back in 2010 as he sure took a long time to break through, but with career bests in wins (which included setting a new NHL record for consecutive wins by a goalie to start a season) and GAA this season, he’s really proved he’s worthy of getting a crack at a No. 1 goalie gig.

Joel Farabee, LW, Philadelphia Flyers (Week One): Farabee was another season-opener pick we nailed, as suggested he could put up 30 or more points in his sophomore season. Well, he often led the way for a disappointing Flyer team, and actually finished as the team’s only 20-goal man, exceeded our expectations by flirting with 40 points. Farabee had nearly a point per game in January and over a PPG in February before slightly cooling in March and then hitting a wall in April. However, he shook off his slump and scored five goals with a pair of apples in six May games to obliterate his rookie numbers en route to being named Philadelphia’s most improved player. In a points only keeper format, Farabee can now be considered alongside young up and comers like Necas, Jason Robertson and Sam Bennett. The Flyers may have had a disappointing season, but apparently if the whole team trained like Farabee does, things might have been very different.

Jared McCann, C, Pittsburgh Penguins (Week 11): McCann was another late-season find as we pegged him with Evgeni Malkin out and he delivered, really picking things up after Jeff Carter arrived via trade (11 points in the final 14 games). After a strong March in which he averaged a point per game, McCann had a season-high 12 points in April and another four points in five May games. All told, the criminally underrated centre managed to come within three points of his career high set last season, despite appearing in 23 fewer games. McCann also tied his career-best in goals while shattering his personal best with a +17 rating. Best of all, the youngster has proved he can hang with the big boys on PP1, notching seven tallies with three apples on the man advantage. McCann is another player we have yet to see the best of.

Max Comtois, LW, Anaheim Ducks (Week Three): We pegged Comtois as an option at the end of January, suggesting he was poised for a breakout. Well, he really turned it on in February (nine points in 11 games) before slowing a bit in March and April, but finished strong with five points in five games in May. Breakout? Well, Comtois tripled his point total from last season, so you tell us. The fact he’s been selected to play for Team Canada at the Worlds is further evidence. Better yet, based on his expected goals above replacement and his actual SPAR, Comtois still has some major upside, so consider this 22-year-old a serious sleeper for next season.

Nils Hoglander, LW, Vancouver Canucks (Week One): While we pimped Hoglander right at the start of the season, it wasn’t enough, so we recommended him again in the season finale of the Wire Troll. The rookie suffered from some consistency issues month to month, but he’s finishing strong with six points in eight games so far this month. And with an average of 0.5 PPG, it’s hard to characterize this as anything but a successful debut for the 20-year-old.

Dustin Brown, RW, Los Angeles Kings (Week Five): When we recommended Brown less than a month into the season, we talked about how he had picked things up from where he left off last season. One of four Kings left from the two Stanley Cup championship teams, he proved us right by averaging almost a point per game in February. Brown slumped in March, but bounced back in April. He was quiet in May before an UBI ended his season five games early. Still, the veteran managed to match his goal total and come within four points of last season’s output — in 17 fewer games. Despite his rough and tumble style, Brown has generally been durable in his career, with a few exceptions here and there.

Composer Ornette Coleman was known as one of the founding fathers of free jazz (a form of jazz improv). Here’s another track off his album The Art of the Improvisers, which was assembled from recording sessions through 1959 to 1961. Here’s the disc’s closing track, “Brings Goodness.”

By RotoRob
This entry was posted on Saturday, May 15th, 2021 at 5:25 pm and is filed under HOCKEY, RotoRob, The Wire Troll. You can follow any responses to this entry through the RSS 2.0 feed. Both comments and pings are currently closed.