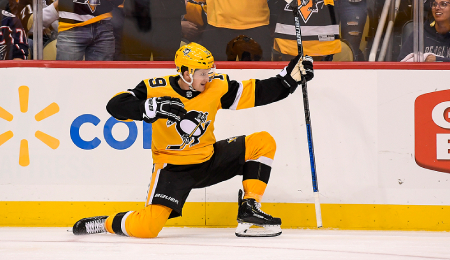 Jared McCann is thriving on the Penguins’ second line. (NHL.com)

Welcome back to another week of Fantasy hockey. We’re around three-fifths of the way through the season, so the home stretch is coming, as is the trade deadline — which can really alter Fantasy fortunes. Keep your eye on the wire.

This week, the NHL lost long-time St. Louis great Bob Plager; the Bruins got back in action from their Covid-forced pause; and Montreal will now be off through the weekend as it battles its own pandemic issues.

Jared McCann, C, Pittsburgh Penguins (ESPN: 4.2 per cent; CBS: 8 per cent): The last time we checked in on McCann he was hurt, but now — having just returned recently from another health woe — he’s in a position to take advantage of someone else’s injury, namely Evgeni Malkin, who is out week-to-week with an LBI. McCann sure looked good on Thursday, potting a pair of power play tallies (including the seeing eye laser in the video below), giving him points in back-to-back games. He’s averaging nearly a point per game in March, and is generally seeing an increase in PT lately, which is significant because his overall ice time this season is down. McCann is a dude that knows how to play a solid two-way game, so as long as Malkin is out, he’ll be a very nice asset.

Dustin Tokarski, G, Buffalo Sabres (ESPN: 0.2 per cent; CBS: unowned): It’s been almost six years since Tokarski last landed on the Fantasy radar and even then we weren’t bullish. However, thanks to injuries and trades, he suddenly finds himself as the last man left standing in the Buffalo crease, so if you’re super desperate for a starting goalie in a very deep league, this is your man. Tokarski has started back-to-back games for the Sabres, and he looked better on Thursday, so perhaps there’s hope. It’s been five years since he last played an NHL game before this run, so you’ve got to figure this is his final shot… so if nothing else, the incentive is there for him.

Yanni Gourde, LW, Tampa Bay Lightning (ESPN: 47.8 per cent; CBS: 43 per cent): When we last checked in on Gourde his downward trajectory had continued into the start of the 2019-20 season, and things didn’t really improve much the rest of the campaign. However, he’s bounced back in a big way this season and with a goal and an assist on Thursday, he’s now recorded points in five straight (5-2-7) making him a must grab. Gourde is averaging a point per game in March and is already halfway to his 2019-20 assist total — in 37 fewer games. He hasn’t been as good on faceoffs this season, but seems to be coming around in that regard, too. Ride Gourde while he’s scorching.

Jesper Bratt, LW, New Jersey Devils (ESPN: 6.5 per cent; CBS: 14 per cent): It’s been a couple of years since we last noticed Bratt, but his current hot streak has us intrigued as he’s put up points in six straight games (2-4-6) to move into a tie for third in team scoring. He’s gotten better as the season has progressed and could threaten his career best in points — despite the reduced schedule. Bratt is a fine second-half Fantasy option and a real nice DFS play right now.

Jack Campbell, G, Toronto Maple Leafs (ESPN: 35.3 per cent; CBS: 46 per cent): Last February we recommended Campbell and it was a good call as he was stellar (2.40 GAA) in February before cooling in March prior to the pause. Well, we’re giving him more love now with starter Frederik Andersen struggling and now hurt. So Campbell has a real chance now to prove his fantastic numbers can translate into a larger sample size. He hasn’t seen much action this season (missing time himself back in late-January with a leg woe), but makes for a great pickup while Andersen is sidelined.

Brendan Smith, D, New York Rangers (ESPN: 0.2 per cent; CBS: 1 per cent): Smith’s tenure with the Rangers has been spotty; hell, they even waived him on his birthday three years ago. But he’s willing to drop the gloves, tussling with Philly’s Nicolas Aube-Kubel on Thursday in a game Smith also went +3. That leaves Smith with a career-best +5 right now, so if your league still tracks that kind of thing, he may have value in a deep format. And while it may be extremely luck-based he’s enjoying career bests in WAR, GAR and SPAR.

Ville Husso, G, St. Louis Blues (ESPN: 2.8 per cent; CBS: 11 per cent): A big goalie with a good track record in Europe, Husso has been inconsistent with his peripherals, but his record deserves some attention in a deeper format or if you’re struggling to find backup goalie wins.

Nic Dowd, C, Washington Capitals (ESPN: 2.4 per cent; CBS: 1 per cent): With Lars Eller (LBI) out, Dowd has seen a nice bump in PT and has been doing a great job on faceoffs (11-for-17 on Friday). The Caps really struck gold here when they signed the former King/Canuck as he’s improved his goal scoring in each season since landing in Washington, making him worthy of attention in very deep formats.

Eeli Tolvanen, RW, Nashville Predators (ESPN: 18.6 per cent; CBS: 29 per cent): Tolvanen is giving Preds fans something to get excited about as he’s risen to fourth in team scoring despite only playing 25 games so far. His role is destined to grow once Nashville strips down its roster at the trade deadline, so you might want to jump on him now.

We can’t get enough of Azymuth‘s Light as a Feather album, so here’s the disc’s classic “Jazz Carnival.”

By RotoRob
This entry was posted on Saturday, March 27th, 2021 at 2:41 pm and is filed under HOCKEY, RotoRob, The Wire Troll. You can follow any responses to this entry through the RSS 2.0 feed. Both comments and pings are currently closed.