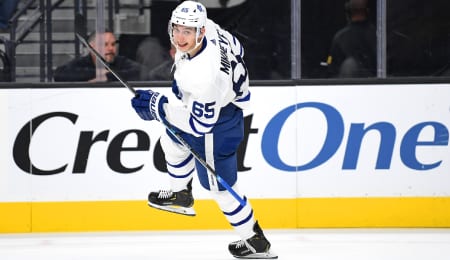 Welcome back to another week of Fantasy hockey. It’s Valentine’s Day weekend, so be sure to spend some time with your significant other(s), but don’t forget to take a few minutes to pilfer the waiver wire.

This week, Mikko Koivu announced that he’s retiring and putting an end to his 16-year career; Patrik Laine is already wearing out his welcome in Columbus, getting benched on Monday; and after a decent start to the season, Vancouver is in free fall with six straight losses.

Ilya Mikheyev, RW, Toronto Maple Leafs (ESPN: 2 per cent; CBS: 14 per cent): With Wayne Simmonds out six weeks with a broken wrist, Mikheyev has seen a boost in minutes and is seeing a bit of PP time. Despite his frustrating start, Mikheyev has played well, and it’s now starting to manifest itself in production with points in back-to-back games, including the game-winning goal on Wednesday (see video below). Could this be an instance when the flood gates open? We recommended him in mid-October last season and the Russian winger showed great promise as a rookie — especially with his playmaking skills — so he’s worth grabbing to see if this extra ice time helps get him going. There’s no doubt Mikheyev has the skill top play among the top six, so don’t sleep on him.

Joe Thornton, C, Toronto Maple Leafs (ESPN: 7.3 per cent; CBS: 27 per cent): Looking for a nice stash candidate? Then it’s time to grab Thornton as he’s expected to return from his rib injury in about a week. He stayed healthy last season, so hopefully this is an outlier (although he also got hurt early on two seasons ago) and he’ll be productive for the remainder of the schedule. If Jumbo Joe gets slotted back in the top six upon his return, he’ll prove a very astute pickup, so don’t be afraid to use a roster spot on the veteran.

Dustin Brown, RW, Los Angeles Kings (ESPN: 39 per cent; CBS: 35 per cent): Last March, we recommended Brown as a candidate for a strong finish. Well, Covid put a quick end to his hot play, but this season he’s picked up right where he left off, recording four points in the last two games and nearly a point per game overall while proving a nice source of hits. Brown’s also racking up more PM this season, and while he’s playing on the top line and garnering plenty of PP time, he needs to be owned.

Marcus Hogberg, G, Ottawa Senators (ESPN: 0.9 per cent; CBS: 3 per cent): Okay, no one is going to label Hogberg as a saviour given his recent performance, but if you’re desperate for goaltending help in a deep league, give him a look while struggling starter Matt Murray is out. Yes, Hogberg could be the worst goalie in the NHL, but he’s going to get a chance to play now, and that means an opportunity to provide value. He did manage to chalk up a few wins last season, so there’s hope he can do the same now with his current shot.

Known for their extended songs, here’s one of Pink Floyd‘s shorter tunes — especially since it’s the single version. The only single from 1975’s Wish You Were Here — the band’s ninth album — was “Have a Cigar,” which tears a new asshole into the music industry.

By RotoRob
This entry was posted on Saturday, February 13th, 2021 at 11:33 am and is filed under HOCKEY, RotoRob, The Wire Troll. You can follow any responses to this entry through the RSS 2.0 feed. Both comments and pings are currently closed.