The Wire Troll: Jesse Puljujarvi is Back 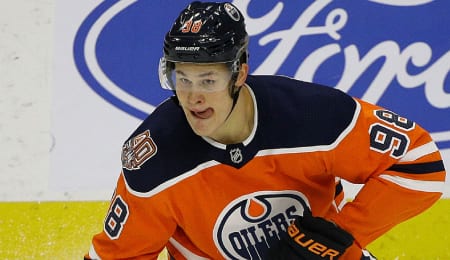 Jesse Puljujarvi has the size and skill to be awesome. (Larry Wong/Postmedia)

Welcome back to another season of Fantasy hockey! As always, we strive to offer up options that are actually available on your wire (owned in a maximum of 50 per cent of ESPN and CBS leagues).

This week, Nolan Patrick made a triumphant return to the NHL, scoring a goal in his first game in 652 days; Sergei Bobrovsky has been cleared to play from whatever ailed him; and 27 NHL players tested positive for Covid-19 during training camp, the majority of which were Dallas Stars, because, well… everything’s bigger in Texas.

And now, let’s get to our first batch of Fantasy Hockey waiver wire recommendations for 2021…

Jesse Puljujarvi, RW, Edmonton Oilers (ESPN: 41.8 per cent; CBS: 48 per cent): In late-November 2019, we recommended Puljujarvi based on the idea he might be headed back to the NHL from Finland. Well, that’s finally happened this season, and with seven shots on goal on Friday, it’s just a matter of time before he dents the scoresheet, especially after an impressive showing in training camp (see video below). The fourth overall pick in the 2016 draft — and most believed he’d go earlier than that — has the size and skill to be a stud, so we suggest you stick with him and see how this plays out.

Joel Farabee, LW, Philadelphia Flyers (ESPN: 40.7 per cent; CBS: 42 per cent): After scoring four points in season opener, Farabee was the NHL’s leading scorer after Day One. That lead has since slipped away after he was shut out on Friday (despite an increase in PT), but it’s clear the weight he added this offseason is going to help him. It’s not unreasonable to think Farabee could put up 30 or more points as the second-line left winger this season.

Tyler Johnson, C, Tampa Bay Lightning (ESPN: 21.9 per cent; CBS: 14 per cent): When we last checked in on Johnson in November 2019, we were projecting him to crack the 50-point mark, but we jinxed him as he slumped badly right after this article and then again in February and March before the season paused. With the Lightning up against the cap, the Spokane-born veteran started the season on the taxi squad, but he made his debut Friday, picking up an assist while going +1. Johnson’s best days may be behind him, but if he’s in the lineup, you want this dude on your team.

Alexander Romanov, D, Montreal Canadiens (ESPN: 11.9 per cent; CBS: 36 per cent): Romanov earned a third-pairing role for the Habs out of camp, but in the season opener he played 21:14, including plenty of power play action during which he earned an assist. The rookie looks like he’ll play in all situations, and will pitch in with blocks (four) and hits (one) as well.

Collin Delia, G, Chicago Blackhawks (ESPN: 0.4 per cent; CBS: 7 per cent): Back in January 2019, we pimped Delia as someone that could offer owners second-half goaltending help. Well, that didn’t work out so well as his game went downhill from that point on, and he didn’t play in the NHL at all last season. Delia is back in the bigs now, and while he didn’t look sharp in his season debut, he has a chance to carve out an important role this season as someone has to play net in Chicago, right? It might not always be pretty, but consider him worth a look in deeper formats.

Conor Garland, RW, Arizona Coyotes (ESPN: 7.4 per cent; CBS: 31 per cent): You may recall that when Garland went down with a serious lower body injury in March, he was the ‘Yotes’ leading goal scorer. Well, he’s healthy now and is clearly ready to pick up where he left off, scoring once and adding a helper in the opener. Garland has some serious stick handling skills, so grab the kid now and see if he can build off what he did last season.

Nils Hoglander, LW, Vancouver Canucks (ESPN: 11.6 per cent; CBS: 34 per cent): Do the Canucks have another rookie star on their hands in Hoglander? In the season opener, he scored a goal among three shots while going +2, before seeing a whopping 21:45 of ice time the next night. That kind of PT warrants your immediate attention, folks.

In the early ’90s, ex-members of the Specials, English Beat and Fine Young Cannibals combined forces in a band called Special Beat. Here they are in Sydney, Australia in mid-April 2009 performing “Hands Off, She’s Mine,” originally by the English Beat.

By RotoRob
This entry was posted on Saturday, January 16th, 2021 at 12:32 pm and is filed under HOCKEY, RotoRob, The Wire Troll. You can follow any responses to this entry through the RSS 2.0 feed. Both comments and pings are currently closed.