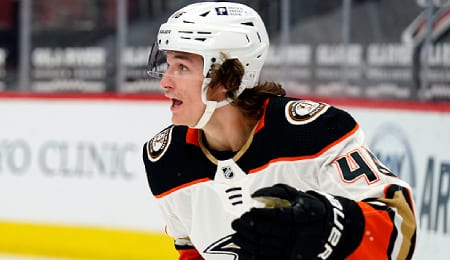 Welcome back to another week of Fantasy hockey. We’re just wrapping up February, and have passed the one-third mark of this strange and trying season. Do not let your foot off the gas, and keep going to the waiver wire as needed.

This week, the Sabres’ injury woes continued with captain Jack Eichel (LBI) out day-today; Henrik Lundqvist (heart) says he’s still months away from deciding his future; and Shark forward Tomas Hertl has been added to the NHL Covid-19 protocol list.

Trevor Zegras, C, Anaheim Ducks (ESPN: 12.1 per cent; CBS: 49 per cent): In our 2019-20 season review of the Ducks, we talked about how much Zegras would be needed to inject some offense into this team. Well, the time has come as he’s been recalled from the AHL, going +1 with a couple of shots in his NHL debut on Monday. Zegras managed a couple more shots in a bit more PT on Wednesday, and anyone that saw him kick ass in the 2021 WJC (see video below) has to know he’s ready to make his mark in the bigs. Part of the loaded 2019 USNTDP team, he’s capable of racking up tons of points and playing with an edge, to boot. In time, Zegras should become a highly effective two-way player.

Martin Necas, C, Carolina Hurricanes (ESPN: 22.3 per cent; CBS: 37 per cent): Necas seems to be the main beneficiary of Teuvo Teravainen‘s concussion, logging assists in the first two games that Teravainen has missed (plus a goal and an assist in the previous contest). Necas has been quieter in the two games since that streak, but continues to get shots on net. Still, as long as Teravainen remains out (and you never know how long that will be with a concussion), Necas is a fine waiver wire add, and long-term makes for an interesting trade target.

Matt Irwin, D, Buffalo Sabres (ESPN: 0.1 per cent; CBS: unowned): With Jake McCabe out for the season and Will Borgen sidelined for the next 6-to-8 weeks, Taxi Squad member Irwin is seeing time on Buffalo’s second D pairing, and getting some decent minutes (over 19:45 for three straight games before Thursday). The veteran took a +1 in each of those games, and even recorded an assist last weekend. Irwin has some size, and has definitely put up numbers in the AHL in the past (like a 40+ point season in 2011-12), so perhaps he can provide some short-term value.

Phillip Di Giuseppe, LW, New York Rangers (ESPN: 0.8 per cent; CBS: 1 per cent): Di Giuseppe is seeing extra minutes with Artemi Panarin taking a leave of absence in the wake of assault allegations surfacing. On Friday, the boost in PT paid off as Di Giuseppe potted his first goal of the season. He’s already passed his assist total from last season, and given his low shooting percentage so far (before Friday, he shared the league lead for shots on goal without a goal), his goal production should increase a tad, making him a decent deep league addition.

Chris Driedger, G, Florida Panthers (ESPN: 47.4 per cent; CBS: 49 per cent): Just under a year ago we recommended Driedger, but it was one of those picks that got wiped out by the stoppage in play. However, the way he’s playing right now, he’s giving the Panthers an edge in goal and deserves another shoutout. Driedger hasn’t been quite as dominant as he was last season, but with saves like this one, he needs to be owned.

Urho Vaakanainen, D, Boston Bruins (ESPN: 1.7 per cent; CBS: 2 per cent): With Jeremy Lauzon (broken hand) out at least a month, Vaakanainen has been pressed into action, and while he’s been getting physically manhandled more than you’d like to see, he also managed to drop helpers in each of his first two games since being recalled. Boston has shown confidence in the toolsy Vaakanainen, putting him on the top pair.

Carter Hutton, G, Buffalo Sabres (ESPN: 2 per cent; CBS: 9 per cent): Back in 2017-18, Hutton was a waiver wire darling, but it’s been all downhill since he arrived in Buffalo. However, with Linus Ullmark now hurt, Hutton has a chance to provide some value. On Thursday, Hutton was not sharp, but he needs to be watched given the opportunity in front of him. His standard numbers might not be great, but at least his CF percentage has risen to 50 this season.

Jake Allen, G, Montreal Canadiens (ESPN: 31 per cent; CBS: 30 per cent): When we last checked in on Allen just over two years ago, he was struggling as the No. 1 in St. Louis. Well, now he’s the backup in Montreal, and putting up great numbers. So with Carey Price having some issues, Allen may begin to get a bigger share of the pie.

Mats Zuccarello, RW, Minnesota Wild (ESPN: 48.8 per cent; CBS: 39 per cent): Back in October 2014, we considered Zuccarello a top 115 player for dynasty purposes. However, after a nice run with the Rangers, he really dropped off the table after landing in Minny. This season, however, after getting off to a late start because of injury, he’s killing it, with 10 points over his last five games.

By RotoRob
This entry was posted on Saturday, February 27th, 2021 at 12:19 pm and is filed under HOCKEY, RotoRob, The Wire Troll. You can follow any responses to this entry through the RSS 2.0 feed. Both comments and pings are currently closed.