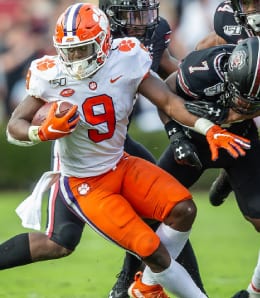 Travis Etienne is one of the most coveted running backs in the 2021 NFL draft. (Gamecock Central)

Etienne, who is unanimously projected as the first running back off the board, ran well in his senior year, showing strength and subsequently improved yardage after contact. While his rushing efficiency has gone down, the improvement in his receiving ability was enough to label him a viable three-down starter in the NFL (although he wasn’t a volume runner in college). Though not a necessarily big back, Etienne has flashed good contact recovery to maintain his feet after getting hit… as long as he fixes his ball security and fumbling issues. Oh, he also needs to stay away from those deadly kickers (see video below).

With both Ben Roethlisberger (and keep in mind Pittsburgh may be looking at drafting a QB) and Matt Ryan in the twilight of their careers, Atlanta and Pittsburgh are equally likely to secure a fresh running back to help carry the load. Expect Etienne to project as a low-end RB1 if he lands on one of these teams, and a RB2 if he heads to Jacksonville with (assumedly) Trevor Lawrence.

Harris made hims biggest improvements this year in his pass catching blocking in pass protection. He has a robust combination of size and lateral quickness that enables him to retain his speed while powering through tackles and throwing off defenders. Harris displays elite vision, patience and anticipation and possesses natural running instincts that should allow him to be employed as a three-down back in the NFL. However, expect him to go through a probationary period as the third-down back despite his recent improvements. Still, comparisons to Derrick Henry have us intrigued about Harris.

If Harris lands in Pittsburgh, it will yield the same low-RB1 scenario as Etienne, but with fewer catches and more goal line carries. If Harris finds himself on the Jets, he will be nothing more than a mid RB2 as he will have to compete with La’Mical Perine, Frank Gore and three other running backs with bloated contracts.

Williams is a physical bell-cow back who can bowl over tacklers and punish defenders on the ground and in the air. He shows quickness as a runner and with his low centre of gravity/pad level, he breaks a lot of tackles, generating yards after contact. Williams has quality hands and runs solid routes for a big back. He can identify the soft spots in the defense, but will need work as a blocker at the pro level. Williams’ draft stock may suffer from playing in weaker conference, but he could also end up being the first running back taken next month.

We believe that if Williams goes to the Steelers, he’ll become a top five running back operating in HC Mike Tomlin‘s regressive yet running back-friendly offense. If Williams gets drafted by the Ravens or Jets, downgrade his outlook as he’ll be operating within a committee.

Stevenson punishes tacklers as a heavy downhill runner, but he’s also a good route runner and caught the ball smoothly out of the backfield. After returning from a suspension early in the season, he rushed 101 times for 665 yards and seven touchdowns while adding 18 receptions for 211 yards. Stevenson dropped weight and looked quicker and more powerful during his six games in 2020.

Fullbacks will never get the love they deserve. Stevenson will drastically improve either New England’s or Kansas City’s rushing efficiency if drafted by one of these squads. Stevenson’s draft stock may be enhanced for these teams in the wake of KC losing Anthony Sherman to retirement this month and New England having James Develin call it quits last year.

Hubbard layed waste to the Big 12 in 2019, but showed signs of slowing down in his junior year before opting out to focus on the 2021 draft. Hampered by a lower body injury, he’s an upside risk for teams looking for a pure break-away runner. Though Hubbard lacks elite power and has a simple style of running, he has good vision and elite break-away speed.

He generally ran well in college, but looked terrible during third-down situations. With his speed, Hubbard needs to learn how to combine running routes and catching the ball.

Assuming Hubbard lands in Houston or Tennessee, we do not expect him to wrangle the starting job (aside from an injury) away from David Johnson (who is now backed up by Mark Ingram) or Derrick Henry, but he will make a good change of pace back when speed is needed. Hubbard should not be on your Fantasy radar yet, unless he winds up in a more opportune locale.

Peter Tosh was one of the core members of the Wailers, but had a fine solo career as well. In 1978, he teamed up with Mick Jagger to cover The Temptations with “(You’ve Got to Walk and) Don’t Look Back.”

By Lucas Chan
This entry was posted on Tuesday, March 16th, 2021 at 8:19 pm and is filed under FOOTBALL, Lucas Chan, NFL Draft, Scouting Report. You can follow any responses to this entry through the RSS 2.0 feed. Both comments and pings are currently closed.