The Wire Troll: Jay Bruce Manning First in the Bronx 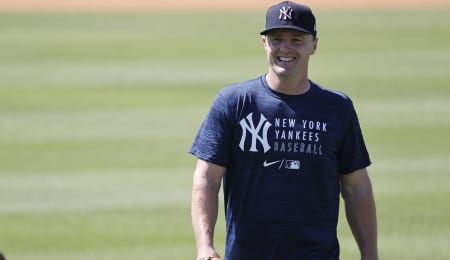 Jay Bruce is getting his shot with the Yankees. (Sports Illustrated)

Welcome back to another season of Fantasy baseball. Long-time readers will know by now that in The Wire Troll — our weekly Fantasy baseball waiver wire picks column — we always like to dig a bit deeper and offer you options that are actually available in your leagues. We will never recommend players with an ownership higher than 50 per cent in either ESPN or CBS leagues.

This week, Zack Greinke looked really sharp in Houston’s opener as the boos rained down on the Astros; Washington’s season opener was postponed thanks to positive Covid tests; and Justin Turner‘s baserunning gaffe cost Cody Bellinger a home run.

Jay Bruce, OF, New York Yankees (ESPN: 2.6 per cent; CBS: 9 per cent): The last time we checked in on Bruce, we correctly projected that he’d been much better in 2017. Unfortunately, he’s alternated good seasons and bad seasons since, which makes him due for a bounce back this year. And with Luke Voit on DL to start season, Bruce has a great chance to get off to a nice start as the starter at first base for the time being. Bruce managed a walk in the opener and he’ll face some competition from Mike Tauchman for the job, so this is definitely no sure thing. Bruce’s one-time modest speed has evaporated, so don’t expect anything there, but if he sees enough PT, that massive power will prove useful. The good news is he’s feeling healthy for the first time in quite a while (see video below), so let’s see what’s left in the tank here.

Josh Harrison, 2B/3B, Washington Nationals (ESPN: 0.5 per cent; CBS: 2 per cent): Harrison is another player that’s been thrust into a starting role at the beginning of the season, although for him it wasn’t because of an injury, but rather the ineffectiveness of Carter Kieboom. Keiboom was farmed out to Triple-A, opening the door for Harrison to man second base everyday for now. We recommended Harrison in early-September and he saw more PT down the stretch, but didn’t deliver as we expected. Well, we’re back to give him some more love for deeper NL-only leagues, but it’s important to note that he won’t be in action until Monday given the Nats’ Covid situation. Harrison is capable of delivering a solid BA, putting up some nice run and ribbie numbers and offering decent power and speed. His extra-base pop bounced back somewhat last season, so we’ll have to see if he can carry that into 2021 given the opportunity he has at the outset of the campaign.

Jazz Chisholm, 2B, Miami Marlins (ESPN: 5.3 per cent; CBS: 31 per cent): As we anticipated when we slotted him 31st in our Top 100 Fantasy Baseball Prospects, Chisholm did in fact win the second base competition for the Marlins. The first Bahamas-born player to be on an Opening Day roster since MLB began releasing annual data, he was hitless in the opener, but had a pair of hits (including a triple) and a run on Friday. In his first taste of the bigs last year, Chisholm had his struggles, but an extremely low BABIP was dragging his average down. Recall that after getting dealt to Miami at the trade deadline in 2019, he hit .284 at Double-A down the stretch, so he’s capable of better. And given Chisholm’s stolen base potential, he needs to be grabbed to see if he can take the job and run with it.

Originally from London, acid jazz legend Jamiroquai enjoyed a major breakthrough in 1996 with its third album, Travelling Without Moving — one of the decade’s finest discs. From this effort, the fourth single was “Alright.”

By RotoRob
This entry was posted on Saturday, April 3rd, 2021 at 12:34 pm and is filed under BASEBALL, RotoRob, The Wire Troll. You can follow any responses to this entry through the RSS 2.0 feed. Both comments and pings are currently closed.