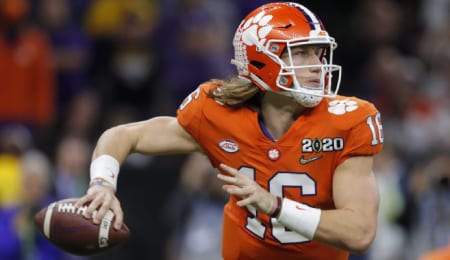 Fantasy football owners now turn their attention to the 2021 NFL Draft, so let’s get cracking on some previews, shall we?

We all know Trevor Lawrence will be the first quarterback (and first player, for that matter) off the board, but the debate will rage on into draft night as to who should be the second pivot taken. Here are our picks for the top five quarterback prospects in the 2021 NFL Draft.

Lawrence enjoyed arguably his best season in 2020, coming up just short of a national title while completing 69.2 per cent of his 334 attempts for 3,153 yards with 24 touchdowns and five interceptions — outpacing his 2019 efficiency by throwing for 0.4 yards per attempt more and tossing fewer interceptions. His skill set screams for an RPO spread/vertical offense featuring both the arm and legs of the quarterback, pre-snap and post-snap. Assuming he lands Lawrence lands in Jacksonville, we are skeptical the Jags will optimize the talent they’re given as the organization loves shooting themselves in the foot by running the ball. Because he needed labrum surgery on his non-throwing shoulder, he moved his pro day back to February 12, so now has seven months to recover.

There’s not a team that wouldn’t love to add this kid in the 2021 NFL Draft (hell, back in early November, we even suspected the Patriots might tank to get him), but the most likely landing spots are Jacksonville and Atlanta. Still, don’t count New England out yet (see video below).

Assuming he goes in the top five picks, Lawrence would be an instant upgrade for any of the teams slotted to pick there. If he lands in Jacksonville as expected, we predict the shift towards an inside-zone run game complimented by a spread-RPO pass attack featuring D.J. Chark and James Robinson. Lawrence will be a day one starter no matter what, likely topping out as a high-end QB2 for his rookie season, with QB1 potential down the road.

As one of the top recruits in the nation alongside Lawrence, Fields played at Georgia before heading to Ohio State for his junior season, throwing 225 times for 2,100 yards on a 70.2 per cent complete rate with 22 touchdowns and six interceptions. Fields has a rifle arm and can push the ball aggressively, but it remains to be seen if he can challenge NFL defenses the same way he did in college. He needs to rein in his downfield tendency by trusting his post-snap reads in a smash-mouth run/vertical pass offensive philosophy to minimize his bad habits and poor awareness.

Miami Dolphins, Atlanta Falcons (Here’s an indication of how high Fields could go in the 2021 NFL Draft.)

A team like Miami or Atlanta that predicates its offensive philosophy on RPOs and play actions will be a good fit for Fields. As a running quarterback, his style could negatively affect his NFL team’s running backs and tight ends because he has issues with post-snap reads so can struggle to execute check down throws.

Wilson flashed pro-level talent in completing 73.5 per cent of his 336 pass attempts for 3,692 yards, while drilling the ball in short, medium and long situations with accuracy and authority. His pristine timing, footwork, and anticipation are all good signs as a pocket passer. Wilson possesses rare mobility and athleticism, rushing for 254 yards and 10 touchdowns on 70 carries. Speeding up pre-snap readiness and post-snap will help him in the face of blitzes as he tends to sail passes high when pressured. BYU’s capable offensive line did Wilson no favours as he’ll likely head to a team with some of the worst protection in the NFL. He carries heavier risks than other quarterbacks in this draft as there are questions about his makeup, plus he lacks experience against elite competition given that BYU is an independent school so doesn’t face the top programs consistently.

We believe Wilson’s ceiling is as high as… well… Russell Wilson. If he starts as a rookie in either New York or Miami, the WR1 on each respectively team gets an instant upgrade. Each slot receiver deserves a small bump as well.

Trask dominated the SEC last year, completing 68.9 per cent of his 437 attempts for 4,283 yards (9.8 yards per attempt) and 43 touchdowns. We believe that other than Lawrence, he’s the most NFL-ready quarterback in this draft. Trask’s well-developed pocket passing ability and perception allows him to carve up defenses by making throws downfield accurately. He has good timing and precision, leading his receivers on tight window throws. Trask is a traditional passer, almost stone-like in the pocket, so he’ll need to improve his pocket fluidity. He requires a team with a strong line to support his lack of mobility.

If Trask lands in Denver he would probably start and represent an upgrade over Drew Lock, thereby boosting the trio of Courtland Sutton, Jerry Jeudy and Noah Fant. If Atlanta drafts Trask, it will hurt his value in the short-term as he would obviously play second fiddle to starter Matt Ryan.

Thanks to Covid-19, Lance’s 2020 campaign ended after one game, in which he threw for 149 yards with two touchdowns and an interception while rushing for 143 yards and two touchdowns. He charges hard at opposing defenders, demonstrating impressive burst for his hefty frame (6’5″, 240). Lance has a strong arm capable of making all throws at the NFL level, from leading his receivers over the top of coverage to firing bullets to the middle and sidelines. He’s a raw but talented athlete that has a negative tendency to lock on to his primary read and scramble when it’s not there. Lance needs to be more comfortable firing the ball into tight windows. He has the talent to be an NFL starter, but given his lack of playing time and development, most teams will need to be patient in order to nurture him.

We don’t anticipate Lance starting in his first year, however, if he does get the gig in Oakland, it will be a Fantasy situation to avoid at all costs given the current situation in Oakland that is not conducive to the development of young talent. If he winds up on the Steelers, Lance will be a downgrade from Ben Roethlisberger.

English funk band Jamiroquai is one of our all-time faves. Launched in 1992, they remain active to this day. We’ll never forget the day we went to pick up their fifth album, A Funk Odyssey, as it was released on September 11, 2001, a date that lives in infamy. The disc closes with the gorgeous “Picture of My Life.”

By Lucas Chan
This entry was posted on Wednesday, March 3rd, 2021 at 8:15 pm and is filed under FOOTBALL, Lucas Chan, NFL Draft, Prospects, Scouting Report. You can follow any responses to this entry through the RSS 2.0 feed. Both comments and pings are currently closed.