The Wire Troll: Brad Wanamaker Chipping in for Charlotte 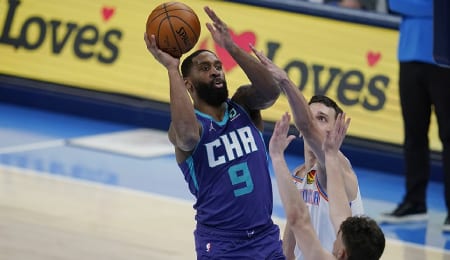 Brad Wanamaker has been a great addition to the Hornets. (AP Photo/Sue Ogrocki)

Welcome back to another week of Fantasy basketball. We’re nearly three-quarters of the way through the season, so it’s really time to make your move by grabbing some help off the wire.

This week, the Clippers sent a message in again beating the upstart Suns; Raptor guard Fred VanVleet got slapped with a one-game suspension; and Kevin Durant looked sharp in returning from a 23-game absence because of a hammy strain.

Brad Wanamaker, PG, Charlotte Hornets (ESPN: 0.4 per cent; CBS: 1 per cent): Charlotte is dealing with some serious injury issues right now with Gordon Hayward (foot) out at least three more weeks and Malik Monk (ankle) out at least another week, opening the door for new Hornet Wanamaker to see more PT. He was acquired at the end of March from Golden State, and while it’s been over a year since we last recommended him, that pick turned out well as he shot brilliantly from downtown in February and then saw his biggest minutes of the season in March before the Covid pause. Now he’s back to seeing nice minutes periodically, and he’s responded with double digit points in two of the last three while adding six dimes, two boards and a steal on Wednesday. Wanamaker followed that up Friday with six points, three boards, two steals and a team-high seven dimes. Suddenly, he’s hoisting way more treys this month, and while his PT had been down with the Warriors, he’s taken on a bigger role in Charlotte even though his minutes will be inconsistent off the bench (see Tweet below for an idea of how much better he’s playing). Right now, Wanamaker is a decent value option in DFS play and a temporary add for deeper redraft formats. Coming out of the University of Pittsburgh as a college player, he was known as a strong defender with leadership skills who was NBA ready. However, Wanamaker is limited by his lack of athleticism and quickness, so it’s quite conceivable we’ve already seen the best he can offer. Still, for what it’s worth, he does bring some toughness to the Hornets (see video below).

In addition to playing the sax, American jazz great Ornette Coleman also played violin and trumpet. Here’s another track from the 1970 album The Art of the Improvisers, which features outtakes from the albums The Shape off Jazz to Come, Change of the Century, This is our Music, Ornette! and Ornette on Tenor. Here is “Harlem’s Manhattan,” featuring bass player Jimmy Garrison, best known for his work with John Coltrane.

By RotoRob
This entry was posted on Saturday, April 10th, 2021 at 12:33 pm and is filed under BASKETBALL, RotoRob, The Wire Troll. You can follow any responses to this entry through the RSS 2.0 feed. Both comments and pings are currently closed.