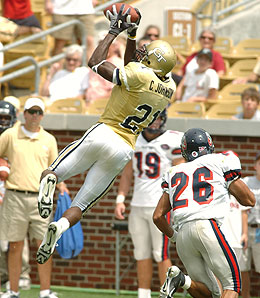 Two-time All-American Calvin Johnson will be leaping for the Lions this season.

Oh sure, Roy Williams was a great pick, but after failing with Charles Rogers and Mike Williams, you’d think Detroit would have had its fill of drafting wide receivers.

Yet, there the Lions were on Draft Day, grabbing Georgia Tech wide receiver Calvin Johnson with the No. 2 overall pick, continuing a five-year trek in trying to build around receivers. Then again, this 21-year-old is no normal wideout. He’s likely the most athletically gifted WR specimen to come into the league since Randy Moss.

While many experts thought Detroit might trade down for a package, picking Johnson ‘ likely the best player in the draft ‘ may actually turn out to be a pretty wise decision. First of all, he comes into the NFL in a good situation, getting to play opposite Roy Williams ‘ a scenario that will ensure he doesn’t see double teams right from the get go.

Bear in mind as well, that the Yellow Jacket Junior will operate under Lion offensive co-ordinator Mike Martz, who knows a thing or two about integrating star power into a cohesive offensive machine.

Like many young receivers, Johnson may need some time to adjust to the NFL ‘ after Detroit’s rookie camp wrapped up yesterday, he admitted he needs to get in better shape for the complete team mini camp which starts next week.

But no one is questioning Johnson’s impressive package of size (6’5’, 239), strength, speed and vertical ability. The 2006 Biletnikoff Award winner as college’s top wide receiver (an award that Rogers won in 2002), Johnson is capable of a 4.35 40-yard dash and his numbers at GT last season were mind blowing ‘ 76 receptions for over 1,200 yards receiving and 15 touchdowns.

The two-time All-American was the consensus top wideout in college football and the main man in the Yellow Jackets’ attack, coming in as a starter from day one. Tall and thick, Johnson has been compared to Andre Johnson but scouts would like to see him flash his blinding speed in game situations a bit more often.

Don’t be expecting 80 receptions in Johnson’s rookie season, but by bringing in a guy with big game experience ‘ Johnson had nine receptions, a season-high 186 yards receiving and two touchdowns in the Gator Bowl ‘ Detroit has made an important move on its way back to respectability. After all, anyone capable of making this kind of catch, has got to be an asset. Right?

By RotoRob
This entry was posted on Monday, May 7th, 2007 at 3:49 pm and is filed under Draft report, FOOTBALL, RotoRob. You can follow any responses to this entry through the RSS 2.0 feed. You can skip to the end and leave a response. Pinging is currently not allowed.