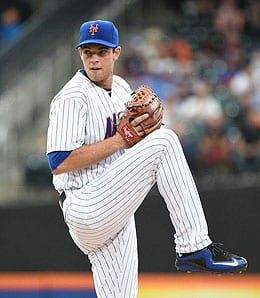 Steven Matz’s transition to the bigs has been seamless. (Kathleen Malone-Van Dyke)

Welcome back to the 2016 RotoRob MLB Draft Kit as we wrap up the countdown of our Top 75 Prospects. So while you Salvador Perez owners sweat it out, let’s get to those coveted top 10 prospects, shall we?

10. Steven Matz, SP, New York Mets (62): Matz made one of the biggest jumps of any prospects last year, soaring all the way into the top 10 after he recorded a sparkling 2.05 ERA over three minor league levels and then went undefeated in a half dozen starts in the bigs. This southpaw is gifted with superb mechanics and now that he’s established himself as a full-time major leaguer, he should be a rotation staple for many years to come. This year, Matz has proved even harder to hit, making us wonder what his ceiling is given how easily he’s transitioned to the Show. Hell, he’s even shown some trickery at the plate (see video below).

9. Nomar Mazara, OF, Texas Rangers (63): Speaking of huge jumps, Mazara just exploded up our list this year based on recording an 800 OPS at Double-A and then moving up to Triple-A and showing a patient approach that led to even better results in the final few weeks. This year, he was phenomenal during Spring Training, but had to begin the season at Triple-A. Not for long, mind you. He punished the PCL for just a few games before an injury to Shin-Soo Choo forced the Rangers to call Mazara up. Mazara wasted no time in establishing himself and he’s got tongues wagging everywhere as he sets his sights on AL ROY honours. The kid just keeps hitting and the only thing missing from his game is speed. BA? Mazara’s batting .311 a quarter of the way through the season. Power? All he did was hit the longest home run so far this season. Mazara looks like a superstar in the making.

8. Tyler Glasnow, SP, Pittsburgh Pirates (17): Glasnow, a towering righty the Pirates nabbed in the fifth round in 2011, has surged into our top 10 this year after proving he can win at Double-A and then posting an even better ERA after a promotion to Triple-A in 2015. He’s only been taken yard 20 times in five professional seasons (including this year) while maintaining a lifetime BAA under .180. Really?!? All the while, Glasnow has racked up the punchouts, averaging 11.69 K/9 since being drafted out of a California high school. Best of all, he’s been durable, and it’s clear based on the consolidation of his superb Triple-A results this year that he’s ready for the majors as soon as Pittsburgh needs help. The only worry is his control, but he’s made strides in that regard this season as well.

7. Yoan Moncada, 2B, Boston Red Sox (NR): When we did our rankings last year, Moncada was a virtual unknown from Cuba, having yet to start his career in organized baseball. But he’s so mature physically for his age that the transition was simple as he started out at full-season ball last year and racked up the hits, flashing superb on-base skills, decent power and tremendous speed. Five-tool prospect? Oh yes. This year, Moncada has become even more feared a hitter at High-A, as he’s slightly improved his contact rate, beefed up his batting average and has any many steals as any minor leaguer. We’ll have a clearer idea how good he can be as moves up to the next level, but so far, it’s pretty damn impressive.

6. Joey Gallo, 3B/OF, Texas Rangers (8): Your hear a lot about prodigious power, but until you’ve seen Gallo mash one into the stratosphere, you never fully appreciate what that means. He moved up a tad in our rankings this season based on the amazing extra-base pop he flashed at Double-A, earning him a promotion to the majors. After a phenomenal debut, Gallo fizzled and was demoted to Triple-A, where he really struggled. Okay, so all told, his BA really declined last year, but the adjustments he’s made this season speak to his growth as a hitter. Gallo is still producing tons of extra-base hits, but is also walking way more, striking out much less and hitting for the highest average he’s shown since he was in High-A. Let’s remember he’s only 22, and then consider he already has 136 career homers in 410 minor league games. The strikeouts will likely always be an issue, but a dude that can hit 40 homers blindfolded does not come around very often.

5. Julio Urias, SP, Los Angeles Dodgers (12): Urias dealt with some injuries last year, but the fact that he was able to show such fine control and limit baserunners as he did at Double-A at the age of 18 forced us to move him into the top five this season. He’s been ridiculously dominant at Triple-A this year, prompting a promotion to the majors. Yes, that first start in the Show was ugly and the second one was only slightly better, but the Dodgers are giving Urias another shot, and at the very least, the lefty will remain a starter for now given the team needs. After all, he just went through 27 innings at Triple-A in May without giving up a single earned run. This child prodigy is nearly ready to take the next step.

4. J.P. Crawford, SS, Philadelphia Phillies (13): A year ago, Crawford made his debut on our list, and has now also risen into the top five this year a season after he piled up the runs at High-A, earning a fairly early promotion to Double-A, where he flashed some decent power. Despite an injury, he enjoyed a season of growth in 2015 which is why many were surprised he began this year back at Double-A. But based on Crawford’s patient approach early on, he finally got the call to Triple-A a couple of weeks ago. The adjustment has been slow, but he should start to show signs of life soon. In fairly short order, Crawford will take his place among the great wave of young shortstops either already in the bigs or on their way.

3. Lucas Giolito, SP, Washington Nationals (6): Giolito is now the top pitching prospect in the game after last year he pitched so well at High-A (masked by a poor record) and then moved up to Double-A and had a higher ERA despite strong peripherals. This durable and tall righty is back at Double-A this season and while his WHIP has risen, it would be a surprise to not see him promoted to the majors very, very soon. Giolito has a chance to be a very special pitcher; the only question now is where does he fit on a stacked National rotation? Washington has one of those good problems with its top prospect.

2. Byron Buxton, OF, Minnesota Twins (1): Buxton has slid all the way down to No. 2 this year. I know… what a stiff, huh? Last year, he flashed great speed at Double-A and racked up the total bases at Triple-A, but struggled to get on base during his stint with the Twins, finishing one at-bat shy of exceeding his rookie eligibility for 2016. But a prospect Buxton remains, reminding us this year why he was No. 1 in 2015 by racking up a ridiculous 70 total bases in just 29 games at Triple-A after being demoted early in the season. He’s back in the bigs now and you cannot ignore the immense upside here, especially since the early returns suggest he’s now ready to make good on his promise.

1. Corey Seager, SS/3B, Los Angeles Dodgers (5): Seager was already a top five prospect heading into 2015 and then he hit the cover off the ball at Double-A for a few weeks before an early-season bump up to Triple-A, where he continued to rack up the total bases. Oh, and then he topped it off with a seamless transition to the bigs, where he hit even better. Small wonder Seager soared to the top of the charts this year. He’s proven he can almost single-handedly power the Dodgers to wins on occasion (how about five homers in two games on the weekend?) and it’s clear he’s landed in the bigs to stay now, already looking like a grizzled veteran. Power, average, productivity; in due course, he’ll be the best shortstop in the NL.

By RotoRob
Tags: MLB
This entry was posted on Monday, June 6th, 2016 at 4:17 pm and is filed under 2016 RotoRob MLB Draft Kit, BASEBALL, Prospects, RotoRob. You can follow any responses to this entry through the RSS 2.0 feed. Both comments and pings are currently closed.