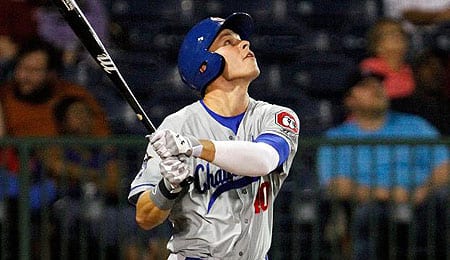 Welcome back to the 2016 RotoRob MLB Draft Kit as we enter the prospect portion of our tome. So while you wonder if the Blue Jays have the best lineup in baseball, let’s launch into our Top 75 prospects.

In this, our 12th annual list, we’ve again beefed things up things — going 75 deep for the first time.

This season, we’re up to 35 returnees from our 2015 rankings (rising from 29 last year), while a whopping 27 from last year’s Top 70 prospects graduated to the bigs (up from 21 grads last year).

The number of prospects that fell off the list this year plummeted from 15 to eight, which suggests we were really on the mark last year, selecting fewer players that didn’t pan out — and not a single one ranked higher than No. 44. The upshot is there’s 40 newcomers (compared to 41 last year) despite the fact we went from 70 to 75 prospects this year.

Now go get yourself a huge ass coffee and then sit down to enjoy Part I our tome of prospects.

75. Max Kepler, 1B/OF, Minnesota Twins (NR): This big German native was signed by the Twins as an undrafted free agent in 2009 and has slowly made his way through the organization, earning his first look in the majors last year. Kepler has been a big run producer in the minors, last year driving in 71 runs at Double-A while flashing more speed than ever to earn Southern League MVP honours. He earned an early call-up back to the majors this season (see his reaction in the video below), and there are some that believe the Twins should give him every chance to stick.

74. Luis Ortiz, SP, Texas Rangers (NR): Ortiz is the fifth and final (or first, considering we’re counting down) Ranger on our Top 75 and the team’s top pick (30th overall) in 2014. He looked phenomenal at Class-A last year, but elbow woes limited him to 50 innings. Ortiz has been bumped up to High-A this season and pitched out of relief in his first outing. He’s expected to be a part of the starting rotation, which is good news for his future Fantasy value as he could top out as a No. 2 starter in time. Ortiz’s arsenal includes a low-90s heater, a nice looking slider and a changeup that needs refinement.

73. Tyler Kolek, SP, Miami Marlins (43): The Marlins’ 2014 first rounder dropped 30 spots this year after suffering a boatload of losses in his full season debut in 2015. The good news is he stayed healthy, the bad news is that luck ran out this spring as he needed Tommy John surgery that will sideline him for the season. Don’t give up on Kolek yet, but his timetable to being a big leaguer just got longer.

72. Kyle Tucker, OF, Houston Astros (NR): Houston’s 2015 first round pick hasn’t gotten as much ink as some of the prospects on this list, but that will change soon if he blows up at full-season ball this year. The Astros have a lot of talented prospects at Class-A Quad Cities this season, but Tucker’s potential as a future middle of the order threat is among the most exciting aspects of that team. He has a chance to become a run producer with good speed.

71. Jorge Mateo, SS, New York Yankees (NR): In the past couple of years, the Yanks have been heading in the right direction in terms of developing in-house talent to sustain themselves, and Mateo is one of the better examples of this philosophy. He’s got great speed (71 steals in 96 games at Class-A before a promotion to High-A last year), and flashed some surprising power in Spring Training. Mateo impressed the Yankees with his talent and approach, and his experience with the big league team seems to have sparked him, as he’s putting up the best numbers of his minor league career early on at High-A, suggesting the Yankees’ No. 2 prospect may be in line for a fairly quick promotion to Double-A.

70. Raimel Tapia, OF, Colorado Rockies (NR): Part of a promising group of prospects that will try to return Colorado to the winning ledger for the first time since 2010, Tapia has landed on the list this year after making better contact at High-A last season. He did a better job on the basepaths, and while his BA has dipped as he’s risen through the ranks, he’s still better than a .310 hitter for his minor league career. If Tapia learns how to draw more walks (so far, he’s drawn three in his first four games at Double-A, which is very promising), he’ll soon be major league ready.

69. Amir Garrett, SP, Cincinnati Reds (NR): Another newcomer to our list this year, Garrett enjoyed a breakout season at High-A in 2015, reaching 140 innings for the first time while enjoying his first sub-2.50 ERA. His walk rate was up slightly, and he’ll need to improve that, but with his solid hit rates, nearly a K per inning and extremely stingy long-ball tendencies, he looks like a very fine prospect. The fact that Garrett only walked one over six innings in his Double-A debut this season was very promising indeed. Opportunity abounds in Cincy, so keep an eye on this kid.

68. Cody Reed, SP, Cincinnati Reds (NR): Did we mention yet that the Reds have a ton of pitching prospects on the way? Dealt to Cincy from KC in last summer’s Johnny Cueto trade, Reed was the Royals’ seventh round pick in 2013. Tall and left-handed, Reed showed real sweet strikeout potential last year, fanning almost a quarter of the batters he faced at High-A and Double-A. He proved he can win, and did a brilliant job of limiting homers at High-A before a promotion to Double-A, where his ERA rose. Reed remained at Double-A after the trade and walked more, but enjoyed a higher strikeout rate than ever.

67. Sean Manaea, SP, Oakland Athletics (54): Acquired from KC in the Ben Zobrist deal, Manaea slipped in our rankings a tad this year after missing a good chunk of 2015 with abdominal and groin injuries. Manaea is another tall lefty that’s armed with a fastball, slider and changeup that are all either average or better pitches, helping him rack up tons of Ks last year. He’s MLB ready now, so could get a shot very soon — especially with the A’s losing Felix Doubront for the season.

66. Brian Johnson, SP, Boston Red Sox (NR): Johnson, 25, dealt with some health issues last season, as an elbow woe derailed what was shaping up as a career year. To make matters worse, a toe woe this spring shot a hole in his chances of breaking camp with the BoSox. Instead, the lefty is back at Triple-A this season. Johnson’s sweeping curveball is his best offering, and will be the pitch that determines how quickly Boston’s 2012 first rounder gets back to Fenway after making his MLB debut in late-July last year.

65. A.J. Reed, 1B, Houston Astros (NR): Reed was taken in the second round in 2014 by Houston out of the University of Kentucky. Last year he was dominant, scoring 75 runs and driving in 81 in 82 games at High-A before a promotion to Double-A, where his OBP dipped — yet was still over .400. Early on, Reed continues to be ridiculously productive at Triple-A, but he suddenly finds himself blocked by Tyler White — one of the greatest early-season stories. Still, White’s hot start notwithstanding, nothing will stand in the way of Reed arriving in Houston very soon.

64. Carson Fulmer, SP, Chicago White Sox (NR): Fulmer was the first round pick for the Pale Hose last year and after making just nine pro starts in 2015 following inking his deal, the righty already finds himself at Double-A this season. This short 21-year-old was originally taken by Boston in the 15th round in 2012 before opting to attend Vanderbilt, which has done such a great job of producing top MLB talent in recent years (nine first rounders in the last nine years). Two hurlers were taken before Fulmer came off the board eighth, but by the time all is said and done, he could wind up being the best arm of the 2015 draft.

63. Daz Cameron, OF, Houston Astros (NR): The son of long-time big leaguer Mike Cameron showed an ability to draw a walk in his pro debut last year and it’s exciting to wonder if he’s capable of being an even better player than his three-time Gold Glove winning dad. Daz is off to a slow start in his first crack at full season ball this year, but even when he’s not hitting, his superb defense in centre field will make him an asset. He’s a potential five-tool player, so once he makes the necessary adjustments at the plate, he’ll be something special.

62. Nick Gordon, SS, Minnesota Twins (48): Apparently, we’ve entered the sons of ex-big leaguers section of our rankings, as Tom’s kid checks in next. Nick flashed more speed last year, but wound up dipping in the rankings. He remains one of the Twins best prospects and early on this year looks driven to return to top 50 prospect status as he recently matched a career high with four hits in a game — three of which were doubles. The fact that he’s driving the ball harder this year — and to all fields — is a great sign.

61. Anthony Alford, OF, Toronto Blues Jays (NR): Alford hadn’t really been on the Fantasy radar until now, but after a breakout season at Class-A last year in which he racked up 100 total bases in just 225 at-bats while flashing sweet speed, he’s a known commodity now. That performance prompted a promotion to High-A, where he continued to average over a hit per outing. Last year was the first time Alford showed some extra-base sock. Unfortunately, a leg injury has slowed the Blue Jays’ top prospect early on this season at High-A.

60. Alex Jackson, OF, Seattle Mariners (21): Jackson has dipped substantially in this year’s rankings as the Mariners’ first rounder (sixth overall) in 2014 really struggled between Low-A and Class-A last year. His base stealing was atrocious and he struggled to hit for power. Shockingly, the Mariners kept him in extended Spring Training this year despite his strong performance in the exhibition schedule. But Seattle wants to see more consistency from him — not to mention a stronger work ethic. The talent is there. After all, he was one of the best high school hitters in his draft class, but his makeup has been the issue. Once Jackson addresses that, he has the skills to really advance quickly.

By RotoRob
Tags: Max Kepler, Minnesota Twins, MLB, Prospects
This entry was posted on Wednesday, April 13th, 2016 at 11:29 am and is filed under 2016 RotoRob MLB Draft Kit, BASEBALL, Prospects, RotoRob, Scouting Report. You can follow any responses to this entry through the RSS 2.0 feed. Both comments and pings are currently closed.