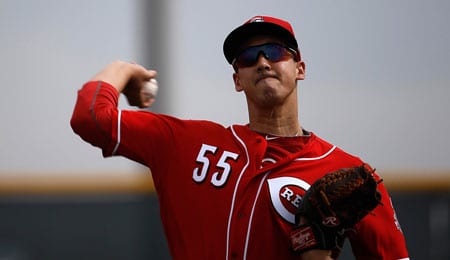 Robert Stephenson can bring the heat, making him a fascinating prospect. (AP)

Welcome back to the 2016 RotoRob MLB Draft Kit as we continue to count down our Top 75 Prospects. So while you marvel at what David Ortiz is doing for his swansong, let’s review prospects 29 through 21.

29. Robert Stephenson, SP, Cincinnati Reds (19): After posting an ERA north of 4.00 in about a half-season at Triple-A last year, Stephenson has slipped out of the top 20 in our rankings. But that doesn’t mean we’re not still very high on Cincy’s top prospect. Armed with a heater than can flirt with 100 mph, Stephenson has been working at trying to improve his secondary offerings to make that fastball even more devastating. He’s been durable and we love the fact he was much harder to take yard last season. This year, Stephenson has been needed a couple of times in the majors (each time with greater expectations, as you can see in the video below) and his second start in particular was splendid. Given his dominant ways back at Triple-A, he’s ready to stick if the Reds opt to bring him back to Cincy, and if he does, Fantasy owners — in both dynasty and redraft formats — will want to jump on him.

28. Alex Bregman, SS, Houston Astros (NR): The first new player in this section has quickly become Houston’s top prospect. Bregman, a first round pick last year, began his pro career at Class-A last year, flashing gap power and some speed. He was promoted to High-A, where his power began to manifest itself in more earnest as he gained some valuable experience. Moved to Double-A this year, Bregman smashed five dingers in his first 50 at-bats before a hamstring injury sidelined him (he slowed down a bit since returning). There’s certainly no reason to rush this dude with Carlos Correa currently manning short in the bigs, but if Bregman keeps mashing long balls, the team is going to have a nice problem on its hands in terms of shortstop depth.

27. Blake Snell, SP, Tampa Bay Rays (NR): Another newcomer this year, Snell thrust his way into the Fantasy consciousness after last year he went undefeated at High-A, proved unhittable at Double-A and then put together an even better WHIP at Triple-A. All told, he won a whopping 15 games last season and while he’s been a bit more wild at Triple-A to start this year, it didn’t stop the Rays from giving him a spot start — in which the southpaw was splendid. Snell, considered by some as a top 15 prospect, has clearly established himself as a star in the making.

26. Jon Gray, SP, Colorado Rockies (24): Gray has slipped ever so slightly this year after slotting 24th last season — the second straight year he’s slid a tad. Last year, he spent most of the season at Triple-A struggling through his worst ERA yet, but he also saw time in the bigs, failing to win any of his nine starts. There are concerns that the Rockies have affected his development with strict pitch counts, but the talent is undeniable. Gray got off to a late start this season as he began on the DL with an abdomen injury and was hit hard upon his activation, but has really bounced back in May to solidify his rotation spot. Gray’s strikeouts make him a fascinating Fantasy option — especially long term.

25. Sean Newcomb, SP, Atlanta Braves (64): The Angels’ 2014 first rounder (15th overall) soared up the list this year after going undefeated at Class-A, proving very hard to hit at High-A and then finishing the season with a sweet ERA at Double-A. All told, Newcomb was masterful last year, and surrendered very few dingers along the way. The Angels’ top pitching prospect was dealt to the Braves in the offseason in the Andrelton Simmons trade and continues to excel at Double-A in the early going this year — although he’ll really need to sharpen his control. Built like a house, Newcomb has the makings of a durable workhorse and he should be a huge part of the Atlanta rebuilding project.

24. Tim Anderson, SS, Chicago White Sox (65): Anderson has really soared up our rankings this year based on his 2015 season when stayed healthy at Double-A and hit very well. His home run power dipped, but we love the speed, BA and on-base skills here. Anderson has moved up to Triple-A this year and while he started slowly, he’s really coming around now. The White Sox top prospect may need a bit more seasoning, but is likely to get a September call up at the very least.

23. Jose De Leon, SP, Los Angeles Dodgers (NR): Another new hurler to the rankings this year is De Leon, who burst onto the scene after putting up a ridiculous 0.90 WHIP at High-A and then continuing to rack up a crazy amount of Ks at Double-A last season. Now at Triple-A, all he did in his season debut was punch out another nine batters in five innings and it’s crystal clear that should the Dodgers need a long man/spot starter, De Leon could fill that role immediately. The team has itself a steal here, taking this kid in the 24th round in 2013. He’ll almost assuredly make his big league debut this year at some point, assuming he’s healthy and effective.

22. Rafael Devers, 3B, Boston Red Sox (NR): Devers has landed on our list this year after a 2015 campaign in which he hit extremely well and was highly productive in his first try at full-season ball. The move to High-A this year isn’t going nearly as well, but he’s starting to turn that around in the last couple of weeks. Some experts aren’t as high on Devers as we are, but we strongly believe he will make the adjustments needed and that an early-season unlucky BABIP was part of the reason he struggled out of the gates.

21. Bradley Zimmer, OF, Cleveland Indians (NR): Yet another newcomer, Zimmer burst onto our rankings this season after a 2015 campaign in which he scored a boatload of runs at High-A before advancing to Double-A, where his slugging dropped off. All told, his walk rate dipped at the higher levels — and that’s something to keep an eye on — but we love his potential. Zimmer carries himself like a big leaguer and should bring nice speed and great defense with a fine arm to Cleveland in time. Once he figures out Double-A, he could move fast and develop into a future All-Star Game staple.

By RotoRob
Tags: MLB
This entry was posted on Monday, May 16th, 2016 at 9:45 am and is filed under 2016 RotoRob MLB Draft Kit, BASEBALL, Prospects, RotoRob. You can follow any responses to this entry through the RSS 2.0 feed. Both comments and pings are currently closed.