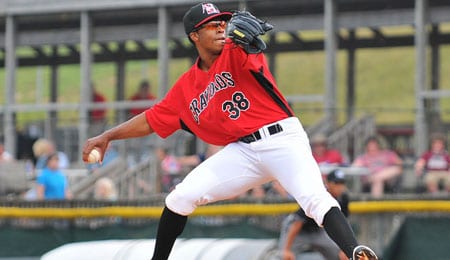 Welcome back to the 2016 RotoRob MLB Draft Kit as we continue to count down our Top 75 Prospects. So while you the Dodgers worry about yet another hurt pitcher after Pedro Baez was hit in the head by a pitch in the bullpen, let’s review prospects 49 through 40.

49. Dillon Tate, SP, Texas Rangers (NR): A product of UC Santa Barbara, this righty was the Rangers’ top pick last year. Tate was very impressive in limited action after signing last summer, and this year, his professional apprenticeship has begun in earnest as he starts to get some innings under his belt. So far, he looks more than ready for the challenge; expect this kid to move through the Texas system very quickly, although a current hamstring woe will restrict that progress for the time being. For a preview of what hitters will be facing, see the video below.

48. Jose Peraza, 2B, Cincinnati Reds (36): Think the Braves are regretting trading away Peraza now that the main player they got back (Hector Olivera) has been busted? Of course, the Dodgers also dealt Peraza away in the three-team deal that saw the Reds peddle Todd Frazier. Despite his superb contact rates, Peraza dipped in our rankings this year, but he’s performing much better at Triple-A this year, so keep an eye on this kid.

47. Aaron Blair, SP, Atlanta Braves (51): After putting up a spectacular record between Double-A and Triple-A (with a combined sub-3.00 ERA) and again staying healthy, Blair has surged into our Top 50. This big dude has the look of a future workhorse all over him, and with his fine fastball and curveball, he’s major league ready now. Blair was looking great at Triple-A (especially since his strikeout rate bounced back), so it was no surprise he was the first starter recalled when the Braves needed help.

46. Grant Holmes, SP, Los Angeles Dodgers (NR): The Dodgers’ 2014 first rounder landed on this list despite experiencing a slightly higher WHIP than we would like to see in his first taste of full-season ball. Holmes has now moved to the Cal League, and he’s looked very sharp at High-A early on. The Dodgers have several pitching prospects on the way, so he could become trade bait if they decide to make a play for a veteran hurler this summer.

45. Brent Honeywell, SP, Tampa Bay Rays (NR): Another new pitcher to this year’s rankings, Honeywell was a 2014 first round compensation pick for the Rays, logging plenty of innings and proving very tough to hit last year. He’s returned to High-A this season and looks ready to move to the next level as he’s completely dominating early on, posting a video game like 0.50 ERA through his first three starts. Expect to see Honeywell moved up to Double-A very soon and his performance at that level will tell us much about how far he’ll shoot up these rankings a year from now. Our guess is he’ll rise substantially.

44. Jameson Taillon, SP, Pittsburgh Pirates (35): The fact that Taillon has only slipped marginally despite missing the last two seasons with injuries gives you an idea of how much potential he has. The second overall pick in 2010 has displayed tremendous command in his pro career, but after two years off, it’s truly amazing to see him return to Triple-A this year and fan 10 with no walks in his first 10 1/3 innings back. Taillon is likely to make his big league debut this year now that he’s finally healthy, and we suspect it will have been worth the wait.

43. Brett Phillips, OF, Milwaukee Brewers (NR): The first new position player in our rankings in a bit, Phillips landed on this list after last year he proved he can hit at the higher levels. Houston’s 2012 sixth round pick was dealt to Milwaukee last year in the Carlos Gomez trade. Phillips has a very short and easy swing capable of generating some nice power, but as evidenced by his .320 mark at High-A (followed by a .321 BA at Double-A before he was dealt), he can hit for average, too. Best of all, he’s also got speed, averaging nearly 20 swipes over the past three minor league seasons. Phillips brings a bit of everything to the park, and that’s exactly the kind of prospect that can be Fantasy gold for keeper league owners.

42. Willy Adames, SS, Tampa Bay Rays (NR): Another new position player this year is Adames, a 20-year-old Dominican that racked up a fair amount of total bases at High-A last year — as a teenager. The kid has decent speed, and although his hitting has suffered a tad since being promoted to Double-A this year, again — let’s keep things in perspective given his age. Adames seems to have a knack for getting a knock at the key time, as well, batting .270 with RISP last year, and 3-for-7 early on this season.

41. Nick Williams, OF, Philadelphia Phillies (NR): Clearly, the slump for new additions from the position player ranks is over! Williams was the Rangers’ 2012 second round pick and part of the huge package sent to the City of Brotherly Love to land Cole Hamels. Williams was productive at Double-A before the trade and he really turned on the extra-base pop after landing in the Philly organization. All told, he forced his way onto our rankings with a healthy and productive 2015 campaign. Now one of Philadelphia’s top prospects, Williams is making his Triple-A debut this year, and while his adjustment has been slow in the early going, there are a lot of expectations for this kid now and you have to know his path to the majors is much clearer since being moved out of Texas.

40. Archie Bradley, SP, Arizona Diamondbacks (20): Does it seem as if Bradley has been a prospect forever? Well, that’s because in this fly-by-night prospect era, he has — this marking the fourth year running he’s been on our list. He’s dropped substantially this year after being slotted 20th last season — which was a drop from eight in 2014. Bradley finally made his MLB debut last year, but took his lumps. And while he pitched well in the minors, he missed significant time with injuries, further eroding our faith. Still, he’s only 23 and the D-Backs remain convinced he can be a star hurler, but if he doesn’t stay healthy and deliver this season, our confidence in his future will be severely tested.

By RotoRob
Tags: MLB
This entry was posted on Tuesday, April 26th, 2016 at 6:39 pm and is filed under 2016 RotoRob MLB Draft Kit, BASEBALL, Prospects, RotoRob, Scouting Report. You can follow any responses to this entry through the RSS 2.0 feed. Both comments and pings are currently closed.