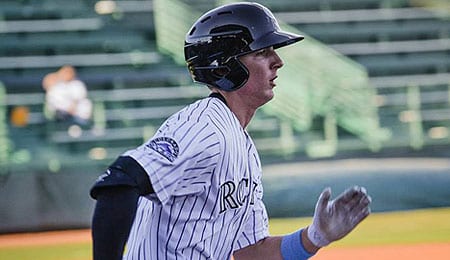 Ryan McMahon should soon be more of a household name. (Grand Junction Rockies)

Welcome back to the 2016 RotoRob MLB Draft Kit as we continue to count down our Top 75 Prospects. So while PED suspicions swirl around Jake Arrieta, let’s review prospects 39 through 30.

39. Ryan McMahon, 3B, Colorado Rockies (NR): McMahon, Colorado’s 2013 second round pick, was a somewhat unknown in Fantasy circles until last season when he hit .300 with a boatload of runs and ribbies at High-A. We love his slugging potential, and while he’s having a tough time adjusting to Double-A in the early going this season, we’re not worried. McMahon is starting to show signs of productivity (see video below) and it’s just a matter of time before he adjusts to this level and starts to drum up more hype. Of course, the Rox already have a pretty good young player manning the hot corner, but it’s a good problem to have, right?

38. Clint Frazier, OF, Cleveland Indians (NR): Another newcomer to the list this year, Frazier was Cleveland’s top pick in 2013 and after improving his contact rates and flashing more speed than ever at High-A last year, he’s landed firmly on the prospect list. He has power, speed, can hit for a pretty high average and will even bunt his way on at times. Frazier has made the jump to Double-A this year and while the Georgia high school product isn’t walking as much, the rest of his numbers have remained solid — a very promising sign, indeed.

37. Jake Thompson, SP, Philadelphia Phillies (49): Thompson — who was yet another component of the return Philly got for Cole Hamels — has risen into the top 40 after posting a decent ERA and doing a good job of limiting homers at Double-A last year. Thompson was a little easier to hit last season, and he’s finding the adjustment to Triple-A very difficult so far, but this righty is armed with a nice slider and he should be ready to make his MLB debut later this year — assuming he can find his game in the minors soon. The best part? Now that he’s with the Phillies, his opportunities to advance will be much more plentiful.

36. Josh Bell, 1B/OF, Pittsburgh Pirates (47): Bell is another player that has risen in our rankings this year based on a fine 2015 campaign. The switch-hitter showed decent pop and fine production at Double-A and then really turned it on after being promoted to Triple-A for the final few weeks of the season. This year, Bell’s slash line has dipped at Triple-A, but he’s been extremely productive, so much so that he could force his way up to Pittsburgh at some point. He’s starting to look like a potential star.

35. Jesse Winker, OF, Cincinnati Reds (61): Yet another returnee that made a nice jump in this year’s rankings, Winker projects as a high average, power-hitting outfielder. With the Reds’ current left field situation hardly awe-inspiring, he has a chance to be a factor at some point this year. Winker had a productive season at Double-A in 2015 and he has not looked overmatched in the least in moving to Triple-A this year. So far, only the flu has slowed him down, so we’re expecting his big league debut to occur in the not too distant future.

34. Lewis Brinson, OF, Texas Rangers (NR): Brinson, Texas’ first round pick in 2012, debuted on the list this year based on a breakthrough campaign in which he tore up High-A, continued to flash sweet power at Double-A and then raked in a brief trial at Triple-A at the end of the season. All told, he enjoyed some serious power last year, and this extremely athletic outfielder that’s brimming with skill is very coachable. Brinson is back at Double-A this year, and while he’s not dominating the way he did in 2015, Texas has shown a penchant for bringing youngsters to the bigs and giving them a shot, so don’t be shocked if he gets the call at some point soon.

33. David Dahl, OF, Colorado Rockies (22): Dahl is one of the players on this list heading in the wrong direction. He’s slipped out of the top 25 this season after an injury-shorted and unproductive 2015 effort. The good news is Dahl has hit the ground running back at Double-A this year with a serious power showing and an improved walk rate over the first few weeks. He’s piling up the runs and is putting up his best numbers since Rookie ball. If Dahl’s exploits continue, he’ll put himself in consideration as a potential big league call-up later this season.

32. Jeff Hoffman, SP, Colorado Rockies (NR): The first new pitcher in this section of the rankings, Hoffman was the Jays’ 2014 first round pick (ninth overall) and sent to Colorado last year as part of the Troy Tulowitzki trade. In his first pro season last year, Hoffman enjoyed a solid ERA at High-A before getting bumped up to Double-A just before the deal. Overall, he proved he can win in the pros and got some great experience — enough so that the Rockies felt comfortable enough to promote him to Triple-A this year. It’s a jump Hoffman has handled with ease, going undefeated with a microscopic ERA through the first few weeks. He’s very hard to hit and difficult to take yard, although once he arrives at Coors Field, we’ll test that theory in earnest. Colorado is intent not to rush this kid, but the way he’s pitching, it may not have a choice soon but to see what he can do in the bigs.

31. Gleyber Torres, SS, Chicago Cubs (NR): Just what the Cubs need — another stud middle infield prospect. Torres burst onto the map last year after showing some nice extra-base pop at Class-A before earning a late-season promotion to High-A. All told, he showed he’s capable of delivering the hits, but fewer Ks and better work on the basepaths will be needed for him to become a star. Signed by the Cubs as an International free agent out of Venezuela in 2013, Torres has some sweet tools and as soon as those begin being translated into results at High-A, he has a chance to move up very quickly.

30. Ozzie Albies, SS, Atlanta Braves (NR): Another new shortstop to the rankings (are we heading into another golden age of shortstops or what?), Albies took on full season ball for the first time last year, and while an injury shortened his season, he hit very impressively while active (he’s a .330 hitter through 175 career minor league games). Better yet, he’s now moved up to Double-A, and has taken his game to a whole new level through the first 20 games of the season. Manny Aybar better start looking over his shoulder with both Albies and Dansby Swanson soon ready to take Atlanta by storm. Yes, Aybar was brought in as a short-term solution, but that period may become vastly more truncated than originally anticipated.

By RotoRob
Tags: MLB, Prospects, Ryan McMahon
This entry was posted on Friday, April 29th, 2016 at 8:54 pm and is filed under 2016 RotoRob MLB Draft Kit, BASEBALL, Prospects, RotoRob, Scouting Report. You can follow any responses to this entry through the RSS 2.0 feed. Both comments and pings are currently closed.