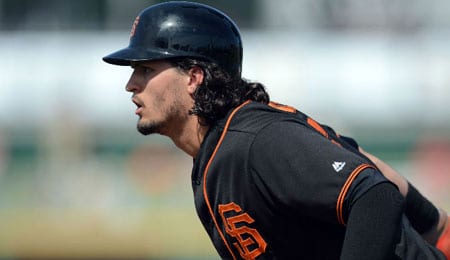 Jarrett Parker is going to get a chance to play a lot for the Giants. (knbr.com)

Welcome back to another week of Fantasy baseball. With JB needing to hit the books, the Wire Troll duties fall to your crusty old editor today.

This week, the Pale Hose sent a message that they are all-in by trading for James Shields; Mark Teixeira’s lousy season got even worse thanks to torn right knee cartilage; and Cory Seager became the first Dodger rookie to go yard three times in a game since Don Demeter did it over 55 years ago.

And now to this week’s Fantasy baseball waiver wire recommendations.

Jarrett Parker, OF, San Francisco Giants (ESPN: 0.6 per cent; CBS: 5 per cent): With Hunter Pence (hamstring) out for the next two months and Angel Pagan also sidelined, Parker has taken over RF for the Giants. Parker was up for a while last year, and hit extremely well (aided by a ridiculously high BABIP). His numbers have normalized this season, but he’s likely to continue to get a fair amount of PT while San Francisco’s outfield is in tatters. Parker contributed a run on Wednesday (see video below) and then another on Friday as he starts to pick up steam.

Jed Lowrie, 2B, Oakland Athletics (ESPN: 12 per cent; CBS: 18 per cent): The versatile Lowrie has always been a solid BA man, but has particularly shone in that regard this season. With hits in nine of his last 10 games — interrupted by an injury — he’s raised his average to .311, and smacked his first dinger of the year on Saturday in the ninth inning to force extra innings. Lowrie is usually good for a bit more pop than he’s shown so far, so expect a regression in BA, but an increase in extra-base knocks.

Will Harris, RP, Houston Astros (ESPN: 11 per cent; CBS: 13 per cent): With Luke Gregerson imploding of late (five blow saves in the last three weeks and change), smart owners are investing in Harris. Yes, given how much Houston paid to get Ken Giles, he’s got to be in the mix as well, but when you consider how well Harris is pitching, how can he not get the gig when the Astros finally make a change? All Harris has done is toss 24 straight scoreless outings. This dude was cast aside by Arizona, Oakland and Colorado, but sure has found his game in Houston, recording a 1.49 ERA in over 90 appearances since arriving last year.

Jon Gray, SP, Colorado Rockies (ESPN: 21.2 per cent; CBS: 50 per cent): Gray has always shown sweet strikeout potential, and while his bottom line results leave something to be desired, you’ve got to love that K/9 rate of 9.7. Obviously, you want to sit him at home (6.65 ERA), but he’s a decent road play — especially Sunday in San Diego. For the first time in his career, he’s on a winning streak, so even if you’re just looking for a streaming or DFS option, Gray could be gold.

Javier Baez, 3B, Chicago Cubs (ESPN: 14.5 per cent; CBS: 36 per cent): Baez is slowly earning more PT, having started two of the last three games and scheduled to be in the lineup again on Sunday. The hard-swinging utility man has capitalized on his recent extra action, slapping two hits including a two-run homer as part of a three-RBI night against the Dodgers Thursday and then following that up with a two-run double and a run on Friday. Baez is going to become a more integral component of the Cubs’ attack as the season goes on, so give him a look in NL-only leagues or deeper mixed formats.

Jeff Locke, SP, Pittsburgh Pirates (ESPN: 8.6 per cent; CBS: 16 per cent): Atlanta’s 2006 second rounder is finally turning things around after a very rough start to the season. Last week, he hurled a three-hit shutout at the Fish and the followed that up Saturday with a quality outing to win his fourth straight start. The dingers are an issue and Locke’s K/9 has plummeted this season, but he’s winning and will provide you with a solid WHIP while he remains hot.

Jurickson Profar, 2B, Texas Rangers (ESPN: 16.3 per cent; CBS: 35 per cent): Brought up to fill in while Rougned Odor served his suspension, Profar has done well enough to stay, although it’s unclear how much PT that will translate into. Formerly the team’s top prospect, Profar is back in the bigs for the first time since 2013 and is making up for lost time, scoring 10 runs in just eight games, six of which have seen him deliver multiple hits.

Nick Franklin, 2B, Tampa Bay Rays (ESPN: unowned: CBS: 1 per cent): Franklin has been called up with Brandon Guyer landing on the DL and the promotion is well deserved as Franklin has been scorching at Triple-A, batting .350 with two homers, seven RBI and eight runs over the last 10 games. Remember, heading into 2015, Franklin was still considered a top 40 shortstop.

Mike Pelfrey, SP, Detroit Tigers (ESPN: 0.8 per cent; CBS: 3 per cent): Pelfrey’s been pretty luckless so far this year, but finally bagged his first win of the season on Saturday as he starts to build some momentum.

Shane Greene, SP, Detroit Tigers (ESPN: 0.9 per cent; CBS: 9 per cent): Now that he’s off the DL, Greene has been shifted to the bullpen and he earned a hold with a hitless inning while fanning two on Saturday. He wouldn’t be the first failed starter to really shine as a reliever, plus the move might finally allow him to stay healthy, so watch this one.

By RotoRob
Tags: Chicago White Sox, Fantasy Baseball, James Shields, Jarrett Parker, Mark Teixeira, San Francisco Giants
This entry was posted on Sunday, June 5th, 2016 at 1:40 pm and is filed under BASEBALL, RotoRob, The Wire Troll. You can follow any responses to this entry through the RSS 2.0 feed. Both comments and pings are currently closed.