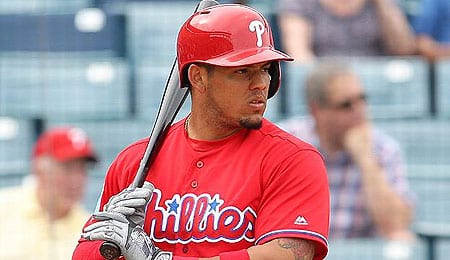 Jorge Alfaro came over in the Cole Hamels trade. (milb.com)

Welcome back to the 2016 RotoRob MLB Draft Kit as we continue to count down our Top 75 Prospects. So while you Freddie Freeman owners fret, let’s review prospects 59 through 50.

59. Jorge Alfaro, C, Philadelphia Phillies (42): Alfaro is another prospect who slipped this year, though not as precipitously as Alex Jackson. Alfaro is a young Columbian catcher who was a key part of the booty Philly received when it parted with Cole Hamels last year. But Alfaro dealt with injuries last year, and didn’t hit great while active, hence his slip. Early on this season, he looks very productive as he tries to establish himself as the Phillies’ catcher of the future… a future that is coming very soon at this rate (especially with his hot start that included a four-hit game, the last of which had him showing he can even beat out an infield knock — see video below).

58. Dylan Bundy, SP, Baltimore Orioles (16): Bundy slipped dramatically in this year’s rankings as 2015 was yet another season in which he barely pitched — and didn’t even win a single game. He earned a job as a reliever with the Orioles out of spring this season, but has barely pitched early on. Bundy is young enough to still have a great career, but as an injury prone, seldom-used reliever, it’s small wonder he plummeted in our rankings.

57. Javier Guerra, SS, San Diego Padres (NR): Guerra flashed some intriguing power at Low-A at the age of 19, landing on the prospect map as a result. He’ll need to address his swing and miss issues — especially as he moves up the ladder. Guerra’s strength is his glovework at short, and while the former Red Sox prospect is off to a slow start offensively at High-A this year, he could be part of the next wave of young shortstops that will soon (and already is) taking the bigs by storm.

56. Victor Robles, OF, Washington Nationals (NR): Another newcomer to this year’s list, Robles has a knack for delivering big hits. He has that lean centre fielder type of body and plays with great confidence that belies his tender age. Robles is probably two years away from the bigs, but projects as a high average hitter with great speed and a fantastic arm. He’s the kind of prospect that can change the game with his defensive skills and after proving he can hit at short season ball last year, this season he’s taking on a full season league, and the early results suggest it’s not too big a jump for him at all.

55. Manuel Margot, OF, San Diego Padres (60): Margot has moved up slightly this year after a season in which he was productive despite missing some time and winding up in a different organization following an offseason deal. He has enough arm to stay in centre, and will gun down runners that don’t respect his ability to throw. Margot is adjusting slowly to Double-A, but this young Dominican may ultimately offer decent power, great basestealing ability, a fine BA and very strong plate discipline.

54. Hunter Harvey, SP, Baltimore Orioles (39): Harvey slipped in the rankings after missing all of 2015 with arm woes, and now he’s dealing with groin issues. Still, when healthy, he’s shown tremendous strikeout potential, but we’re still waiting for Baltimore’s 2013 first rounder to make his High-A debut. Let’s hope the durability issues don’t affect his ability to reach his ceiling because this kid is one of the top prospects the O’s have.

53. Braden Shipley, SP, Arizona Diamondbacks (32): Shipley is another hurler that slid in this year’s rankings as last season his WHIP was up at Double-A. Still, it’s not as if Arizona’s 2013 first rounder (15th overall) was bad; he was just passed by several other prospects. A University of Nevada product, Shipley is a superb athlete with a plus fastball. Now at Triple-A, he looked very sharp in his season debut and if that continues, he’ll force his way up the big leagues at some point this year.

52. Mark Appel, SP, Philadelphia Phillies (25): Appel is the third straight pitcher on this list that lost a lot of traction in the past year. Originally drafted by the Pirates in 2012, he failed to sign and went back into the draft, getting taken first overall the following year by Houston. Last year, Appel proved he can win at both Double-A and Triple-A and he managed to stay healthy, but he continues to give up too many hitS and miss too few bats for a guy with his stuff. He looked very sharp in his season debut at Triple-A, however, and now that he’s in the Phillies’ organization, the door is wide open for him to get to the majors quickly if he can continue to succeed.

51. Billy McKinney, OF, Chicago Cubs (NR): Oakland’s 2013 first round pick has landed on the list after improving his contact rates and batting .300 between High-A and Double-A last year. The progress he made gives the Cubs — who acquired him in 2014 in the Jeff Samardzija trade — a further embarrassment of riches. McKinney started slowly back at Double-A this year, but seems to be coming on lately. The modest speed he showed in previous years dried up last year, but in time he should supply decent pop with a very fine batting average. McKinney will be the kind of player that provides a bit of everything without necessarily excelling in any one thing.

50. Andrew Benintendi, OF, Boston Red Sox (NR): Another outfielder that’s found his way onto the list this year, Benintendi was really off the Fantasy radar until Boston’s first rounder last year enjoyed a superb pro debut. He showed fantastic patience and a sweet power-speed-average combo. The fact that Benintendi was even better after a promotion to Class-A was particularly encouraging. While some consider him a top 20 prospect, we want to see what he does at higher levels before completely jumping on his train. Having said that, the fact that Benintendi has been bumped to High-A this year and is making a mockery of the Carolina League in the early going has us wondering if we were being too conservative here. Let’s put it this way: given his current trajectory, he has a chance to be much, much higher on this list in 2017.

By RotoRob
Tags: MLB, Prospects
This entry was posted on Saturday, April 16th, 2016 at 5:53 pm and is filed under 2016 RotoRob MLB Draft Kit, BASEBALL, Prospects, RotoRob, Scouting Report. You can follow any responses to this entry through the RSS 2.0 feed. Both comments and pings are currently closed.