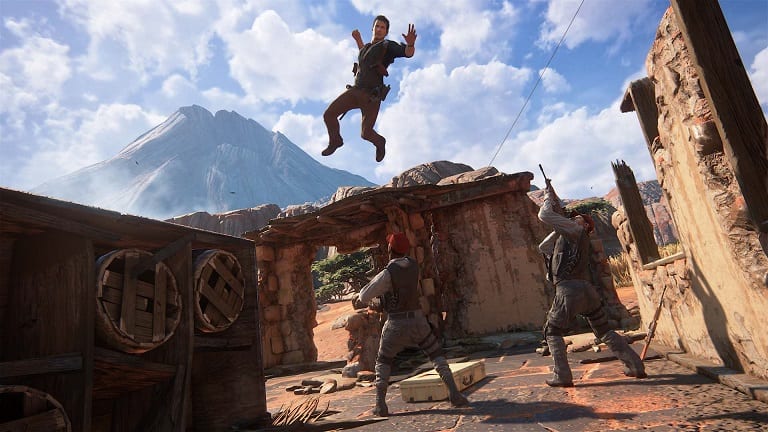 After years of waiting and several delays, Uncharted 4: A Thief’s End is finally here. Nathan Drake’s swansong wowed demo viewers at E3 and is one of the most anticipated releases of 2016. Does it live up to the hype? It’s safe to say that Naughty Dog has once again crafted an immense and epic experience, one that will be remembered as being a shining example of what the PS4 — and games — are capable of.

Series veterans will find familiar controls when launching Uncharted 4, while newcomers should expect a pretty standard cover-based shooter. The series has a history of questionable aiming, and Naughty Dog has included a number of options to allow for customization, including aiming sensitivity and optional auto-lock. We found ourselves turning the sensitivity down and leaving auto-lock off before feeling really comfortable.

Combat is augmented by a greater presence of optional stealth. To help with this, there’s a new target marking system, which is done by tapping the left analog while aiming. Climbing and movement largely feel the same, which is solid. In fact, those new to the series may marvel at how Naughty Dog can create such a clean-feeling movement system while Ubisoft’s similar versions are always clunky.

A big addition to Uncharted 4 is vehicles, which are thrown at you in the opening scene. The control scheme is largely cribbed from standard templates — triggers handle acceleration/brake while face buttons handle hand brake and entry/exit. The game doesn’t go for realism with vehicles, so you won’t have to worry about differences in vehicle size and weight.

Instead, all vehicles feel more or less like user-friendly Grand Theft Auto cars/boats — nothing groundbreaking but certainly functional for the purposes of Uncharted’s breakneck pace. In fact, the only reason the vehicles suffer is uncharacteristically clunky level design, not the controls.

Simply put, Uncharted 4 is the best looking game of this console generation to date. In fact, it may even hold that title at the end of the console cycle. From model detail to lighting to environment to animation — despite a range of locales and scenes — there’s so much polish in this that it’s an end to end visual feast.

Naughty Dog has included a camera mode activated by tapping both analog sticks, and you may get caught up in freezing the action and playing with the camera because the game is so darn pretty.

Of course, half of the charm of Uncharted comes from its sterling characters, and that is heavily based on the voice actors. It’s a who’s who of the voice acting community, as series stalwarts Nolan North, Emily Rose and Richard McGonagle are joined by Troy Baker (who also played Joel in Naughty Dog’s The Last of Us) and Laura Bailey. All deliver excellent performances that meet the series’ high standard.

Naughty Dog must have realized that the PS4’s base includes a lot of Xbox 360 converts, so the game’s first 2-to-3 hours act as both an extended tutorial and series recap. It’s an unusually slow start, but things get rolling from both a narrative and gameplay perspective once Drake and his crew head to Italy. After that, the game goes all over the world with its trademarked blend of shooting, exploring, climbing and puzzles.

Climbing has always been part of the Uncharted series, but the game delivers a number of ways to keep things fresh while still providing unique timing challenges, particularly one specific set piece inside a massive clock tower (eat your heart out, Castlevania).

These sequences are usually the right length, though it does bog down a little in the middle when it feels like each of the climbing bits is just a tad too long, despite the use of a Batman-esque grappling hook — which, in this world, is basically the equivalent of Indiana Jones’ whip.

At least Naughty Dog smartly uses this time to push the story forward. In most cases, you’re paired with an AI character, so character or story exposition is often heard while climbing or exploring. Another new feature is the ability to choose dialogue options. This doesn’t pop up too often and won’t affect the game much, but it’s fun to explore.

Of course, Uncharted is probably best known for epic set pieces and relentless pacing. Its level design is often what sets it apart from competitors, and even when you’re physically in a static location for a battle, the game maintains a constant sense of momentum.

Level spaces are often wider in scope, and the addition of a stealth mechanic — including the ability to hide in tall grass and gauge enemy awareness via colour codes — opens up gameplay to customize your approach.

You can go in guns blazing, stealth through everyone, or a mix of the two — or, in some cases, simply run like hell and hope for the best. The options are more flexible than ever, allowing you to take agency over the pace and strategy for the tasks ahead.

The final major addition is the use of vehicles. In some cases, these are provided to traverse large amounts of terrain and different environmental areas while you soak in the game’s beautiful visuals or characters banter between them. There’s even a few very intense action sequences built around the vehicles.

However, one of the game’s few missteps belongs to the vehicular segments — specifically, the four-wheel equivalent of climbing. Climbing is usually fun in these games because there’s an element of freedom. Driving around to find the right path up a muddy hill isn’t fun. It’s actually quite annoying, mostly because cars don’t have the nimble movement people do. Fortunately, these are relatively short and the game provides hints when you’re stuck.

Naughty Dog is known for its meticulous quality across the board, and Uncharted 4: A Thief’s End succeeds here. From characters to story to set pieces to the new mechanics, it’s a fast-paced and beautiful adventure grounded in character moments and epic action. Despite a few forgivable missteps, Nathan Drake’s final (?) adventure is a clear contender for Game of the Year.