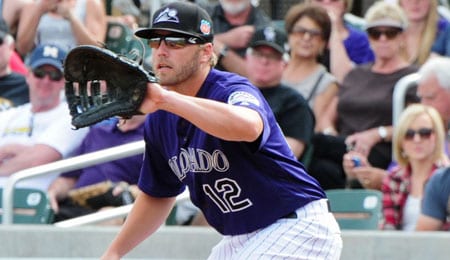 Mark Reynolds seems to have the first base gig in hand for the Rox. (Matt Kartozian-USA Today Sports)

Welcome back to The Wire Troll for Week Seven, as we discuss waiver wire recommendations for your season-long Fantasy baseball teams.

In the last week, David Ortiz and the Red Sox continued their offensive onslaught; Bryce Harper exposed more entertaining on-the-field antics; Jake Arrieta remained absolutely filthy; and the Orioles were still unable to not hit bombs. Now let us take a look at players that are sitting on the waiver wire in your leagues that could provide a spark to your team.

Jason Castro, C, Houston Astros (ESPN: 9.9 per cent; CBS: 34 per cent): Castro has been tearing it up recently, scoring 10 runs in his last 10 games, to go along with two homers and a sexy .323/.447/.613 slash line. The Astros are committed to giving him ample opportunities behind the dish, even against southpaws, despite the fact he’s batting an embarrassing .050 against them. Castro bats ninth in the order, but that is not necessarily a bad place to be with Jose Altuve, George Springer, and Carlos Correa around the turn. If Castro keeps getting on base at a great rate, he should continue this gnarly runs scored pace, which is quite valuable at the catcher position. Oh, and it doesn’t hurt that he flashes a rifle arm from time to time (see video below).

Mark Reynolds, 1B/3B, Colorado Rockies (ESPN: 7.7 per cent; CBS: 14 per cent): On Friday, the Rockies optioned Ben Paulsen to Triple-A, opening the door for Reynolds to continue to see consistent playing time at first base. The 33-year-old Reynolds has impressed this season, hitting .333 with a .387 OBP. The Rockies have scored the fourth most runs in the league this season, and third most against lefties. This is largely in part thanks to the signings of veteran right-handed hitters Reynolds and Ryan Raburn last offseason. With this new opportunity at playing time for Reynolds, you do not need to be reminded that a starter that plays half his games in Coors Field can provide plenty of Fantasy production. As long as he’s starting for the Rockies, he should not be sitting on the waiver wire in standard leagues.

Martin Prado, 2B/3B, Miami Marlins (ESPN: 24.4 per cent; CBS: 41 per cent): Prado has quietly been having an excellent campaign. He’s boasting a .373 BA and only nine strikeouts, with zero in the last five games. One of the great perks of owning Prado, besides the great MI/CI position eligibility, is the spots Manager Don Mattingly hits him in the lineup. Prado has spent 19 games batting in the two hole, and 11 games hitting fifth. This dispersion really helps drive his all-around Fantasy contribution, which is evident by his almost even total of runs and RBI (11 and 10, respectively). So if you are in need of infield help, or could use a boost to your team’s BA with modest help in the other categories, Prado is your man. The lack of homers so far this season may scare off Fantasy owners, but the way we look at it is this: Prado has never hit less than nine dingers in a full season. Be patient, and all that solid contact will eventually translate into a few trots around the bases.

Jameson Taillon, SP, Pittsburgh Pirates (ESPN: 4.1 per cent; CBS: 30 per cent): Taillon has been cruising along in Triple-A this season, boasting a 2.08 ERA through seven starts while striking out a batter per inning. Many Fantasy owners have forgotten the 6’5″, 240-pound monster after the dreaded Tommy John surgery ended his 2014 season, and season-ending surgery on a hernia interrupted his 2015. But even with top Pirate prospect, Tyler Glasnow on his team, Taillon is the one drawing all the attention. In the big leagues, both Jonathon Niese and Jeff Locke are rocking ERAs above 5.00, and even after a stellar start, Juan Nicasio himself has started a downward trend. If the Pirates find themselves in a race for a playoff spot, it would be hard to believe they would keep these two studs down if the rotation is still struggling. If your league allows an “NA” roster spot, or some minor-leaguer equivalent, Taillon is an excellent option as a high upside stash.

Ryan Buchter, RP, San Diego Padres (ESPN: 2.5 per cent; CBS: 2 per cent): Buchter had only one inning in his career at the major league level prior to being signed by the Padres in the offseason. Fast forward a month and a half, and the 29-year-old lefty has only allowed one earned run in 17 innings. Buchter’s 12.2 K/9 proves his electric stuff, and on Thursday, Manager Bud Black proved his trust in his new reliever by giving Buchter his first career save opportunity with closer Fernando Rodney unavailable. Although Rodney has been great so far this year, we all know how quickly things can change in the bullpen, and now we know who might get the first crack at saves in San Diego following a shake up. If you punted saves in your draft, go ahead and take advantage of the great ratios and ERA help from Buchter, and monitor Rodney like a hawk.

By JB Branson
Tags: Colorado Rockies, Mark Reynolds
This entry was posted on Sunday, May 15th, 2016 at 6:51 pm and is filed under BASEBALL, Jordan Branson, The Wire Troll. You can follow any responses to this entry through the RSS 2.0 feed. Both comments and pings are currently closed.