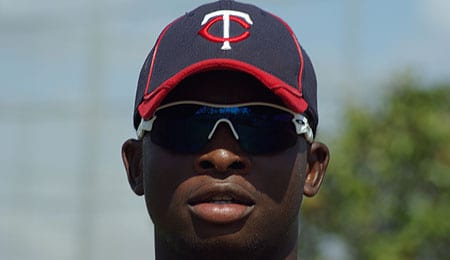 The 2013 RotoRob MLB Draft Kit nears completion today as we release another part of our Top 60 Prospects.

So while you marvel at Yu Darvish’s start to the 2013 season, let’s take a close look at prospects 20 through 11.

20. Miguel Sano, 3B, Minnesota Twins (24): As we discussed in our 2013 Minnesota Twins Season Preview, Sano impressed us with his move to full season ball last year, hence his getting bumped up to the top 20. While many consider him a top 15 prospect, we’re waiting to see how he adjusts to the higher levels before jumping completely on his train. Sano’s power has seduced many, but if he moves to first base or the outfield as some expect, his overall prospect status will dim somewhat (especially since he’s already moved away from his original position at shortstop). We love the counting cat numbers he racked up at Class-A last year and he’s caught the eye of the film industry as one of the players followed in the documentary Player: Pelotero. The Twins’ top prospect was amazingly productive last year and as we alluded to, his power potential is elite. Sano’s contact rate has improved slightly as he’s moved up the ladder, but he still whiffed 144 times in 129 games last year and as he rises in the system, that’s going to prove more problematic.

19. Mike Olt, 1B/3B, Texas Rangers (NR): When Olt arrived in the Show in August, we offered our opinions of what to expect in a Podcast. There’s no room for him in Texas yet, so he’ll continue to man third base at Triple-A and see some action in the outfield as well as the team seeks ways to get his bat to the bigs. This kid has major right-handed power potential, although he failed to make much of an impression in the majors last year (of course, a heel injury didn’t help matters). Even with their losses this offseason, the Rangers still have tons of talent at the big league level that continues to block its plethora of minor league talent. It’s a good problem to have, but sucks for keeper league owners of Olt. The 24-year-old, a 2010 supplemental first rounder (49th overall) was a monster at Double-A last year and has elite power but may struggle to make contact. A former University of Connecticut star, Olt’s ticket to the Show will come when Adrian Beltre leaves or gets hurt or Olt is shifted to another position. His time will come. Soon.

18. Trevor Bauer, SP, Cleveland Indians (11): Arizona has amassed an impressive arsenal of young arms, but dealing one of its best away for a pittance to the Indians in a three-team deal wasn’t the wisest move we’ve ever seen. Bauer failed to make Cleveland this spring, getting sent down to Triple-A, but he won’t be kept at bay for long. Last year he made his MLB debut for the D-Backs and other than some control issues, he really held his own. Once Bauer learns to limit the baserunners, he’ll be ready to stick in the Show. Obviously, his dip in velocity from a year ago is a worry — and the main reason we lowered him slightly in the rankings this year. Last year, Bauer dominated Double-A, forcing a promotion to Triple-A, where he continued to rack up wins. The third overall pick from 2011 got some valuable experience in the high minors last year and we really like his strikeout potential, but he’ll have to watch the long balls once he arrives in the majors. A combined 12-2 mark with a 2.42 ERA in the minors last year suggests that Bauer is very near to earning a full-time big league job. Expect to see him make at least a few starts for the Indians this season.

17. Francisco Lindor, SS, Cleveland Indians (47): Last year, when we ranked Lindor just inside the top 50 in our Top 55 Prospects, we suggested that he didn’t have major power and could wind up as a two-hole hitter. Well, the eighth overall pick from 2011 flashed slightly more pop last year, but it’s clearly not a strength (.355 SLG, .098 ISO). Still, Lindor projects as a key component of the double play combo of the future in Cleveland and will likely bag some Gold Gloves before all is said and done. He’s likely capable of hitting for a higher average than what he showed last year at Class-A, but he got some valuable experience in full-season ball at the age of 18, which is just so damn impressive. We love Lindor’s contact skills, but as we mentioned, power is not really his forte. The Puerto Rico high school product shows nice batting skills from both sides of the plate.

16. Shelby Miller, SP, St. Louis Cardinals (4): We recommended Miller as a waiver wire pick in September, and it was a nice call as he looked superb in his first taste of the Show, pitching mostly out of relief but also making one brilliant start to close the season. He offered value even in that brief look, whetting our appetite for his rookie season this year, as he won the Cardinals’ fifth starter job this spring. St. Louis’ top pitching prospect has been a consistent winner in the minors and he seems to have really grown up since an altercation a year and a half ago that resulted in a suspension. Last year, Miller moved up to Triple-A and the 2009 first rounder (19th overall) showed improved control while jacking up his K rate — a tremendously promising trend. We absolutely love his strikeout potential, but worry somewhat about his gopheritis. Miller’s fastball and curveball are good enough that he may one day be the ace of the Cards.

15. Xander Bogaerts, 3B/SS, Boston Red Sox (37): When we slotted Bogaerts just inside the top 40 in our Top 55 Prospects a year ago, we wrote about him being pretty low in the system, but having massive upside. Well, after kicking ass at High-A and then doing even better at Double-A, he’s a hell of a lot closer now, hence his major hike up the rankings this season. After a solid showing in limited action this spring as a non-roster invite, Bogaerts was reassigned to minor league camp, and will look to build upon the impressive power he flashed last season. Of course, he spent much of spring competing for the Netherlands in the WBC. As mentioned, we loved the power Bogaerts flashed last year, and he also displayed a bit more speed, although that remains his weak link. Signed as an undrafted free agent out of Aruba in 2009, he has a chance to be just the fifth player from that country to reach the bigs.

14. Christian Yelich, OF, Miami Marlins (44): In the not too distant future, Yelich will combine with Jake Marisnick to form the majority of what will be a studly outfield in Miami. Yelich absolutely tore it up this spring, but the cheapo Marlins reassigned him to minor league camp rather than start his service clock. This dude has serious power and some pretty awesome speed, too (20 steals at High-A). A first round pick in 2010, Yelich will start this year at Double-A, but he could force his way to the bigs by the All-Star Game. Last year, he hit .330 with sweet extra-base pop and nice speed while improving his contact rates. Yelich projects as a seriously high average hitter, but we’d like to see even better contact this season. He’s tall (6’4″) and when he fills out, the power will really take off.

13. Jameson Taillon, SP, Pittsburgh Pirates (10): After reaching the top 10 prospects last year, Taillon slipped slightly this year despite showing some nice progress. After looking so good at the WBC, he’ll open this season at Double-A. The second overall pick in 2010, Taillon racked up lots of innings at High-A before moving up to Double-A and going undefeated in three late-season starts. He has simply nasty stuff, including a fastball that can reach the mid-90s that he pairs with some excellent breaking pitches. A combined ERA of 3.55 last year tells us that Taillon is just a little bit of seasoning away from arriving in the Show. Control — and limiting baserunners — will be Taillon’s ticket, but we’re worried about his ability to keep the ball in the yard, and we’ll be tracking that as he gains experience in the higher levels. Still, that fastball and curveball will take him very far and if he can develop his changeup, nothing will stop him.

12. Jose Fernandez, SP, Miami Marlins (NR): Talk about a breakout season. Fernandez really burst onto the prospect radar in his first full campaign last year and this spring he’s already had an impact on the Marlins (albeit, not in a good way — beaning Giancarlo Stanton in an intrasquad game). A couple of weeks after that episode, Fernandez was sent down to minor league camp, however after a couple of injuries to potential starters, he found himself part of the Opening Day rotation. The top prospect on a stacked Marlin system, he is still just 20 yet he absolutely blew away opponents in both Class-A and High-A last year. After going undefeated at Class-A, Fernandez got some very good experience at High-A and now looks poised to lead the next wave for the Fish as the gutted big league squad will soon be overwhelmed by prospects. Overall last season, Fernandez recorded a ridiculous 1.75 ERA, proving he’s ready for the higher levels in the minors (the majors, however, may prove a tough jump). Miami’s first rounder (14th overall) in 2011 doesn’t seem to lack any skills. His ability to limit baserunners is elite and the only even remote area of concern was an increased walk rate in High-A. It’s hard to believe that many thought the Marlins reach for this righty in the draft. So far, he’s completely justified his slot.

11. Nick Castellanos, OF/3B, Detroit Tigers (NR): We got an eyeful of Castellanos at the AFL last year, and really liked what we saw. While he could use another year of seasoning to learn left field, his bat is already major league ready, as evidenced by a .360 onslaught this spring before he was sent to minor league camp. He may not ever be a major home run masher, but Castellanos looks like he’s capable of hitting for very robust batting averages. He tore though High-A in less than half a season, forcing his way up to Double-A, where his counting cats were unsurprisingly reduced. Detroit has no plans to rush Castellanos, but outfield isn’t a terribly tough position to adapt to, so it won’t be long before he’s knocking on the door of Comerica Park. A supplemental first rounder in 2010, he hit a combined .320 while flashing decent pop last year. Don’t expect much speed, and drawing walks is not really Castellanos’ thang, either, but we could see this dude making consistent appearances on the top 10 batting leader list. Easily Detroit’s top prospect, he just turned 21 last month and is already threatening to bag a big league job. It’s been quite a while since the Tigers had a hitting prospect this exciting.

Crave more in-depth Fantasy analysis? Then join us every Thursday at 9 p.m. EST for RotoRob’s Fantasy Baseball Weekly Podcast on Blogtalkradio. Tim McLeod and I will entertain and edify you for a half hour or more each week. We’re off this week for to attend the Philadelphia Flyers game, but will return on April 11. Tune in here.

By RotoRob
Tags: Miguel Sano, Yu Darvish
This entry was posted on Wednesday, April 3rd, 2013 at 5:46 pm and is filed under 2013 RotoRob MLB Draft Kit, BASEBALL, Prospects, RotoRob. You can follow any responses to this entry through the RSS 2.0 feed. You can skip to the end and leave a response. Pinging is currently not allowed.